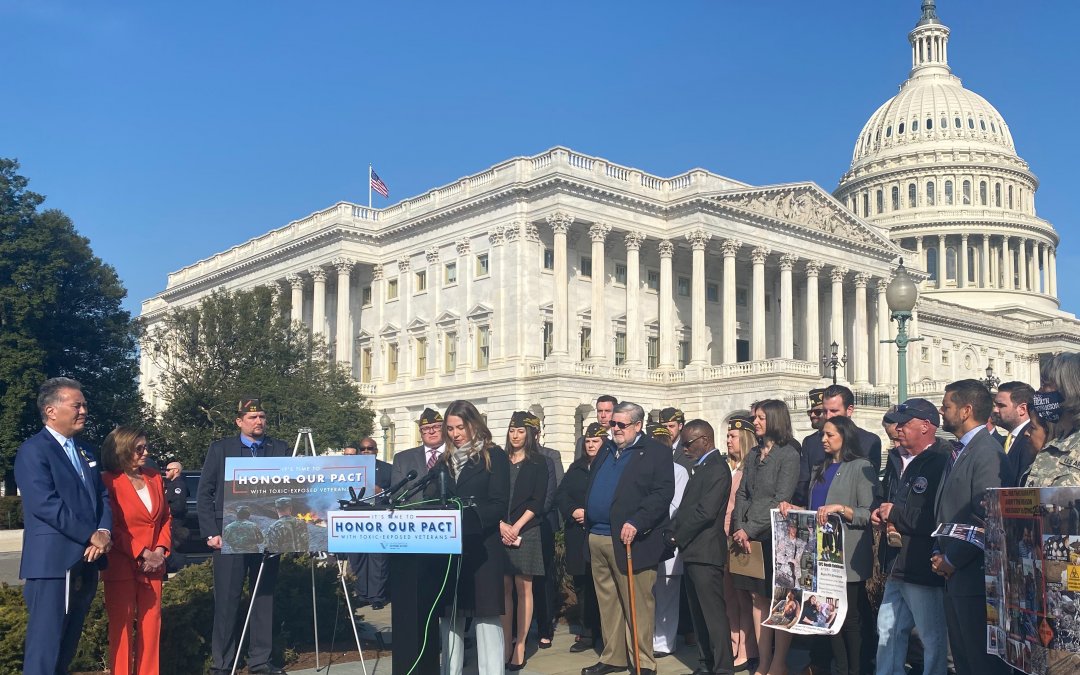 Jen Burch, a communications associate at Iraq and Afghanistan Veterans of America, speaks at a March 2 press conference in support of the Honoring Our PACT Act. Burch, an Afghanistan veteran, has experienced painful medical conditions as a result of toxic exposure while serving. (Charlotte Vernes/MNS)

WASHINGTON –– When Jen Burch first returned from a tour in Afghanistan nearly a decade ago, she was seriously sick.

Her temperature was so high that it was flagged going through the airport en route to Okinawa, her home base at the time. When she arrived, she took a cab straight to the ER, where she was diagnosed with pneumonia and bronchitis. Since then, Burch has endured painful migraines, post-traumatic stress disorder and significant weight loss as a result of toxic exposure.

“You know when you turn the car on and all the lights come on? That’s how I felt,” Burch said.

Toxic exposure occurs when military members are exposed to harmful chemicals and toxins while serving. For Burch, it was burn pits in Afghanistan. For Vietnam veterans, it was Agent Orange. For World War II veterans in Japan, it was radiation. Exposure to such toxins can cause wide-ranging, long-term health impacts.

But the U.S. government has historically moved slowly to address such conditions. Following the Vietnam War, it took over a decade of advocacy and lawsuits to prompt the Department of Veterans’ Affairs to recognize the damaging effects of Agent Orange.

Now, over 20 years since the U.S. invaded Afghanistan, granting benefits to toxic exposed veterans is gaining momentum. President Joe Biden addressed it during the State of the Union, announcing nine new medical conditions the VA will link to toxic exposure. Both the House and Senate have passed varying versions of toxic exposure legislation.

“For one of the first times, it feels like we’re being seen,” Burch, now an advocate for Iraq and Afghanistan Veterans of America, said. “It’s been a journey. I’ve been out of Afghanistan for 10 years now. But there’s other vets who have been out even longer, who have been battling this for much longer than I have, that have gone through some pretty tough hardships to get where they are. Unfortunately, some veterans have died.”

The Senate version, Health Care for Burn Pit Veterans Act, however, doesn’t link any medical conditions to toxic exposure, instead expanding the timeline for eligibility for VA health care to 10 years after service and training VA service providers to look for toxic exposure. The act is just one segment of a three-part legislative push, with plans to address connections between illness and service and expand benefits in the future.

With two different bills, veterans’ advocates and lawmakers are divided on where to go from here. Rosie Torres, founder of the veterans’ advocacy organization Burn Pits 360, said the expanded eligibility in the Senate legislation doesn’t go far enough.

“It’s a delay tactic,” Torres said. “That delay, deny, wait until you die tactic on behalf of the government, just to say, ‘We won’t give you compensation and the burden of proof will still be on you, but here’s some more health care.’ We know that the onset of these conditions [can be] more than 10 years. It’s not always 10 years, it could be 20 years when these issues start to surface.”

Burch called the House version the “most comprehensive” legislation Congress has ever created to address toxic exposure. She worries that the Senate’s idea of passing a three-part plan is not enough, saying breaking apart the legislation runs the risk that it might not pass in the future.

“You get the whole package there,” Burch said of the House version. “It’s not this cut-up part. [After] Vietnam, it took years, decades to get stuff passed and it would just be these tiny pieces. Instead of waiting decades and just slowly running smaller packages, let’s do it all now in one big one.”

Some leaders of the American Legion, however, said they would support either piece of toxic exposure legislation. Ralph Bozella, chairman of the American Legion’s Veterans Affairs and Rehabilitation Commission, said the two different acts don’t have to compete, saying he will be happy as long as toxic exposed veterans receive expanded health care.

Now, it’s up to lawmakers to figure out which piece of legislation to move forward with.

Rep. Mike Bost (R-Ill.), ranking member of the House Veterans’ Affairs Committee, has frequently criticized the price tag of the House legislation. In a March 3 statement, Bost took issue with the House passing the Honoring Our PACT Act rather than taking up the Senate’s legislation.

“Instead, House Democrats’ shoved the deeply flawed policies and wildly expensive costs of the PACT Act through the House with no regard for finding common ground,” Bost wrote in the statement.

House Speaker Nancy Pelosi (D-Calif.), however, condemned the idea that the cost should deter Congress from passing the House version. She said what the act will do for veterans should outweigh any price concerns.

“This is a cost of war that we should recognize when we go,” Pelosi said in a March 2 press conference outside the Capitol.  “And that is – there should be no question. Because this is not going to be expensive, it’s going to be worth it.”

In a statement, the Senate Veterans’ Affairs Committee said Chairman Jon Tester (D-Mont.) has been working closely alongside Ranking Member Jerry Moran (R-Kansas) and colleagues in the House to get “bipartisan, comprehensive toxic exposure legislation” through Congress as soon as possible.

The House Veterans’ Affairs Committee did not respond to multiple requests for comment.

Regardless of which legislation veterans’ advocates support, many are at a consensus: they want greater acknowledgement of toxic exposure, and they want it signed into law soon.

Torres, a supporter of the House version, said she feels the bill has the support of the White House and President Biden, who spoke about expanding presumptions during the State of the Union. Now, one priority of hers is to change Republicans’ minds that the bill is “fiscally irresponsible.”

“This battle is not going to be a battle because it’s non-partisan,” Dillard said. “Both chambers [were] all jumping in, so I think we’re in the right direction.”

Burch, now over a decade removed from her service in Afghanistan, was heartened by the passage of the House legislation. But she’s not ready to let the momentum slow anytime soon.

“Now the push is there,” Burch said. “It lifts your spirits, and it’s like, ‘Okay, we got a victory. Let’s keep going.’”