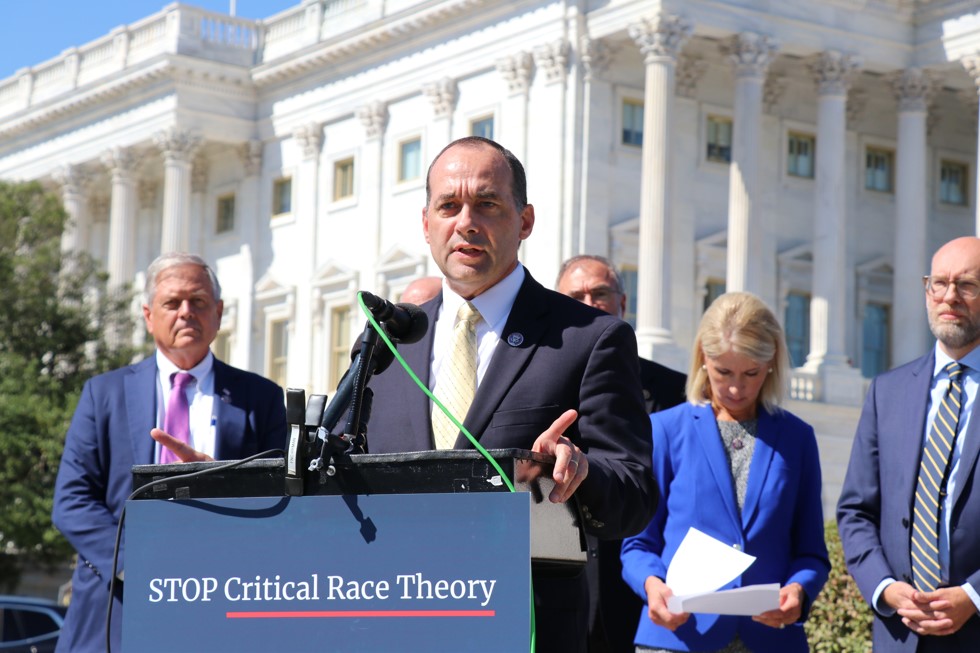 WASHINGTON — On a sunny Wednesday outside the Capitol, Republican Rep. Bob Good began a news conference about his bill to block federal funds for schools that teach critical race theory by saying Congress must be “diligent” in uncovering and eliminating such teaching in schools.

“It sees things through a racial lens, and it’s dangerous. It’s dishonest, and it’s very divisive to us as a nation. It ignores the tremendous history that our country has made,” Good said. “The progress that we’ve made as a nation was facilitated by our founding principles and increasingly realized over the past 245 years.”

His bill, co-sponsored by 17 Republican, lawmakers, all Republicans, would amend the Civil Rights Act to say that any use of federal money to teach critical race theory would be a violation of that law.

Good said he’d been called a racist during an Education and Labor Committee hearing for his opposition to CRT.

“Well, what if you are a racist?” yelled a bystander from across the street as the press conference was sidetracked by protesters. More soon joined in with shouts of “shame, shame, shame,” “what about my history,” and “Black history matters” — drowning out the voices of Good and others supporting his bill.

One of the protesters, Maria Perez, a state senator from New Hampshire, emigrated from El Salvador. Having put her kids through U.S. schools, she said teachers should be allowed to teach history without interference and that bills like Good’s give people an excuse to be racist.

“They have to leave the history alone. The teachers, they’re not calling kids bad names. We’re not calling white supremacy to the kids in school,” Perez said. “We don’t do that. We have respect for everyone. No matter how they look or how they speak. We expect them to do the same thing for us.”

“We want to make sure we have the dignity and right to teach our kids about our history,” Maria Perez, a New Hampshire state senator, said. (BAYLOR SPEARS/MNS)

“It’s essential that voices that have basically been suppressed in traditional ways of teaching in the United States be brought forward,” Wilson said. “An opposition to looking at history through the lens of race is basically trying to suppress a whole history and that’s not what America is about.”

The debate over critical race theory started in state legislatures and schools curriculums as states like Utah, Tennessee, Oklahoma, Texas and others started passing laws that restricted discussion of critical race theory in classrooms. Laws like one in Tennessee threaten to withhold aid from schools that promote concepts that teach that the U.S. is inherently racist or an individual because of race or sex is inherently privileged.

Good’s bill is one in a series of bills that have brought the critical race theory debate to the federal level. In September alone, House Republicans introduced three bills relating to the restriction of teaching critical race theory or mentioning white supremacy in schools.

Mary Kusler, director of advocacy at the National Education Association, said these bills are unlikely to go anywhere because school curriculum is more the purview of local and state governments and boards of education than of Congress.

But, she said, the consequences of the debate are felt in the day-to-day that teachers now have to deal with.

“This is a manufactured controversy designed to divide our communities, our families, our students along racial lines for purely political purposes,” Kusler said. “We are now seeing educators in local communities being targeted, simply for doing their jobs and teaching our full history.”