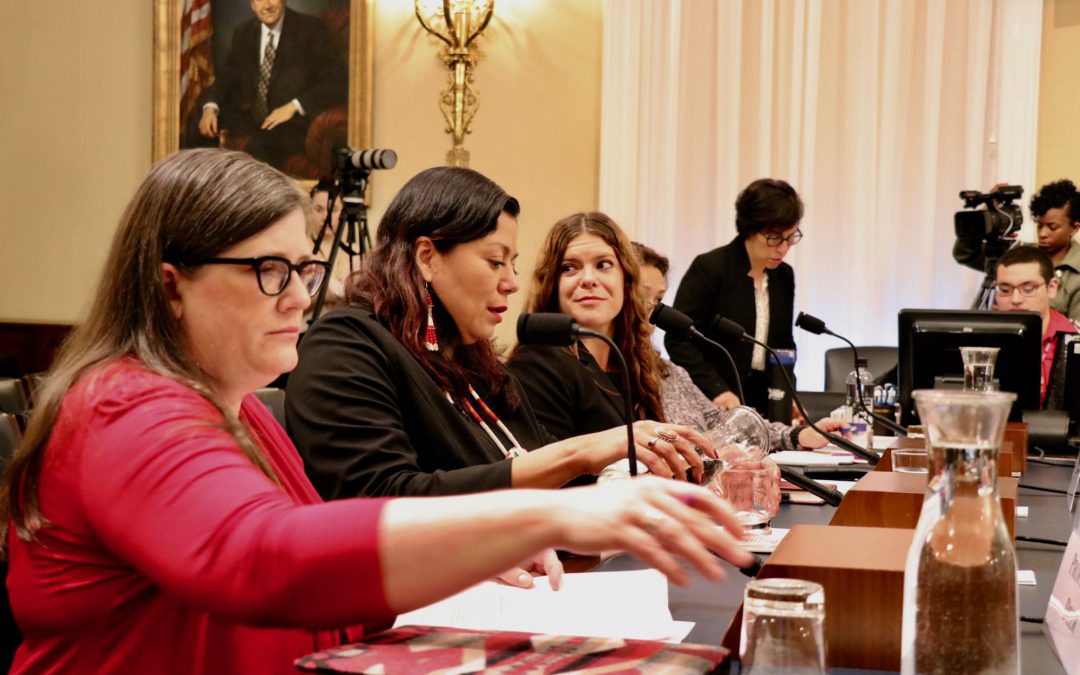 Tribal governments often have difficulty investigating and prosecuting cases due to jurisdiction issues —if the perpetrator is not a Native American, or the identity can’t be determined, “it paralyzes the tribal government from taking action,” said Mary Kathryn Nagle, a member of the Cherokee Nation of Oklahoma and legal counsel to the National Indigenous Women’s Resource Center.

“There’s a connection between tribal sovereignty and the safety of Native women,” she told the Indigenous Peoples Subcommittee.

A provision in the 2013 reauthorization of the Violence Against Women Act gave tribes criminal jurisdiction over non-Native Americans in cases involving them. The act expired Feb. 15, when a federal stop-gap funding bill did not include it. According to a 2018 National Congress of American Indian report on the jurisdiction provision’s first five years, 18 tribes exercise this special jurisdiction.

A 2010 report by the Department of Justice’s National Institute of Justice estimated that 97 percent of female Native American victims would experience violence by a non-Native perpetrator in their lifetimes, and 90 percent by an intimate partner of non-Native descent.

In situations where law enforcement does have jurisdiction over non-Native perpetrators, Nagle also decried their “lack of response.”

“Too often, it’s family members and friends searching [for missing and murdered Indigenous women], not law enforcement,” she said.

Ruth Buffalo, a representative in North Dakota’s state legislature and member of the Mandan, Hidatsa and Arikara Nation, spoke about leading the 2017 search for Savanna Lafontaine-Greywind, a 22-year-old who disappeared while eight months pregnant.

“[The local task force] thought, if and when this should ever happen again, we didn’t want to waste time in having to convince law enforcement that we are human beings, and that we deserve justice,” said Buffalo.

At Lafontaine-Greywind’s trial, Buffalo said that William Hoehn downplayed the disappearance, saying she was “always going missing.” In October, Hoehn was sentenced to life in prison with a chance of parole for his involvement in kidnapping Lafontaine-Greywind’s baby, which was cut out of her womb, but acquitted of charges for conspiring to murder her.

Sarah Deer, a member of the Muscogee Creek Nation, and professor of gender studies at the University of Kansas, said that Native Americans have a “well-founded” mistrust of law enforcement because of historical persecution.

“If [a missing woman] is not the perfect victim…, if she’s had an addiction problem, or she’s been homeless, or her children have been taken from her, and you go to urban or off-reservation police departments, oftentimes families tell us there’s just a shrug and a ‘Well, what did you expect?’” said Deer.

Witnesses also said that a lack of comprehensive data on these women could contribute to difficulties in investigating cases and locating missing women.

A compilation of statistics from the National Crime Information Center’s Missing Person and Unidentified Person Files reported that 322,865 women and 10,642 Native Americans were missing in 2017. There was no number given specifically for Native American women.

In 2016, there were 5,712 reports of missing Native women and girls, according to the center. Just 116 of them were logged into the Department of Justice’s federal missing persons database.

Deer highlighted the importance of data collection as another solution to the issue, but also emphasized the continued involvement of Native people themselves.

Deer said that the federal government could partner with Native-operated nonprofits like the Sovereign Bodies Institute, an open-source data collection service, but “it needs to be on the terms of the Indigenous people.”

“It’s critical that Native people are at the forefront of this effort,” she said. “Even if we were to receive federal funding, it still should be tribal members and families and survivors that should drive the data collection.”