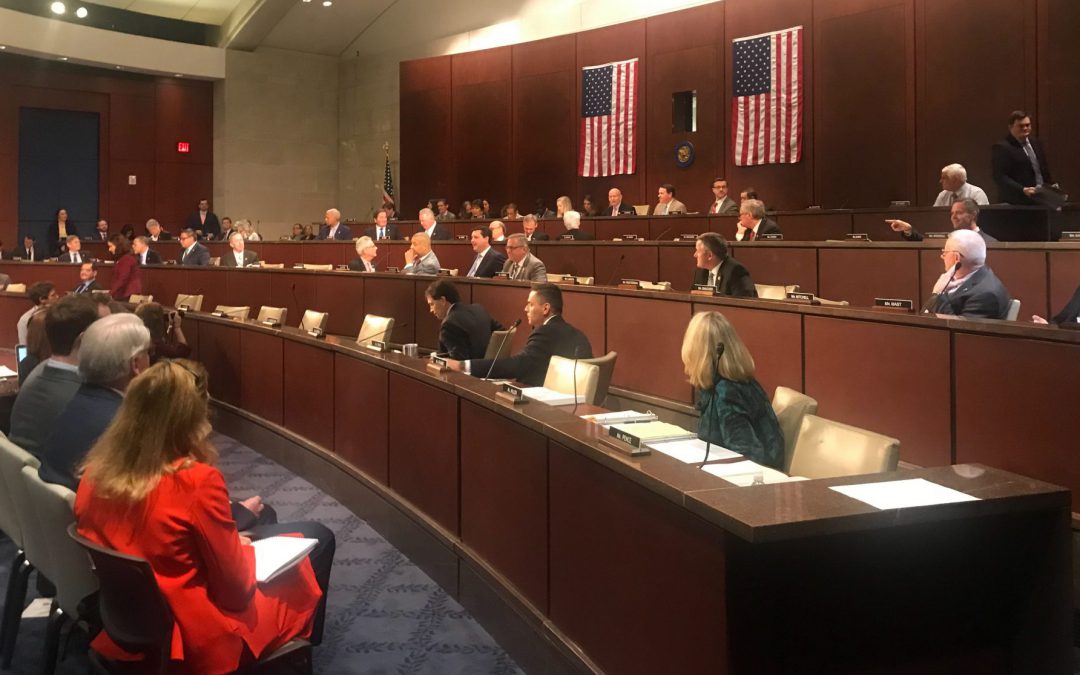 Lawmakers look on as the House Transportation and Infrastructure Committee begins its first hearing of the 116th Congress. (Leslie Bonilla/Medill News Service)

WASHINGTON — The federal government needs to invest in and repair aging American bridges instead of “limping along” with short-term partial fixes, roads and transit systems, said city and state leaders Tuesday at a House Transportation and Infrastructure Committee hearing.

Former Transportation Secretary Ray Lahood said that  “America is one big pothole… and you can only do so much by continuing to fill potholes year in and year out.”

To finance road investments, Lahood proposed an increase in the gas tax, which Los Angeles Mayor Eric Garcetti said he campaigned on.

“This is something that voters want,” Garcetti said.

The federal tax is currently 18.4 cents a gallon on gasoline and 24.4 cents a gallon on diesel. Unchanged since 1993, the tax is the primary source of funding for the Highway Trust Fund, which funds most government spending on roads and bridges. Indexing the excise to the cost of living would match it to the yearly rate of inflation.

If Congress had done this in 1993, Lahood said, “we wouldn’t be having this debate. We’d have the resources.”

Rep. John Katko, R-N.Y., said that the trucking industry is the biggest advocate of a gas and diesel tax increase, as the per-gallon fee would be outweighed by the money saved on maintenance and wear.

Underfunding infrastructure also contributes to road congestion, according to the American Society of Civil Engineers, or ASCE, which estimated that traffic in cost the country $160 billion in lost fuel and time in 2014 alone.

Minnesota Gov. Tim Walz called for stable and long-term federal funding for interstate infrastructure projects, saying, “If we can get some of that certainty, you’ll see us working together.”

“You don’t need to worry about the threat of reverberation from your constituents,” Lahood said. “Think of this as a jobs bill.”

ASCE estimates that states and the federal government must collectively invest $206 billion more yearly to maintain infrastructure in a safe, functional state. In a 2016 study, it found that, at the current rate of underinvestment, the U.S. would lose $3.9 trillion off its economy by 2025 from higher travel times, unreliable utilities, higher manufacturing and distribution costs.

The committee is preparing to push for a comprehensive funding package this year.

President Donald Trump asked Congress Tuesday for an infrastructure plan during his State of the Union address.