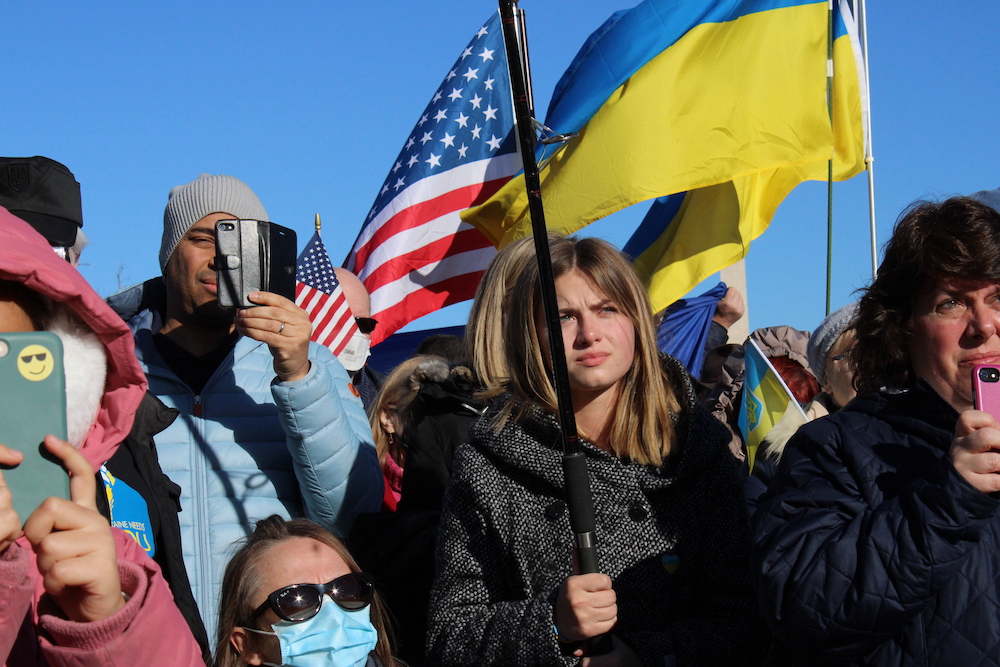 It was about 5 a.m. on a Thursday when the blaring sound of a ringing phone shook Iryna Verona awake.

One glance at the screen and she knew she had to prepare herself for the worst. She lifted herself from the bed, and sat on the edge, her feet touching the cold floor.

Easing herself, she took a deep breath, and answered the phone.

“We’re watching CNN. Putin did it. He’s dropped the bombs; he’s invading Ukraine,” her Ukrainian American friends told her on the other end of the line.

With those words, the status quo officially changed, and Iryna knew she had little time.

Though she’d hoped she wouldn’t need them, her bags had already been packed, “just in case.” She grabbed her passport and travel documents, calling her friends and family in Kyiv to warn them, urging them to pack their bags and be prepared to leave. She ran to the room opposite hers and woke her baby sister and her husband.

They’d been living together, along with their mother, in Rohatyn, in western Ukraine, and had slowly been preparing for the day they’d have to leave. Ever since Russian President Vladimir Putin began to deploy troops along the border, they’d known it was only a matter of time.

“We’d been expecting it the day before,” Iryna said. “I was working in the evening, and I was answering emails, and at some point, I got so scared that I closed the computer, and I started to go and pack my documents because I didn’t know what to do. I started to gather my most important things and put them in a box.”

At 6 a.m., her sister, Halyna, and her husband were fully packed with bags in the car. Iryna had been helping her mother pack and find her documents.

After a trip to the supermarket and gas station, the family began the long trek to the Polish border.

“We reached the border, and the line was about 3.5 kilometers long when we got there,” Halyna said. “People were standing there for days, just waiting. Women carrying babies, there were so many babies.”

They arrived at 4 p.m. and waited for hours.

Finally, at 2 a.m., they were able to make their way into Poland, where they’ve been since — now living with extended family.

But with the war still raging, the sisters are left to wonder how long they’ll be able to stay and whether they’ll have a country to return to once it’s over.

Worried about where they’ll be able to settle if Ukraine falls, both Iryna and Halyna are looking to the U.S., and the connections they have there to attempt to find a new home for their mother, husband and child.

Both have a history with the U.S. Iryna was a Fullbright scholar, earning her masters in law from the University of Miami. Halyna was a foreign exchange student who lived with a family in Ohio for more than a year.

Not just that, both have long-standing friends and family in the United States.

“Obviously, what we want is to be able to go back home to Ukraine,” Halyna said. “But I have a child, and I don’t want him to grow up in a country plagued with an unnecessary war.”

“The friends who warned us about the invasion have been our lifeline,” Iryna said. “There is a strong Ukrainian American community waiting for us, and we’d like to be able to go to them if we cannot go back home.”

Had they been in the U.S., Iryna and Halyna would have qualified for Temporary Protected Status, which the Biden administration recently granted to Ukraine. This would have allowed them to reside in the U.S., without a visa or fear of deportation, so long as the designation is active.

Though an estimated 75,100 Ukrainians were beneficiaries of the designation, the lives of millions of others have been upended as a result of the invasion, and though many have managed to find refuge in neighboring countries, some — particularly those with family in the U.S. — have been looking to travel abroad as a way to escape the atrocities of war.

Feeling helpless, Ukrainian American families have been trying to aid their relatives abroad by looking for ways to provide safe passage and provide to those who no longer can call Ukraine their home.

As a child in 1992, Gleb Roytman, along with his father, mother and sister, were forced to leave their then-home in Soviet Russia. His parents, both Jewish, were potential targets of religious persecution, so his uncle, then living in the U.S., filed a family preference visa to get them out of the country.

Though the turbulent winds of Hurricane Andrew blew the roof off of Roytman’s first house in Florida, his family was able to take root in the country they’ve now made their home.

Decades later, in an eerie parallel, his uncle on his mother’s side found himself stuck in Kyiv as Russia dropped the first bombs.

Now in Poland, Rotyman’s uncle, George Nikipielov, is trying to get his sister, Helena Batalova, her daughter, Anna Batalova and her five children out of the country and into the U.S. He’s trying to move them to Florida with Rotyman, while he stays behind to fight for Ukraine.

“Right now, the priority for me is to try to get the children and the women out,” Roytman said. “We’re drastically unprepared for any kind of refugee crisis, and nobody has an answer. Nobody has a way to help.”

These aren’t the only cases; Nadiya Atamas-Wezain in Boca Raton has a mother and brother still in Ukraine and has been trying to find a way to get them out of the country and move them into the United States with her.

In Illinois, John Jaresko, president of the board of St. Andrew Ukrainian Orthodox Church, says he’s seen many Ukrainian Americans, in Illinois and out of state, who’ve expressed these very concerns.

The Path For Refugees

Ukrainians currently need a visa to enter legally, and the pathways to getting them are limited and can take up to years for them to be processed.

After suspending visa processing in Ukraine, the Department of State designated the U.S. consulate in Frankfurt, Germany, as the processing hub for Ukrainian immigrant visa applications — according to Danilo Zak, policy and advocacy manager at the National Immigration Forum, those with direct family in the U.S. should apply for a visa there.

Those with direct family in the U.S. can apply for family-based migration visas, and two types are offered — “immediate relative” visas and “family preference” visas.

“The pipeline has really been decimated by COVID-19. It has been this long process of slowly rebuilding this refugee settlement infrastructure,” he said. “Even for people with so-called ‘direct access’ to the refugee resettlement system, it can take over two years to process a refugee, and we’re just not able to respond in an agile manner to refugees fleeing Ukraine, even those with direct ties to the U.S. like family members.”

Ukrainian-American families can file on behalf of their relatives and contact the United States Citizenship and Immigration Services to help flag their particular applications, “this may be a way to get the process expedited, Zak said.”

“If there are families with compelling stories in the U.S. and want to welcome their family members who have fled Ukraine, another way would be to reach out to their members of Congress,” he said. “Push them and the administration to create a better process for this, but also use them to flag their specific concerns and cases with particular people and see if those can get expedited using Congressional authority.”