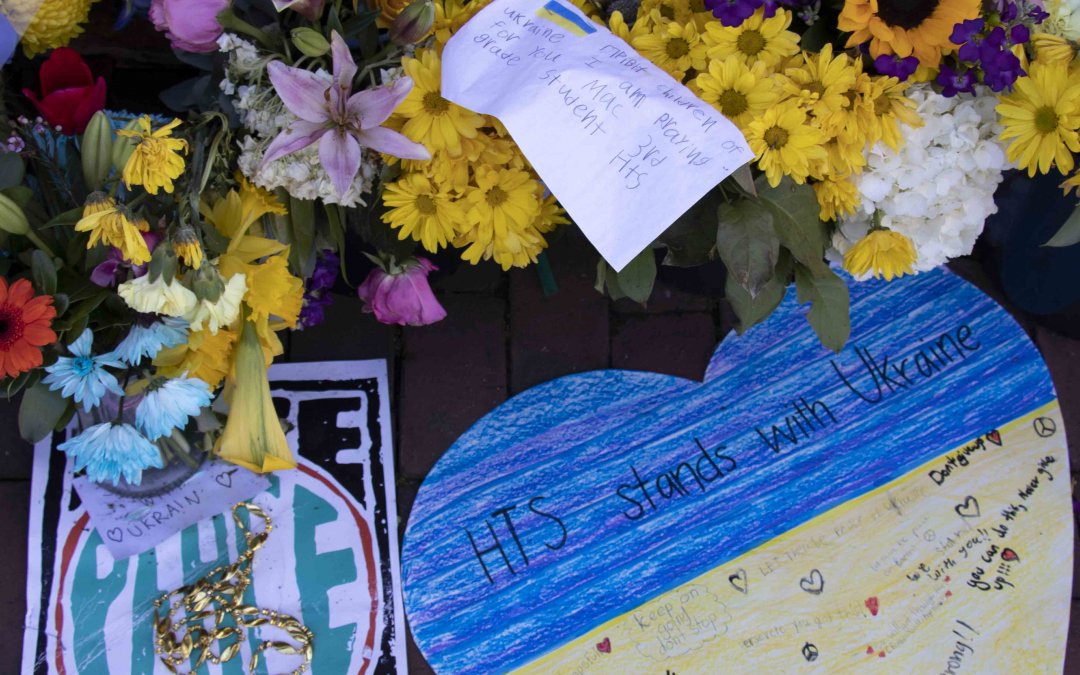 Sunflowers and signs in support of Ukraine dot the sidewalk outside of the Ukrainian Embassy in Georgetown on Friday. (Charlotte Varnes/MNS)

WASHINGTON – “One cannot wage war,” Gen. Douglas MacArthur once said, “without the support of public opinion.” What happens, though, when the public seems readier for war than the U.S. government?

Cygnal Polling & Analytics, a national polling firm that works with center-right GOP candidates and committees, in conjunction with Ukraine-based Gradus Research and Response: AI polled over 3,500 citizens of Ukraine, the United Kingdom, the United States and various European Union countries. Among other data, including favorability ratings of world leaders from Volodymyr Zelenskyy to Xi Jinping, Cygnal found that a plurality of American respondents support establishing and enforcing a no-fly zone over Ukraine, as well as the U.S. intervening militarily to thwart the Russian invasion at clips of 45%-24.9% and 39%-34.2%, respectively.

Though perhaps needless to say, this sort of posture is a significant departure from statements made by U.S. lawmakers who overwhelmingly oppose such direct action to defend Ukraine.

Sen. Ted Cruz (R-Texas) told Medill News Service before the poll’s publication that establishing a no-fly zone over Ukraine would be “a serious mistake.”

“A no-fly zone would significantly increase the chances of direct military conflict between American servicemen and women and Russian soldiers,” Cruz said last week. “That would be foolhardy.”

Sen. Josh Hawley (R-Mo.) demurred when asked about his thoughts on such a step, saying, “I suppose that would usually involve us shooting down — if we’re going to enforce it — shooting down Russian planes, etc. This would be an act of war … seems like a fast track to war with Russia.”

Hawley would not clarify to MNS whether he supports or opposes establishing and enforcing a no-fly zone.

If U.S. lawmakers are not yet at the point of calling for more direct American intervention to halt the Russian invasion, experts believe that the will of the people may soon push them in that direction.

“We have done no-fly zones to save people’s lives,” said former U.S. Ambassador to Georgia and State Department spokesman Ian Kelly. “We did it in Bosnia, we did it in Libya and we did it in Iraq, so I’m not surprised that Americans would be in favor of trying to protect [Ukraine] for humanitarian reasons.”

On the question of what exactly might compel the U.S. government to action, Kelly pointed to a phenomenon known as the CNN effect.

“[Bill] Clinton was really reluctant to get involved in Bosnia,” Kelly told MNS, “and there happened to have been a video camera in the main square of Sarajevo where a mortar shell landed on market day. There were all these terrible images of all these people on the ground who had been killed. There was a direct correlation between that incident and Clinton saying, ‘OK, we got it. We’ve got to use our air power to take out these artillery sites around Sarajevo.”

In Kelly’s view, the continued deluge of images and video documenting Russian atrocities in Ukraine will only bolster the American public’s desire to take more drastic action.

As for whether public opinion on foreign policy should be given a significant amount of weight, Scheinmann said, “the reality is that what the public is responding to can already be outdated information, and the public is also being asked broad questions as opposed to minute ones that go into a lot of complexity.”

The question, said Scheinmann, is not whether the U.S. government should give credence to public opinion during a crisis, but absent one.

“The public’s seeming support for withdrawal [from Afghanistan] was actually a lot softer and not as solid as we thought,” he said, “and similarly here in Ukraine, the public’s previous support for a hands-off American approach was, again, a lot softer when push came to shove.”

Though public opinion on increased U.S. involvement to stymie the invasion has shifted, American elected officials — with the notable exceptions of Rep. Adam Kinzinger (R-Ill.) and Sens. Rick Scott (R-Fla.) and Roger Wicker (R-Miss.) — have held fast in their opposition.

President Joe Biden has consistently shut down any notions of establishing a NFZ or sending American troops to defend the besieged nation and has bipartisan support on the issue.

“I don’t support a move like that,” Sen. Todd Young (R-Ind.) told MNS when asked whether shifting public opinion might change his mind.

Sen. John Barrasso (R-Wyo.) concurred, saying, “Russia has been escalating every day, but I still think it’s not in the best interest of the United States or the world to put planes in the air over Ukraine to go into head-to-head combat with Russia.”

From the other side of the aisle, Sen. Debbie Stabenow (D-Mich.) told MNS, “I support everything possible for the Ukrainians. They’re incredibly brave. We don’t help them by doing anything that starts World War III, but I’m going to support them in every way that I can.”

Even Sen. Lindsey Graham (R-S.C.), who earlier in March ruffled feathers with a tweet calling on the Russian people to assassinate Vladimir Putin, said he is not quite at the point of supporting direct American military intervention.

Asked about what might trigger him to support such drastic measures, Graham said to MNS, “If they keep committing war crimes on a mass scale. But right now, let’s help the Ukrainians. They seem to be doing a hell of a job. Not giving them the fighter jets is just unconscionable; I don’t get that. But no no-fly zone yet.”

“On foreign policy issues in particular, [perspective] flows a little bit more from elite thought leadership and national security leadership toward public opinion,” said Ronald Reagan Institute Policy Director Rachel Hoff. “For example, on Iraq and Afghanistan, you saw the partisan split on public opinion shift very significantly from before the Trump administration to later in the Trump administration, where the president himself was quite vocal on ending the wars … then we saw Republican public opinion shift as a result.”

Hoff told MNS that though lawmakers are not necessarily beholden to the American public’s opinion on foreign policy issues, there is a significant benefit to understanding where the general public stands.

“It’s valuable to know where the views of the broad bipartisan national security consensus aligns with the American people — like around the rising threat of China — or where it doesn’t align, and that’s where thought leaders and policymakers might have some work to do.”

“About 25% of Americans list the Ukraine crisis as the top issue facing [the United States] right now,” Kenna said. “There isn’t necessarily a direct link between something in Eastern Europe and the United States in an obvious way, and yet Americans have a nuanced view and understand that it’s all interrelated.”

Though it is far from predetermined, these numbers may foretell a recalculation in the Oval Office.

“The president’s proclivities are still to try and keep this limited and not to have the United States engaged in it,” Scheinmann said. “The question is: Will [Biden] read the polling as saying, ‘the American people are with me and my instincts are right,’ or will he say, ‘the American people are not with me, and I’ve got to figure out a way to achieve what I want to achieve without it being a losing issue for me?’”

Internal pressure is not the only way to affect policy change.

Earlier in March, Ukrainian president Volodymyr Zelenskyy addressed the United States Congress and — alongside an eminently powerful video documenting Russian atrocities in his country — pressed the U.S. to establish a no-fly zone.

The Cygnal poll shows that Americans have a more favorable view of Zelenskyy than they do their own president, and with American sympathies lying with the Ukrainian president, a growing consensus of Americans wish their country to heed Zelenskyy’s call to defend not just Ukraine but the West itself.