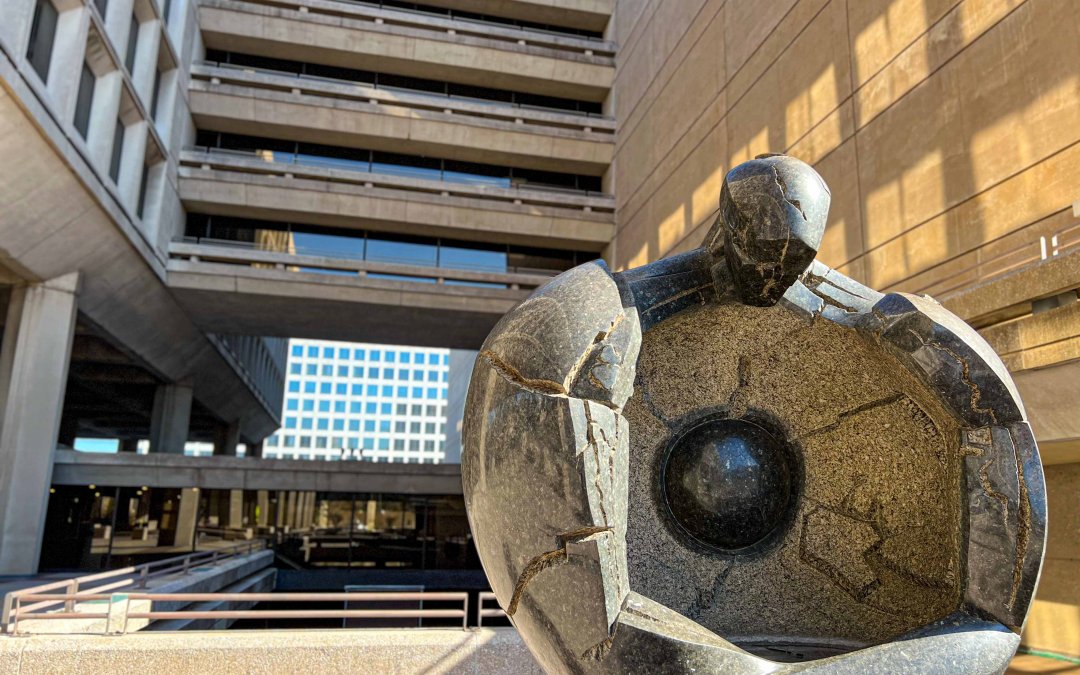 Humankind harnesses the atom – a statue outside the U.S. Department of Energy headquarters. (Zack Miller/MNS)

The push is a boon to large petrochemical companies, who have renewed calls to open new oil wells on federal land.

The hearing comes two weeks into Russia’s invasion of Ukraine, which has disrupted energy markets and resulted in a web of sanctions against Russian companies. Sen. Joe Manchin, D-West Va., said the United States should seize the moment and ramp up oil and gas production.

“It is time for us to disarm [Vladimir] Putin, and other countries who have the ability to wield energy as a weapon,” Manchin said. The committee chair urged the U.S. government to drop restrictions on, and support investment in, domestic energy production, energy infrastructure and supply chain security.

“Stop pointing fingers, take action and just get it done,” said Manchin, who has received more donations from the oil and gas industry this election cycle than any other senator and owns a coal company.

Manchin stressed the need to fund the Mountain Valley Pipeline project, a 300-mile natural gas pipeline that crosses through West Virginia, his home state. He also called the shift from gasoline cars to electric vehicles a “major mistake,” making us reliable on foreign minerals.

“We’ve all heard about the atrocities that Putin’s troops are committing. [How] do you think this barbarism has been paid for? It’s been paid for by Russian energy,” Barrasso said, adding that energy is the single largest source of revenue to the Russian state.

President Joe Biden on Tuesday announced a ban on imports of oil, gas and coal from Russia in response to the nation’s war against Ukraine. The announcement only affects U.S. companies and stops short of sanctions, which would have also prevented international trading partners from buying Russian petroleum.

Before the ban, 7.9% of U.S. oil and petroleum imports – about 672,000 barrels each day – came from Russian suppliers, according to government figures.

But oil and gas are not necessarily all that the United States should count on in future years.

“The U.S. oil and gas industry is strong. It leads the world in production, and growth is continuing. It would be a mistake, nonetheless, to view oil and gas as a silver bullet for energy security,” Jonathan Elkind, a senior researcher at Columbia University, told the committee.

“We benefit from having diversified energy systems, and we should celebrate the dramatic growth of wind and solar power,” Elkind said.

Shell recently apologized for buying a tanker of oil from Russia after the war had started, and is facing a $400 million write-down on Russian assets it no longer can use because of sanctions.

“On top of that, the oil and gas industry already receives an estimated $3.1 billion in taxpayer subsidies each year.”

Cortez Masto said that “in recent days, major oil companies in the United States have said that they would rather use their earnings from higher prices to boost payouts to shareholders and expand operations slowly rather than rush to drill new or existing wells.”

“The prices are something that we do not control,” Hirstius told Cortez Masto. Hirstius did not deny that dividends are important, but said Shell is “committed to invest and ensure that our production does not decline.”