Experts: Russia Could Invade Ukraine Within ‘Next Few Weeks’ 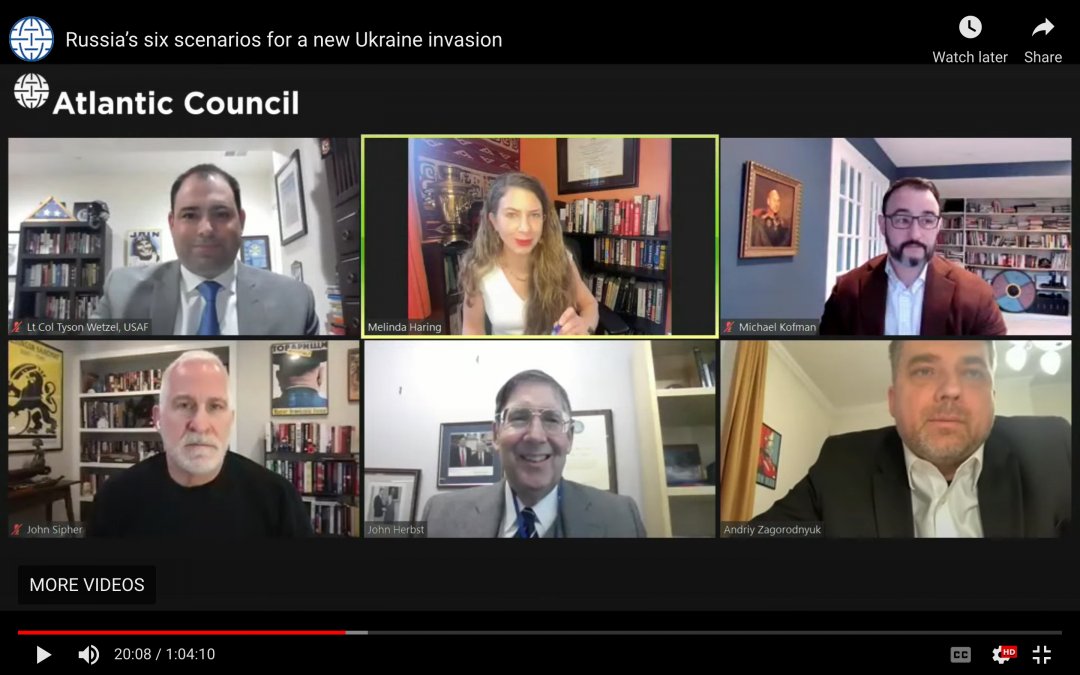 WASHINGTON – Russia could be ready to invade Ukraine within the next month, several experts agreed during a virtual panel hosted by the Atlantic Council.

One scenario could see an invasion begin via a “very large” cyber attack, according to Lt. Col. Tyson K. Wetzel, a senior Air Force fellow at the Atlantic Council.

“​​Probably on critical infrastructure. Try to turn the heat off. Try to turn communications off,” Wetzel said. “Create a crisis within Ukraine that potentially threatens legitimacy.”

Russia only needs about four weeks to put together a force to successfully invade Ukraine, according to Michael Kofman, research program director in the Russia Studies Program at the Center for New American Security.

The panel, made up of academics, military personnel and a former U.S. ambassador to Ukraine agreed an invasion is likely if more severe forms of Russian deterrence are not implemented.

Vladimir Putin, the president of Russia, “is a gambler,” Wetzel said. “I think he is willing to push the chips in at the risk of large losses.”

U.S. officials have sounded the alarm for an impending Russian invasion for months. Now, an estimated 100,000 Russian troops have amassed at Ukraine’s border, according to Secretary of State Antony Blinken.

Despite Russian forces surrounding three sides of Ukraine, Russia is not currently in a position to take the capital, Kyiv, Wetzel said. Moscow will likely want to “take and hold small areas for a political objective.”

“It really comes down to what are Putin’s objectives?” Wetzel said. “I think his objective is to take territory and to make NATO look feckless.”

The U.S. is also at fault, according to John Sipher, former member of the CIA’s Senior Intelligence Service and nonresident senior fellow at the Atlantic Council’s Eurasia Center.

“This crisis is partially the result of mishandling of previous crises,” Sipher said. “We’ve consistently shown weakness in the form of accommodation. We’ve been fighting the wrong war, if you will.”

“The hybrid component is what Russia does,” Wetzel explained.

Some panelists reflected cautious optimism that Russia could be deterred from invading Ukraine if the White House takes a stronger stance.

If President Biden’s warnings are “taken seriously by the Kremlin, the odds of invasion go way down,” said John Herbst, who served as U.S. Ambassador to Ukraine from 2003 to 2006 under former President George W. Bush.

Any Russian troop movement over the border of Ukraine will constitute an invasion, Biden said Thursday.

“Let there be no doubt at all,” Biden said. “If Putin makes this choice, Russia will pay a heavy price.”

The Department of Defense on Monday put 8,500 U.S.-based troops on heightened alert for potential deployment to the region. Additionally, NATO sent ships and fighter jets to help reinforce eastern Europe.

But there’s still work to do to make deterrence a credible threat, according to some of the panelists.

“We have to make it appear that the costs are prohibitive,” Wetzel said, “and I don’t think we’re there at this point.”

Harsher sanctions are a potential solution, some panelists said.

“If we push the Europeans hard, we don’t simply consult, but we push in the right direction on serious sanctions,” Herbst said, “this could lead to no invasion.”

Blinken pushed back against criticism of the administration’s sanctions response, arguing that  waiting now will give the U.S. more leverage later.

Regardless of the international community’s response, Ukraine is preparing for the worst, Zagorodnyuk said.

“Ukranians are ready to fight,” he said.