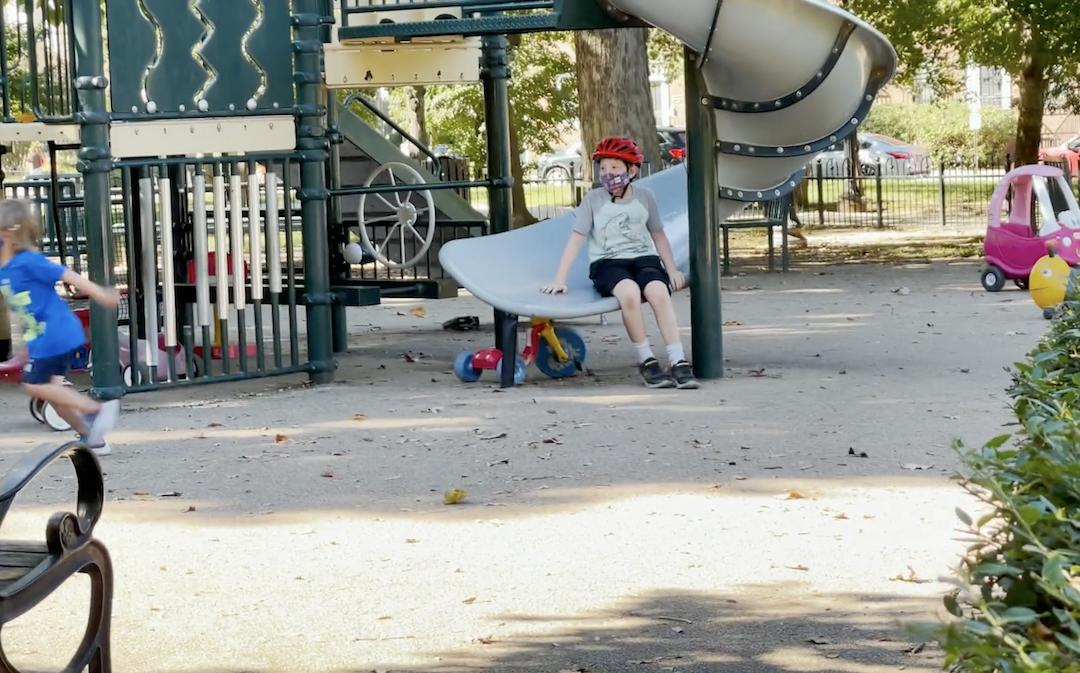 Children play at a playground near Capitol Hill. (MIKAYLA DENAULT/MNS)

WASHINGTON — The Biden administration is pushing to fund universal preschool nationwide in the Build Back Better bill, but the program’s success will hinge on whether states agree to implement it.

Advocates say the program, touted as universal pre-K because it requires that families pay nothing out of pocket, could substantially improve the quality and availability of preschool for 3 and 4-year-olds. But a combination of potentially high costs to states, inadequate pre-K infrastructure and pushback from some religious groups means the legislation could fall short of its intended effect.

As written in the House-passed social spending package, the six-year program would provide grants to states that submit a plan outlining how they will comply with the program’s requirements like enrolling marginalized students in newly created seats and raising teacher salaries to the level of their elementary counterparts.

The program allocates $18 billion to states over the first three years, but experts say that is unlikely to cover all the costs that states would incur if they participated. It then provides reimbursements based on a percentage of state preschool service costs – 95% in year four, 80% in year five and 64% in year six.

“I think some (states) will look at it because they’ve got an architecture in their state that this might work with,” said Sen. Richard Burr, R-N.C. “But I think when they look at the cost share that ultimately they will be responsible for, I think there are few legislatures, whether Democrat or Republican, that are going to go out and do it.”

One of the main concerns for state legislatures, according to Burr and experts from both parties, is that the federal cost-sharing sunsets after six years, leaving states to choose between scaling back preschool options or paying entirely out of pocket to maintain capacity.

“Nobody’s responsible after [federal funds] cut off, but you’re going to have a hard time getting the governor to eliminate the program,” Burr said.

Multiple experts say Democrats are betting that future Congresses will extend the federal cost-sharing. To get enough votes to pass Build Back Better in the House, the party scrapped the original version of the program, which covered 100 percent of state costs during the first three years and continued the program for a seventh year.

“That’s always going to help because Republican governors, they don’t want to raise taxes,” Bruenig said. “That’s the easiest thing you can do, although it does cost money on the budget.”

State legislatures may have concerns other than cost. Frederick Hess, director of education policy studies for the conservative American Enterprise Institute, said the provisions would do long-term harm to faith-based child care providers and quickly increase the cost of preschool through the mandatory increase in teacher salaries.

“When you’re trying to write rules that are going to speak to millions of children across 50 states, you wind up tending to write relatively blunt rules, and that makes it all too possible to deliver unintended, negative consequences,” Hess said.

The possibility of leaving out faith-based providers stems from nondiscrimination clauses attached to the federal dollars, which would prohibit schools from accepting only children of one religion.

A statement from the Education and Labor Committee’s top Republican, Rep. Virginia Foxx of North Carolina, criticized the law for “adding significant burdens on state and local governments and pushing out private and faith-based providers.”

Another hurdle to the success of the program’s implementation is scale. Even in states that do choose to participate, meeting the requirements of universal, high-quality preschool will take time.

Although 44 states and the District of Columbia have pre-K programs, only 6% of 3-year-olds and 34% of 4-year-olds were enrolled during the last academic year, according to the First Five Years Fund, an early child care and education federal advocacy group.

The National Institute of Early Education Research estimates that only four states — Oklahoma, West Virginia, North Carolina and New Jersey — and D.C. “currently fund their programs at a level that could support a full-day, high-quality program paying teacher salaries comparable to K–12.”

Steve Barnett, head of the National Institute of Early Education Research (NIEER), estimated that at the current pace, “we would not have universal pre-K for 3 and 4-year-olds before the next century.”

The funding for universal pre-K and other provisions in the Build Back Better bill will likely change before it is voted on in the Senate, experts said. This reality is why state spokespeople from Georgia and Oklahoma said they could not yet say whether they plan to participate in the program.

A spokeswoman for the West Virginia Department of Education said the state “would likely participate” in the federal program, especially to increase capacity for its 3-year-olds. Only 6% of children that age attend state preschool, compared to 68% of 4-year-olds, according to 2020 data from NIEER.

Although many experts brought up partisan disagreements between state and federal lawmakers over issues such as the 2010 Medicaid expansion or the coronavirus federal unemployment benefits, advocates pointed to the bipartisan nature of state preschool programs as a hopeful sign.

“I think it will be less partisan, but I think there’s still some ideological component to it,” Barnett said.