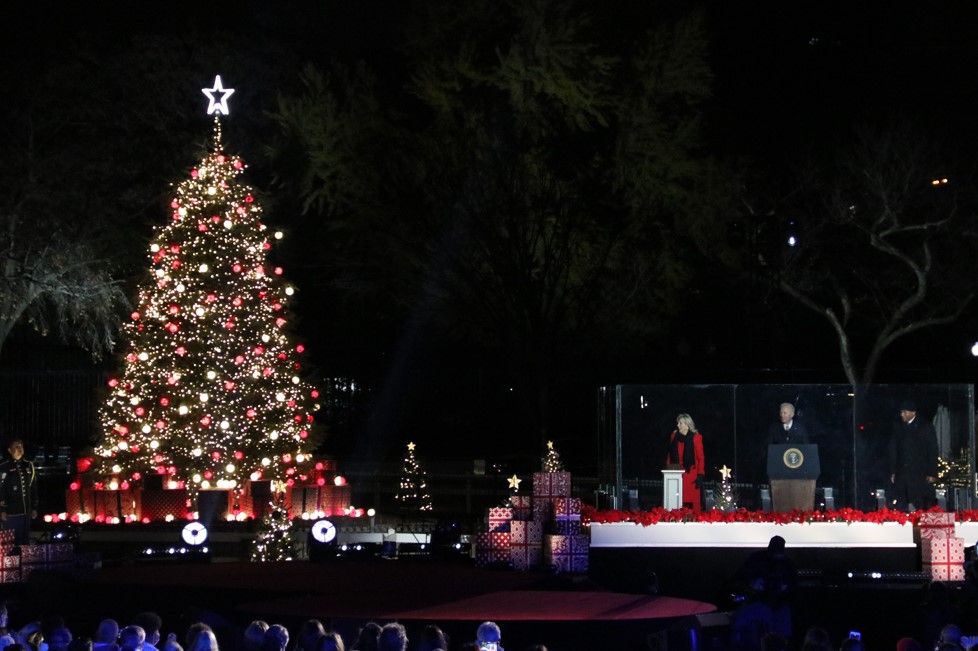 WASHINGTON — Christmas season is officially in full swing in the nation’s capital as the 99th annual National Christmas tree lighting ceremony drew crowds on Thursday evening. Marylanders got in on the festive celebration both in person and from afar.

During his address, he took time to remember those lost during the COVID-19 pandemic, while also keeping an optimistic and hopeful tone about the future of the country.

“Over the course of the past 99 years, presidents have continued this tradition of lighting the National Christmas Tree through war and peace, struggle and progress,” Biden said. “For the evergreen tree reminds us that even in the coldest darkest days of winter that life and abundance will return.”

The tradition began in 1923 with President Calvin Coolidge, who lit up a 48-foot balsam fir.

This year’s National Christmas Tree is a 27-foot white fir from Middleburg, Pennsylvania that was planted on the Ellipse just south of the White House in October. It is decorated with large red and white bulbs on a background of smaller warm white lights. It’s topped with a shining star.

“Thanks to the National Park Service and the Foundation that takes such great care of our National Parks and the 1,300 students across the country who created the ornaments that decorate the trees representing our states and our territories,” Biden said.

The tree is surrounded by the Pathway of Peace that is lined up 56 smaller Christmas trees decorated by students from each U.S. state and territory.

Maryland’s tree on the Pathway of Peace was decorated by 16 students at Manchester Valley High School in Carroll County. Karen Trageser, who has taught in Carroll County Schools for 23 years, said she was happy to take on the project when asked by her supervisor. This isn’t Trageser’s first time helping government officials spread Christmas cheer as she created ornaments for the governor’s mansion in Annapolis many years ago.

Trageser said her students were more than enthusiastic to participate. To create the designs, she said they researched “all of the quirky little things that represent [Maryland]” for inspiration.

Each ornament presented a different piece of Maryland. One ornament featured a detailed rendition of the train called the “Thatcher Perkins” that is on display in the B&O Railroad Museum located in Baltimore. Another included visuals of crabs and hammers.

Others depicted official Maryland state symbols like jousting, the state sport, the Calico cat, the state cat, and the Black-eyed Susan, the state flower.

Students designed their ornaments on a paper template with vibrant colors. Trageser said the designs were then sent to the national ornament representative, who translated the design on to acrylic ornaments.

Trageser said the chance to create the ornaments was exciting for many students, especially after many opportunities were unavailable or canceled due to the pandemic.

“They were honored, especially after the last year. They were excited to do something that was a little more interesting, something more fun and [to represent] the state,” she said.

Maryland residents can see the trees and student-created ornaments until Jan. 1, 2022. It is lit from dusk until around 11 p.m. every night.