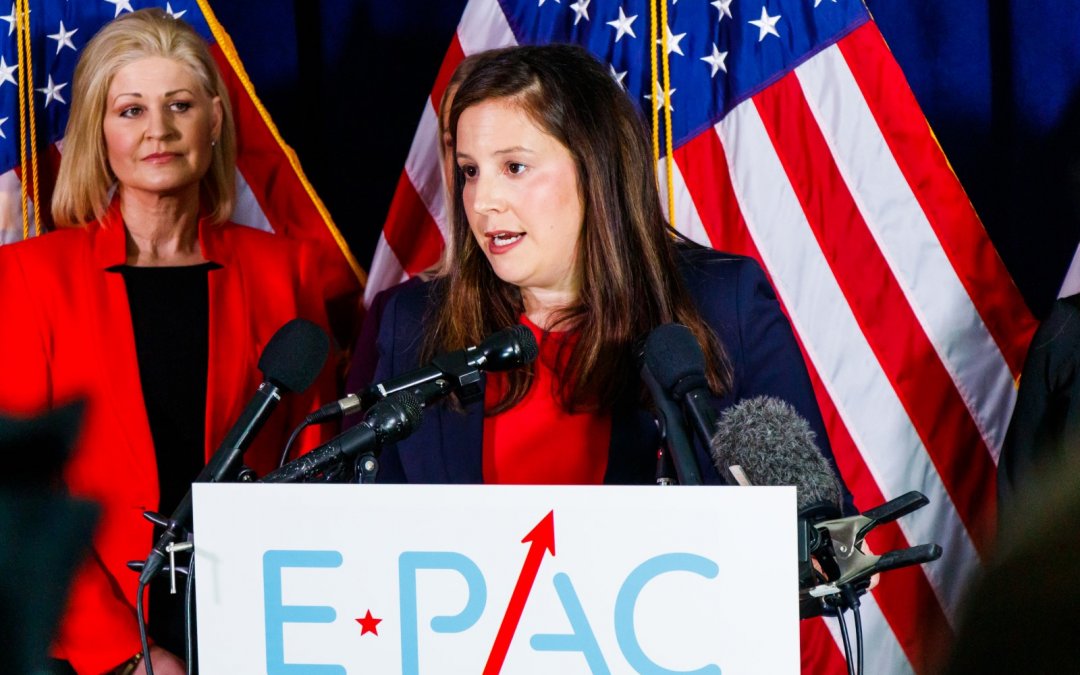 WASHINGTON — With her sights set on next year’s midterms, Rep. Elise Stefanik unveiled her PAC’s first round of endorsements for female GOP congressional candidates this afternoon in hopes of replicating the record-breaking surge of Republican women elected to Congress in 2020.

At a news conference in the Republican National Committee headquarters, Stefanik outlined Elevate PAC’s 2022 congressional strategy and introduced each of the eight endorsed candidates. Although still months away from the primaries, the candidates have raised a combined $4.75 million as of Oct. 15, the deadline for the most recent campaign finance filing period.

The number of GOP women in the House doubled last year and now stands at 31; more than half of those received endorsements from Stefanik’s E-PAC. The political action committee has raised more than $3 million to elect female GOP candidates since its creation after the 2018 midterms, when a wave of female Democratic candidates won 89 seats in the House.

“We were down to only 13 Republican women in the House [after 2018] and at that point, I realized we had a problem,” Stefanik said. “We were not reflective of America.”

Stefanik, who was elected Republican Conference chair by House Republicans earlier this year, has significant influence within the party for her role in chipping away at the Democrats’ House majority last year. Of the 15 candidates that flipped seats in the House to the GOP in 2020, 11 were women endorsed by E-PAC.

Learning from November’s local elections in New York and Virginia, in which GOP candidates made significant inroads in the suburbs, Republicans plan to leverage issues like inflation and crime to lure voters who are dissatisfied with the Democratic party’s performance in those areas, said Stefanik.

Jeanine Lawson, candidate for Virginia’s 10th Congressional District, said Republican Glenn Youngkin’s successful bid for Virginia governor “proves that even liberal northern Virginia is fed up with a woke school curriculum, fed up with the nonsense of ‘soft on crime’ and fed up with higher taxes.” Lawson is a member of the Prince William County Board of Supervisors.

Although each candidate described distinct platforms that reflect the relevant issues of their districts—which range from Pennsylvania’s eastern suburbs to the southern border of Texas—a point of unanimity for their campaigns was frequently underlined: a hunger to oust House Speaker Nancy Pelosi from the the top leadership post.

“When Nancy Pelosi took over her reign here in Washington, I saw the effects that the Democrats were having on my family firsthand in a very short amount of time,” said Karoline Leavitt, candidate for New Hampshire’s 1st Congressional District and former White House assistant press secretary in the Trump administration. “I am running to unseat Democrat Chris Pappas and retire Nancy Pelosi.”

E-PAC’s first slate of endorsements for 2022 originally included another candidate, Susan Wright, but she lost a special election this summer to represent Texas’ 6th Congressional District.

More than 200 Republican women have filed to run for Congress in 2022, Stefanik said, and the PAC plans to announce additional endorsements in the coming months.