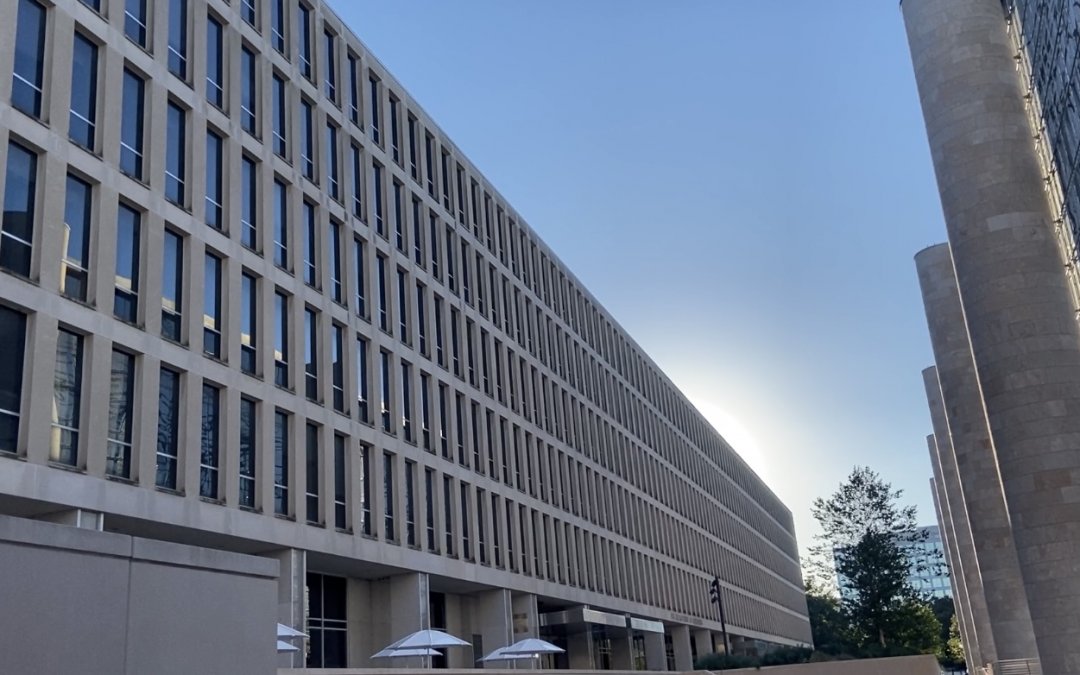 The U.S. Department of Education reflects the sun’s rays, as Deputy Secretary of Education Cindy Marten and Under Secretary James Kvaal testify in front of House Education and Labor subcommittees on Wednesday. (Mikayla Denault/MNS)

WASHINGTON — From lack of technology and internet access to teacher shortages to outdated buildings or classrooms, the COVID-19 pandemic exposed and exacerbated longstanding problems of students and schools across the country.

To address these continuing issues, the federal government passed three pandemic relief bills that have invested an unprecedented amount of money into American educational institutions over the last two years.

In 2020, Congress passed the Coronavirus Aid, Relief, and Economic Security Act and a supplement to it totaling $70 billion in emergency relief aid. In March, the American Rescue Plan was passed with a more intense focus on getting aid to schools by providing about $122 billion for state education agencies and school districts. The CARES funding expires in September 2022, while the ARP money must be spent by September 2024.

“This funding is a major reason why school districts around the country can reopen safely, stay open safely and offer students additional resources to catch up when needed,” Northern Marianas Islands Delegate Gregorio Kilili Camacho Sablan, the chair of the House Early Childhood, Elementary, and Secondary Education Subcommittee, said at a joint Education and Labor subcommittees hearing last week.

Sablan said it’s important that the Education Department provides accountability in how the funds are disbursed, the agency has a solid track record of oversight of the money it provides to state and local education.

But some Republican members of the subcommittee expressed skepticism about the amount of money being spent, the department’s ability to provide effective oversight and whether the funds are being used for the expressed purpose.

“We have a duty to our taxpayers to show their money is being used as efficiently and effectively as possible. However, I’m concerned that Democrats created no pathway for us to keep track on how the money they have this system spending is being spent,” Rep. Burgess Owens of Utah, the highest ranking Republican on the subcommittee, said.

The $122 billion in the American Rescue Plan is intended to address three specific areas: the physical health of students, their social, emotional, mental health needs and their learning loss.

During the hearing, Deputy Education Secretary Cindy Marten told the House members that the department is reviewing state plans for the funds as mandated by the law. As of November, 46 plans have been approved. She also said other resources like the online Education Stabilization Fund transparency portal run by the education department are used to monitor spending.

New York is one of the 46 states with approved plans with a total allocation of $8.9 billion.

With approval from the federal government, the New York State Education Department said it is reviewing local school districts’ plans, which were due in September. These plans give detailed information about how funds will be used within individual school districts.

Marina Marcou-O’Malley, policy director of the Alliance for Quality Education, an Albany-based organization dedicated to ensuring high quality public education across the state, said the funds are essential to address gaps in public education that became worse because of the pandemic.

For example, she said, some schools in the Capital Region are using the funds to rehire staff, specifically social workers or psychologists, who were cut during the pandemic.

“In the Albany area, we are doing a good job. We’re investing in the right places, and [doing] a good job of seeing where the gaps are,” Marcou-O’Malley, who’s also a parent of two students in the Albany district, said. “There’s definitely room for improvement.”

The City School District of Albany, which is receiving approximately $33 million, plans to use ARP ESSER funds to support many initiatives including ventilation system enhancements, a restoration of music staff to 2019 levels, the purchase of additional digital tools and enhancement of summer school.

However, Marcou-O’Malley said there are some concerns of a potential “funding cliff” that districts may be headed towards once relief funding ends in 2024.

“You can be doing the right thing and a really good thing for three or four years and then you won’t have money, the [money] gets taken away and you’re back to square one,” she said.

According to state Education Department officials, the agency has stressed to localities the temporary nature of the funds, encouraging them to use the funds for short-term expenses or to ensure another funding source is available to pick up the costs once federal funds are no longer available.