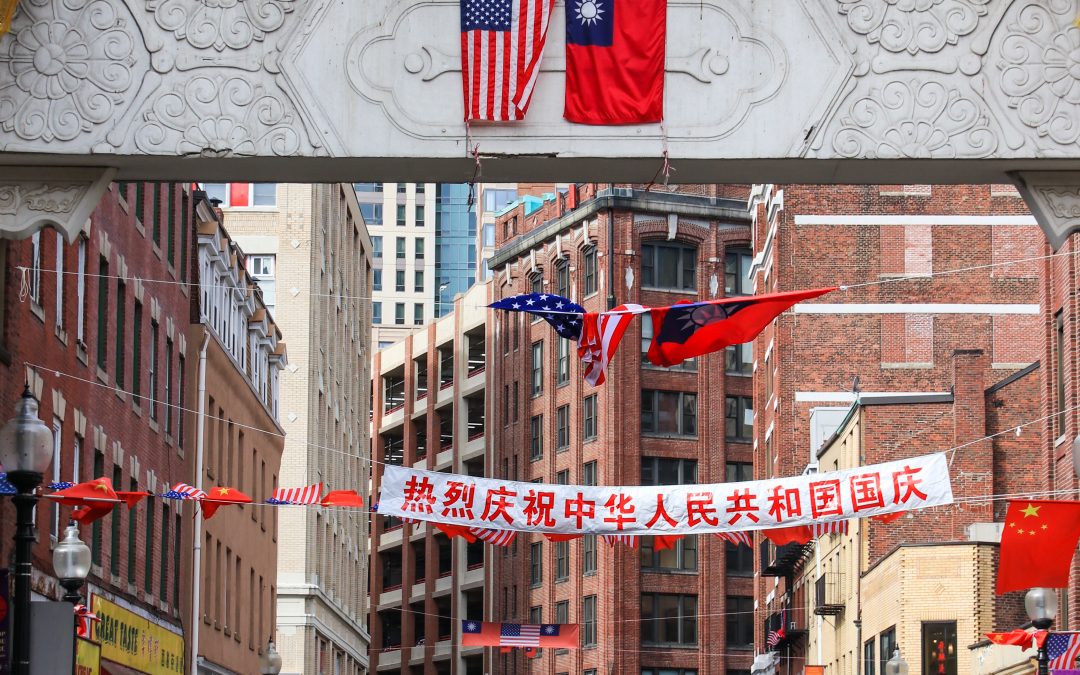 The Taiwanese and American flags fly next to each other in Boston's Chinatown. However, Chinese flags & a banner celebrate China's national day. (Linus Hoeller/MNS)

WASHINGTON – Amid rising tensions and unprecedented levels of Chinese incursions into Taiwan’s airspace, the island’s independence could be at stake if Taipei and Washington are not able to find a security strategy that stretches beyond military support to include more robust economic ties, Brookings Institution experts said talk Tuesday.

Shirley Lin, a nonresident Brookings fellow and Taiwan expert at the University of Virginia, said that the disconnect between U.S. economic and security policies toward Taiwan is dangerous to Taiwan’s continued political independence from China. If the policies are not adjusted, the U.S. would eventually be in a position where it “is not really able to help Taiwan … in the long term – while China can.”

China has become Taiwan’s largest trade partner, receiving over a quarter of its exports and providing more than 20% of the island’s imports. The U.S. lost its position as Taipei’s main economic partner in the early 2000s and now accounts for less than 15% of the island’s trade. “China is going to become the much more convenient trading partner,” Lin said. “If Taiwan doesn’t integrate with the West … it will, in the long term, become a part of China.”

To avoid that outcome, Lin said, Washington lawmakers must realize that Taiwan’s security is not at all separate from the economic relations between the U.S. and Taiwan. The Biden administration should create more bilateral economic agreements, which would encourage other countries to do the same, she said.

Shelley Rigger of Davidson College said domestic politics in the U.S. pose a risk for Taiwan’s security: The hawkish discourse of Taiwan as little more than a launching pad in a potential U.S. conflict with China could be “disastrous” because it might alienate the American left, which more and more thinks of Taiwan as “just another neoliberal, neo-conservative place that America needs to cut ties with.”

Bipartisan support for guaranteeing the island’s political independence from the mainland is already weakening in Washington, she said. “Taiwan, in that scenario, really risks losing Democratic party support.”

Tensions with the mainland have recently reached what some describe as a new high point since China’s post-Maoist opening to the world. These circumstances, the experts agreed, would likely impact upcoming Taiwanese elections. Local elections are scheduled for just over a year from now, and Taiwan will choose a new president in 2024 after Tsai Ing-wen’s second term ends. Domestic topics remain most crucial to voters, said Rigger, but foreign policy issues are likely to have a larger impact than they did in recent elections. Ing-wen’s Democratic Progress Party hopes to maintain power by presenting itself as tougher on China and cozier with the U.S. than the more Beijing-friendly Kuomintang. Next year’s local elections are likely to serve as a litmus test for whether Ing-wen’s foreign policy will keep her party in power.