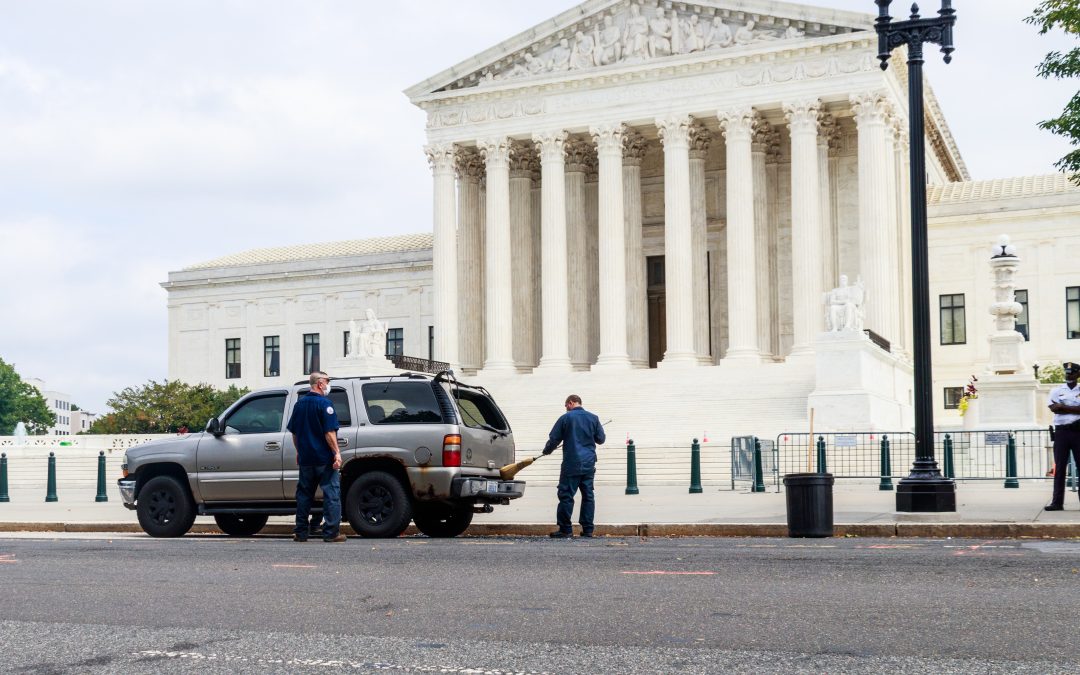 The suspicious vehicle stands outside the U.S. Supreme Court, following a police raid that led to the arrest of a Michigan man on Tuesday. (Linus Hoeller/MNS)

WASHINGTON – U.S. Capitol Police deployed their equivalent of a SWAT team on Tuesday because of a suspicious vehicle parked outside the front entrance of the Supreme Court, eventually removing a Michigan man and arresting him, the same man who had made “concerning statements” while in the Capitol complex area in August.

The incident occurred on the second day of the high court’s new term. Proceedings in the court were not affected, but the area was closed off by the police.

The 55-year old suspect, Dale Paul Melvin from Kimball, Michigan, was taken into custody and has been charged with failure to obey a police officer and assault on an officer.

Police said Melvin parked his Chevrolet Tahoe in a no-parking zone outside the Supreme Court at 9:30 a.m. EST. Melvin, who was in the car, appeared “frustrated” and did not engage with crisis negotiation officers who tried talking to him, only saying that the “time for talking was done.” At around 11:00 a.m., a Capitol Police Containment and Emergency Response Team – comparable to a SWAT team – stormed the car and arrested him.

Melvin had been stopped by police at the Capitol Complex in August and was heard making “concerning statements,” according to police.

The car was still on the scene an hour later. A police officer involved confirmed that police were going through the interior of the car and securing any potential evidence. The police department in a press release later said that no weapons were found inside the Chevrolet.

While not very active on his Facebook page in recent years, Melvin had previously posted a number of posts that showed a dislike of Democratic politicians and their policies and support for the U.S. military. He had also reshared conspiracy theories, including on alternative treatments for cancer, although they did not elicit much reaction from his friends on the social media platform.

In August, a man parked outside the Library of Congress, which is next door to the Supreme Court, claimed to have a bomb in his vehicle – all while holding what appeared to be a detonator. After hours of negotiations with police, he surrendered. There had been no bomb.