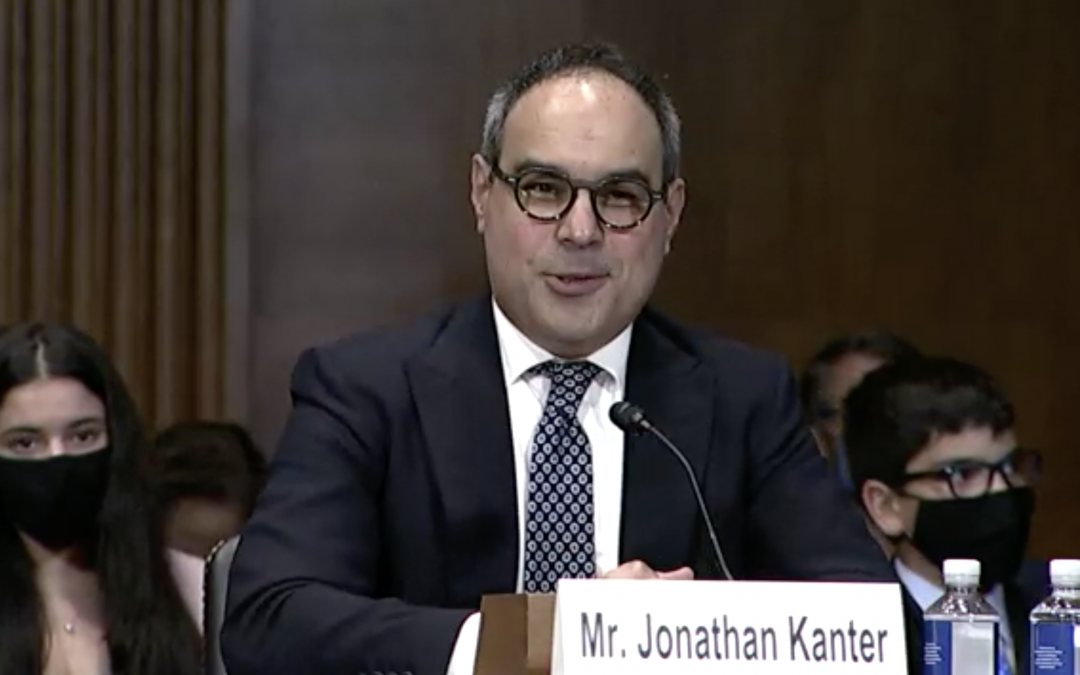 WASHINGTON — The Biden administration’s pledge to beef up federal antitrust enforcement made headway Wednesday as the president’s nominee for the Justice Department’s antitrust chief, Jonathan Kanter, fielded questions from members of the Senate Judiciary Committee. The committee appears likely to approve Kanter and send his nomination to the Senate for confirmation.

As a devout interventionist with more than 20 years of experience in antitrust law, Kanter’s record of promoting economic competition has earned a rare feat: a strong reputation on both sides of the aisle. Nine former DOJ antitrust chiefs underscored his bipartisan support last month in a letter submitted to the Judiciary Committee that urged for his confirmation.

“Antitrust is about promoting competition which is essential to preserving a healthy economy that works for everybody,” Kanter said at the hearing. “Dominant companies have the ability to exploit their monopoly power to the detriment of Americans in so many ways.”

Barring any unforeseen roadblocks, Kanter’s confirmation will round out the administration’s push to appoint anti-monopoly advocates to regulatory leadership positions, including Lina Khan to the Federal Trade Commission and Tim Wu to the National Economic Council. President Biden charted his aggressive approach to anti-competition enforcement in a July executive order.

“[The FTC and DOJ’s Antitrust Division] are a shadow of their former selves, even from during the Reagan administration,” Sen. Amy Klobuchar, D-Minn., said. “And yet, they’re being expected to take on the biggest companies the world has ever known.”

Despite the bipartisan support, Kanter’s confirmation is not expected to move quickly. An average of 33 days elapsed between the committee review and confirmation of Biden’s eight confirmed DOJ appointees. Of those reported out of committee, the average grew to more than 43 days, according to a political appointee tracker by the Partnership for Public Service.

“[Among senators] there’s an increasing interest in getting re-elected as opposed to caring about and guarding the powers of the institution of the Senate,” she said.

While serving as U.S. district judge for the Northern District of California in 2019, Koh held that Qualcomm violated antitrust laws in its efforts to quash competition in the wireless chip market. The ruling—in addition to comments Koh made as a Harvard Law student in the 1990s—served as flashpoints for Republican senators during the hearing.

“It was the 9th Circuit that reversed you [in the Qualcomm ruling],” Sen. Tim Cotton, R-Ark., said. “[The 9th Circuit] said it was a trailblazing application of antitrust laws and an improper excursion beyond the outer limits of those laws.”