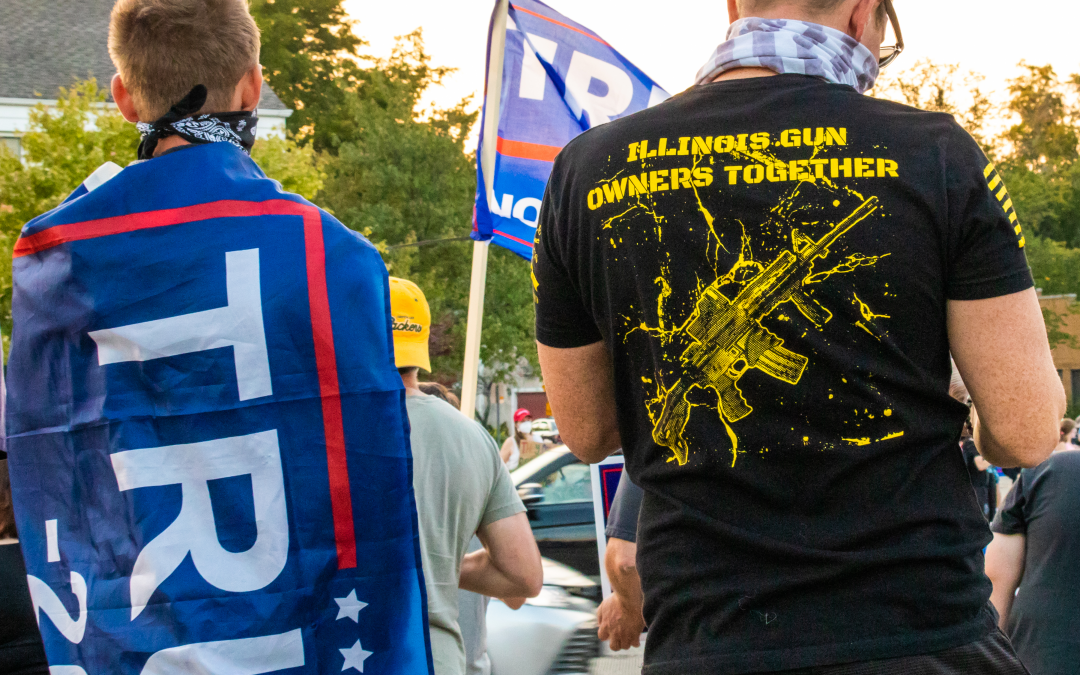 A man in a Trump flag and a man with an "Illinois gun owners together" t-shirt stand next to each other during a far-right rally in Northbrook, Illinois. (Linus Hoeller/MNS)

WASHINGTON – More than one in three Afghanistan and Iraq veterans said in a survey that they perceived extremism as existing within the military and within the veteran community, the head of a veterans’ organization told the House Veterans Affairs Committee hearing on Wednesday.

According to an ongoing survey of over 3,500 former members of military members by the Iraq and Afghanistan Veterans of America, more than one-third of the veterans also said they have directly experienced extremism, IAVA CEO Jeremy Butler told the committee.

Veterans are particularly sought after by domestic terrorist groups because of their skillsets – tactical knowledge, connections, communication and weapons skills, among others, he and other experts said. The veterans can be vulnerable targets, particularly as they transition back to civilian life, searching for a sense of purpose or feeling betrayed by the government.

Cynthia Miller-Idriss of American University said that terrorist organizations seek to convert a feeling of betrayal by the government into violence that is framed as a “heroic action of patriotism for the ‘true nation.’”
That 10% of domestic terror since 2015 had links to veterans while they only make up around 6% of the population means that veteran recruitment must be taken seriously, retired Marine Corps Lt. Col. Joe Plenzler said.

“The threats are real and we are all at risk,” he said. “They breached the security of this building and hunted. They hunted for you.”

In an interview later, he said that while active-duty service members with extremist beliefs can be relatively easily weeded out in the hierarchical structure of the military, but among the 18 million veterans in the U.S., a patchwork of agencies and organizations have to do that work.

Domestic terrorism has been on the rise since the mid-2010s, data from the Center for Strategic and International Studies shows, reaching its highest point in 2020 since 1994, when the data collection began. Numbers for 2021 will soon be made available, Seth Jones of CSIS said. There has also been a recent increase in the number of attacks and plots by active-duty and reserve personnel, he added. “The percentage is growing, which is a concern for us.”

Some Republican committee members took issue with holding the hearing. Rep. Jim Banks, R-Ind., said it was “offensive” that Chairman Rep. Mark Takano, D.-Calif., considered himself the person who would “save the veterans” and accused Democrats of seeing veterans as broken people and extremists. He questioned the impartiality and authority of the witnesses, including Miller-Idriss, for an old Twitter post linking meat consumption to extremism, and the IAVA’s Butler, who had been invited to testify the senior Republican on the committee, Rep. Mike Bost, R-Ill.

“Frankly, sir, this is the problem,” Butler countered. “The questions you are asking are part of the problem here. We are using lies … to avoid addressing the real issues this country is facing.”
In an interview later, Plenzler said he “whole-heartedly” agreed with Butler’s criticism of politically motivated questioning.

Rep. Matt Rosendale, R.-Md., pressed the experts to equate the actions of the Jan. 6 insurrection with those of Black Lives Matter protesters last summer, a line of questioning that was quickly shut down by Plenzler. “It’s one thing if someone burns down a Walmart, another … if someone attacks the nation’s Capitol,” he said. One was an attack on commerce, the other “an attack on the Constitution.”

According to Plenzler, 71 of the people arrested in relation with the insurrection had military ties. “The light is blinking red on the dashboard, so we need to look under the hood and investigate this,” he said.

While some approaches to tackling violent extremism among vets were outlined by the experts – including involvement in civilian society, smoothing out their transition and briefing them on potential recruitment efforts by extremist organizations – Jones of CSIS concluded that “there are a lot of questions we don’t necessarily know yet (but need to be answered) before we can help veterans.”