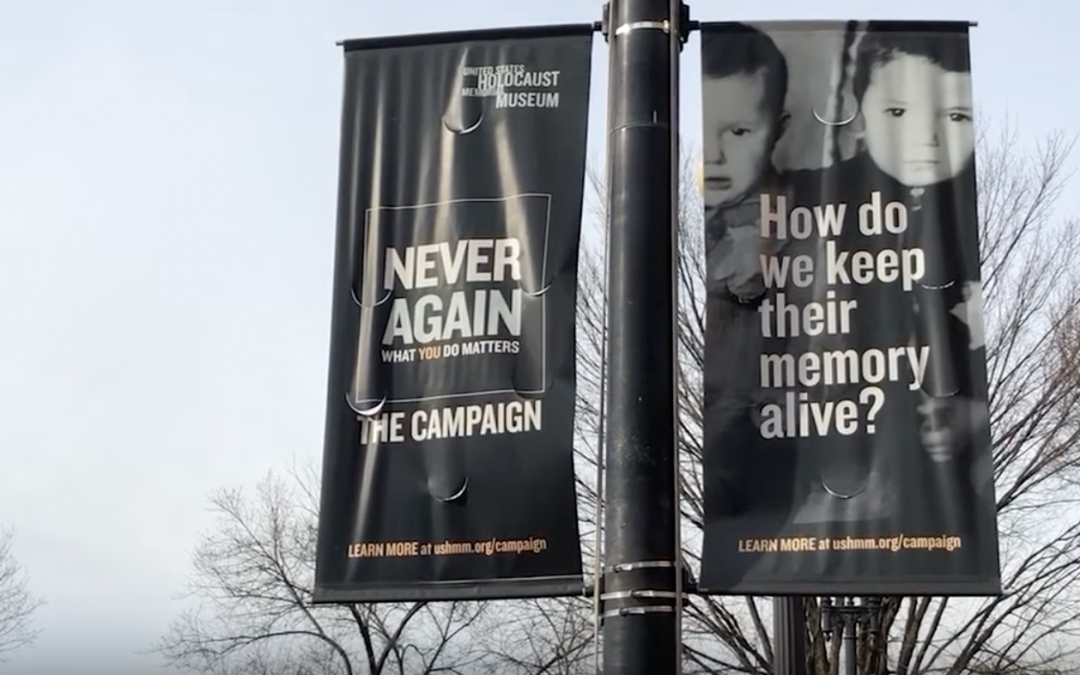 WASHINGTON – Gabriella Karin was eight the first time she heard Nazi propaganda. It was the day after Kristallnacht, the Night of Broken Glass, in Europe. Within four years, officials announced the plan to declare her home country “judenrein” — cleansed of Jews.

Karin, a Jewish woman born in Czechoslovakia, survived the Holocaust by adopting a Christian identity, taking a new name, attending daily mass and living in a convent. She then spent years in hiding with her mother in a house across the street from a Gestapo headquarters.

“What bothers me the most is how people can hate each other,” Karin said. “That people can turn against each other, I cannot understand.”

“The Nazis were ardent anti-Semites from the very start but they had to convince many Germans to support their radical agenda,” Luckert said.

According to the Anti-Defamation League, there were 2,713 cases of white supremacist propaganda documented in the United States in 2019. It’s the highest number the ADL has ever recorded.

“It’s upsetting me,” Karin said. Karin, a professional artist, shares her story through art at the Los Angeles Museum of the Holocaust and in schools across the city.

The 2,713 incidences recorded by the ADL include only propaganda in physical spaces, including “the distribution of racist, anti-Semitic and anti-LGBTQ fliers, stickers, banners and posters.” The ADL separately tracks hate speech posted online.

“This is really significant because it’s the highest we have tracked,” ADL Investigative Researcher Amy Iandioro said. “We have this increase partly because of coordinated efforts by white supremacist groups.”

The 2,713 incidences include only propaganda in physical spaces, including “the distribution of racist, anti-Semitic and anti-LGBTQ fliers, stickers, banners and posters.” The ADL separately tracks hate speech posted online.

To combat the distribution of hate speech, especially that of an anti-Semitic nature, Rep. Carolyn Maloney, D-N.Y., sponsored a bill in the House of Representatives that would expand funding for Holocaust education programming. It passed the House 393-5 in January. The bill was then referred to the Senate Committee on Energy and Natural Resources.

“I feel that we not only need to be reactive to these attacks,” Maloney said, “but also be proactive in stopping them before they even occur – and that happens through education.”

Karin hopes Holocaust education will be sculpted around survivors’ stories.

“I don’t believe something can substitute the survivors,” Karin said.

Maloney recognizes the “tough truth” that Holocaust survivors will soon no longer be here to share their stories personally.

“We can at least make sure that all teachers have the tools they need to bring this hard-to-teach subject into their classrooms in a meaningful and appropriate way,” Maloney said.

Karin said in her experience Holocaust education can make young people more empathetic and help them grapple with issues they face in their own lives, like racism or trouble at home.“Many, many times kids come up to me and say, ‘You can do it, I can do it too,’” Karin said.

More than 600 of the 2,713 incidents tracked by the ADL in 2019 took place on college campuses. At Northwestern University, a series of stickers bearing a white supremacist logo were discovered around campus last spring.

“It makes me feel like I shouldn’t be in these spaces,” said student Rishi Mahesh, who was the first to find a sticker.

Luckert said there are elements of white supremacist distribution today that are reminiscent of the 1930s. For example, the Nazis technology like radio to spread propaganda across borders is akin to internet usage today.

“The idea for the Nazis is to expand their messages, tailor to those particular audiences abroad to promote anti-Semitism,” he said. “The Nazis saw that as an important tool as propaganda.” Nazis also targeted campuses with Hitler Youth and book burnings even before they came to power, according to Luckert. “Essentially the student youth organizations had become Nazified.”

Luckert said the threat posed by distribution of white supremacist propaganda today is “a very real one,” citing violence incited by white supremacists, including the synagogue shootings in Poway, California, and Pittsburgh.

However, unlike the rise of Nazism, he said, white supremacists today don’t have the massive base of followers that the Nazis built before coming into power.

Scott Blackburn, research director at the Institute for Free Speech, said the government cannot and should not regulate political speech. He said existing regulations limiting freedom of speech should stay in place, but remain narrow. Hate speech is protected under the First Amendment.

“It’s much harder for hate speech because it’s so context-dependent,” Blackburn said. “I think it’s important in debates about speech restrictions and debates about hate speech specifically to remember that applications of these laws will never be done perfectly.”

Said Luckert: “It’s really up to all of us to counter these messages of hate.” Iandioro with the ADL said reporting white supremacist propaganda to the appropriate authorities is paramount.

“Very upsetting, I can’t tell you how upsetting,” said Karin. “I am worrying about the next generation a lot.”