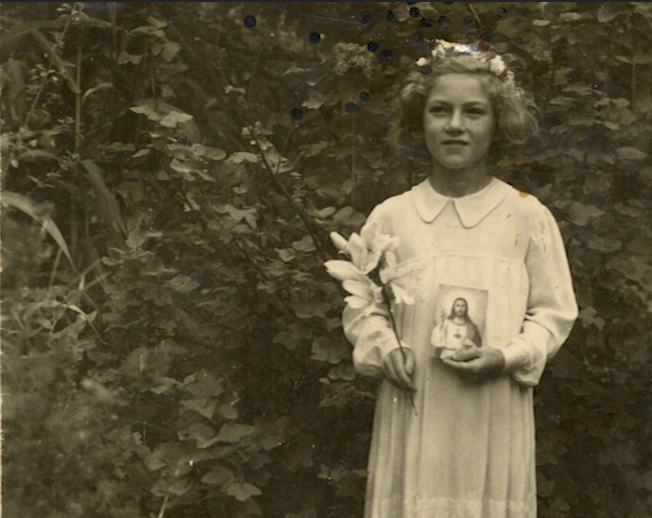 Halina Yasharoff Peabody survived the Holocaust by hiding in plain sight. Peabody, her mother and sister obtained papers identifying them as Catholics. (Courtesy of the United States Holocaust Memorial Museum and Halina Peabody)

Holocaust survivor Halina Yasharoff Peabody remembered her pleas to her mother as they stepped off a train and walked toward Gestapo in Jaroslaw, Poland. The jig was up — a German discovered they were Jewish and was forcing them to surrender.

Peabody was born in 1932, so she was a young child in what is now Ukraine when World War II broke out. Her father fled to Romania, thinking only men were in danger under Soviet occupation. When he tried to return home, he was accused of espionage and deported to Siberia. After the war ended, the four family members were reunited.

After her father was deported, Peabody, her mother Olga Litman, and younger sister Eva obtained false identity papers that identified them as Catholic and left to live in Jaroslaw, Poland.

“I understood that my life depended on it,” Peabody said. “So I got very good at pretending to be Catholic.”

On the train to Jaroslaw, a German discovered they were Jewish and said he would turn them in. Olga gave the man all of their belongings, asking in return that they be shot when handed over to the Gestapo so that they would not be separated. Olga feared her daughters would not survive. After Peabody’s pleas to her mother, Olga began bargaining with the German again, finally asking, “Why do you want us on your conscience?”

He let them go.

Today, Peabody volunteers at the U.S. Holocaust Memorial Museum, sharing her story to honor her mother and ensure that the Holocaust is not forgotten.

“I think that one of the things that our survivors — you hear from them all the time — is they feel a responsibility to share their history. In some ways it’s about remembering and honoring those that didn’t survive,” said Diane Saltzman, director of constituency engagement for the U.S. Holocaust Memorial Museum. “But it’s also to make sure that they share the lessons of what happened to them so that people today can learn from it.”

“If you’re not careful, it can happen to you,” Peabody said. “So please, watch out.”