Ending an endless conflict: efforts beyond the White House to bring peace to Israel and Palestine 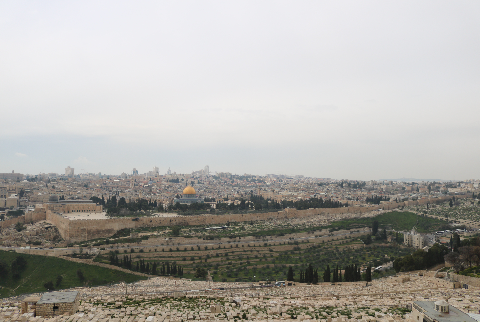 Ending an endless conflict: efforts beyond the White House to bring peace to Israel and Palestine from Medill Washington on Vimeo.

WASHINGTON – In the Israeli settlement of Shiloh, located where the ancient Biblical city of the same name is rumored to have been situated, a Jewish woman defends her decision to move to there.

“We can have different views about who this land can belong to,” Eliana Passentin said, “but if we want to teach the next generation to move together, we don’t teach hatred.”

About 60 miles north, a Palestinian artist runs a gallery in the Israeli town of Umm al-Fahm, which borders the Green Line separating the State of Israel from the West Bank. Said Abu Shakra said he hopes his gallery can attract Arab-Israelis, Jewish-Israelis and Palestinians.

“We started to collect our pieces and to create again our identity,” Abu Shakra said.

Despite some efforts in Israel and the Palestinian territories to live peacefully, peace has not prevailed. Since the Carter administration, the United States has repeatedly attempted to broker peace in the region. Some efforts have nearly succeeded, but ultimately come up short.

Two bloody Intifadas plagued the region between 1987-1993 and 2000-2005. Over the past five years, violence has continued to escalate. The Palestinian militant group Hamas governs the Gaza strip, and over the course of 2019, fired hundreds of rockets into Israel, according to the Israel Defense Forces. Between March and November 2018, Israeli military forces killed 189 Palestinian demonstrators, according to Human Rights Watch.

In January, the Trump administration released its own Mideast peace plan. The 181-page plan proposes giving control of Jerusalem to Israel and allows Israel to oversee security of the West Bank. It also calls for Hamas to disarm. It does not discuss the right of return, referring to the approximately 7 million Palestinians displaced around the world.

It was applauded by Israeli Prime Minister Benjamin Netanyahu and rejected by Palestinian leadership. The plan also was criticized by Democratic members of Congress and former diplomats.

“It’s not a peace process,” said Rep. Alan Lowenthal, D-Calif. “It does not call for the two sides to come together and talk about it.”

Before the Trump administration unveiled its proposal, Lowenthal sponsored a resolution approved by the House of Representatives in December that puts forth a different proposal. It calls for a two-state solution: “that enhances stability and security for Israel, Palestinians, and their neighbors can both ensure the state of Israel’s survival as a Jewish and democratic state and fulfill the legitimate aspirations of the Palestinian people for a state of their own.”

The bill passed 226-188, with four Democrats voting against it and five Republicans voting for it.

Trump’s proposal is the right approach and “marks an historic opportunity that must be seized upon,” said Rep. Joe Wilson, R-S.C.

Lowenthal said the resolution was not drafted with the intention of immediately establishing peace in the region. In fact, he said, language in the resolution makes it clear it is ultimately up to the Israelis and Palestinians to make a peace deal. The U.S. can help set the stage.

“Time is not on our side,” Lowenthal said, urging Israelis and Palestinians to come to the negotiating table. “How you deal with the settlements, national security, the rights of return, all those have to be discussed in negotiations between the two sides.”

And while Congress and the White House attempt to mediate peace in different ways, think tanks and nonprofits are working on less grand issues, known as “track two” discussions, like bringing clean water to the West Bank.

“We need to do something that’s highly practical, that sends a message that when you cooperate, something good comes out of it,” former ambassador Dennis Ross said. Ross worked in Middle Eastern diplomacy from the Reagan administration through the Obama administration before stepping down to become a distinguished fellow at the Washington Institute for Near East Policy.

Working at a think tank, Ross said, “you can do things formal officials can’t do.”

These “highly practical” efforts work best when they involve Israelis and Palestinians on the ground, Ross said. Citizens like Passentin and Abu Shakra are affected by the conflict on a daily basis and can offer ideas that would make their day-to-day existence easier.

“If I didn’t see Israelis and Palestinians who were willing to work together,” Ross said, “it wouldn’t matter what I wanted to do.”

Even the coronavirus could offer an opportunity for collaboration.

“Here’s an area where an operation is unmistakably in mutual interest,” Ross said. “How do you take advantage of a crisis to advance a larger cause?”

At the Center for Strategic and International Studies, another Washington think tank, attention has been diverted from the Israeli-Palestinian conflict in recent years. Will Todman, who works in the center’s Middle East Program, cites fatigue and pessimism.

Todman said another bout of violence could reignite interest in the conflict.

The dynamics in the region have shifted in recent years, as Israel demonstrated its military and economic prowess and formed alliances with Arab countries like Saudi Arabia and the United Arab Emirates. Ross said the United States should take advantage of its diplomatic relationships with these nations to help bring peace to Israel and Palestine.