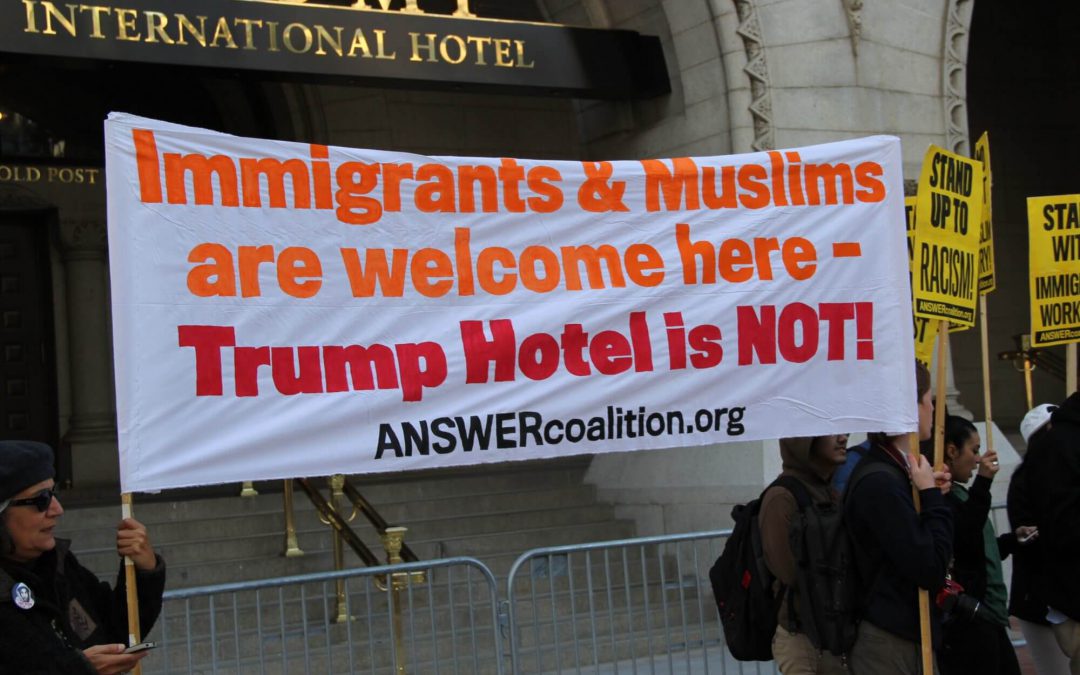 A group protests against Trump's immigration policies outside the Trump International Hotel in Washington. (MNS)

WASHINGTON—While some Democrats in Congress have criticized the Trump administration’s program requiring asylum seekers to wait in Mexico for a ruling on their claims, some experts say lawmakers should attempt to block funds for the program and require more oversight.

Doing so will be difficult because of the Republican-controlled Senate, which is likely to block attempts to limit President Donald Trump’s immigration policies.

“I think what’s happening right now is that the political moment is creating a sort of situation in which lawmakers don’t see legislation as being particularly effective,” said Eladio Bobadilla, assistant professor of history at the University of Kentucky.

Democrats are hoping to regain the White House and gain more congressional Senate seats before pushing for serious immigration reform. Meanwhile, they should attempt to defund the program and require more oversight, which will give a better indication of what is happening to asylum seekers in Mexico and allow Congress to pass legislation addressing migrants’ needs, said Bobadilla.

“[The “Remain in Mexico” program] is so secretive,” said Bobadilla. “We don’t actually know how it’s functioning on the ground other than some of the horror stories we do know about.”

There have been more than 800 reports of rape, kidnapping, torture and other violent attacks against asylum seeker sunder Trump’s program, according to the Latin America Working Group.

To some conservatives, American authorities are not responsible for migrants’ conditions in Mexico because they are in foreign territory. Under a U.S.-Mexico agreement, Mexico must provide work visas to asylum seekers so they can meet basic standards of living while U.S. courts process their claims, according to a Mexican government press release.

To Castañeda, the U.S. is responsible for asylum seekers in Mexico since they are seeking refuge in American soil. He said that despite leaving their home countries, asylum seekers might still fear persecution in Mexico.

“The U.S. is an active participant [in this agreement], even if [those seeking asylum in the U.S.] are in another country,” said Castañeda.

In 2008, the Obama administration launched a program that sent illegal immigrants back to cities in Mexico. The program sought to prevent human smuggling and discourage future border crossings by placing migrants in unfamiliar locations in Mexico.

“We’ve been asking Mexico to do our dirty work for many years in terms of slowing down migrants, arresting them and deporting them,” said Jason De Léon, professor of anthropology and Chicano studies at UCLA. “This is just one more in a long line of policy decisions that we’ve done to make things difficult for migrants in Mexico and at the same time absolving the U.S. government of any blame.”