Biden blows away the field in crucial South Carolina win 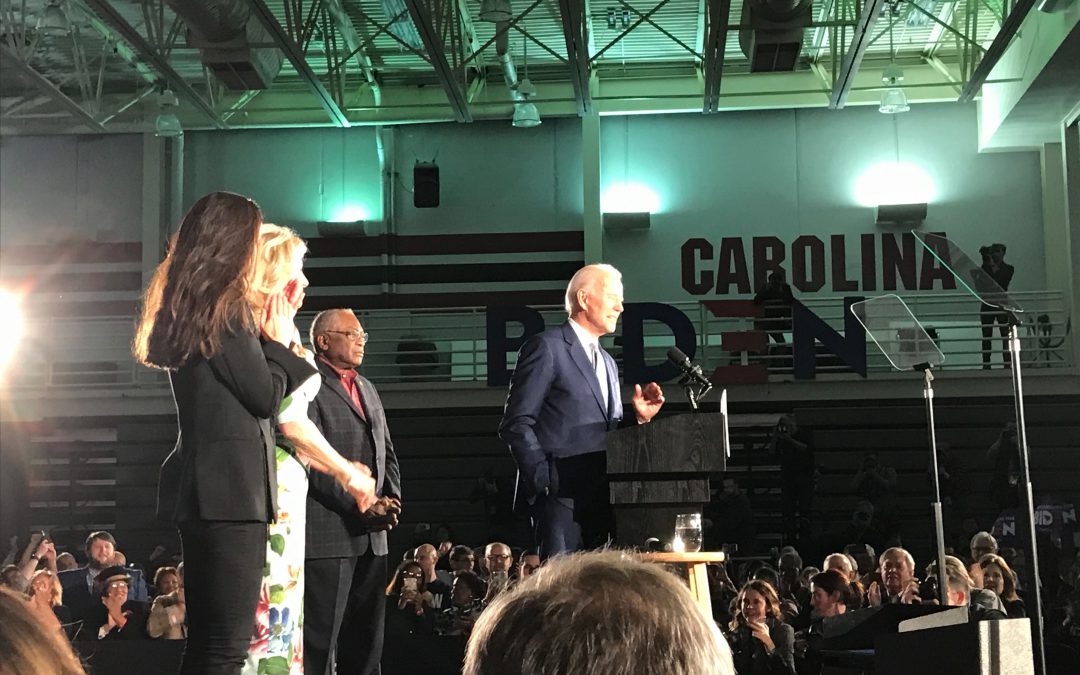 COLUMBIA, South Carolina — With all the resources he put into the state and the support he had from the African American community, it was almost a foregone conclusion that Joe Biden would win South Carolina. The only question was by how much.

The former vice president answered that question in resounding fashion Saturday night, taking nearly 50 percent of the vote and finishing close to 30 points ahead of the second-place finisher, Vermont Sen. Bernie Sanders.

Biden reveled in the victory at the Carolina Volleyball Center in Columbia, finally getting a chance to celebrate after subpar showings in Iowa, New Hampshire and Nevada.

“There were people ready to declare this candidacy dead,” Biden said. “But we just won, and we won big.”

The performance gives Biden much-needed momentum heading into Super Tuesday, when 14 states plus American Samoa will cast votes, which will divvy up about 34 percent of the convention delegates. Biden is now in second place in overall delegates behind Sanders, but more than 96 percent of the delegates have yet to be awarded.

He received a crucial endorsement earlier this week from Rep. Jim Clyburn, D-S.C., the House Majority Whip. Ayanna Glover, an Orangeburg County resident, was already planning to vote for Biden before Clyburn’s endorsement, but said Clyburn’s announcement sealed the deal for her and many other voters.

“The Black Caucus has spoken,” Glover said. “I was a little afraid because of how he came into South Carolina. I think tonight was a determining factor for those (Super Tuesday voters) who were undecided.”

Biden was brief but jovial in his remarks, delivered before an enthusiastic crowd that nearly filled the venue. He drew a stark contrast between himself and Sanders, an independent, and former New York mayor Michael Bloomberg, a Republican for much of his time leading America’s largest city.

“The Democrats want to nominate someone who’s a Democrat,” Biden said. “An Obama-Biden Democrat!”

Elizabeth Wilson, a Columbia resident, said she has been supporting Biden for a long time because he’s the best person to unite the country he is inspiring. She was confident his South Carolina performance will propel him to a strong showing on Tuesday.

Clyburn spoke on Saturday evening as well, saying this election is about “the goodness of America” and calling Biden “a real, good man.” Biden echoed that message, saying the next president needs to be in touch with the American people to reverse the damage done under the Trump administration.

“Talk is cheap. We need real changes right now,” Biden said. “This is a battle for the soul of the United States of America.”