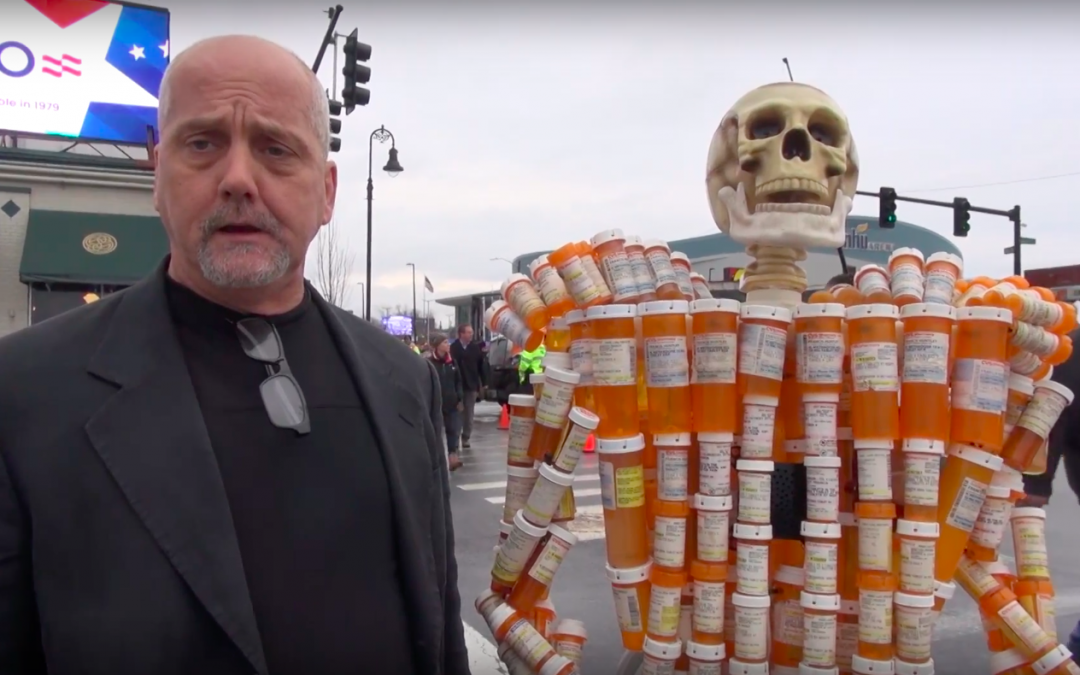 MANCHESTER, N.H. — Frank Huntley wheels around a skeleton adorned with his old opioid pill bottles to campaign rallies across New Hampshire. Huntley, who is now six years into his recovery, used the skeleton “Pill Man” to confront presidential candidates about the opioid crisis.

“Pill Man is to open people’s eyes,” said Huntley. “The world is watching [the candidates] for the next president …I want to see what they want to do. I want to see their reaction when I show them Pill Man.”

For 15 years, 52-year-old Huntley depended on opioids, which he first received as a pain medication from his doctor. He said he lost himself, his marriage, his business — nearly everything to his addiction. Huntley said he wants the candidates to consider the impact the opioid epidemic has had on thousands of families across the country.

The misuse of and addiction to opioids is considered a national crisis. In 2017, over 47,000 Americans died from opioid overdoses, according to reports from the National Institute on Drug Abuse. New Hampshire suffers disproportionately, with 424 opioid overdoses in the state alone. President Donald Trump once called New Hampshire the “drug-infested state.”

There are gaps in addiction treatment services in New Hampshire — little oversight of sober homes, not enough beds at recovery centers for Medicaid users, and not enough resources generally, according to Donna Martson, National Alliance on Mental Health certified parent support group facilitator and recovery coach.

For New Hampshire residents touched by the opioid crisis, the Democratic candidates’ health care proposals can be a huge driver in who they vote for. Those routinely disappointed by the state’s addiction treatment efforts, however, don’t expect much from any talk of change and are largely voting for Trump.

“Nothing is going to get done. There’s a lot of barriers,” said Carlos Zamaban, a 58-year-old recovering addict. “When it comes to local cities and towns, they might not put the same effort as the federal government.”

“Pill Man” creator Huntley hasn’t decided who he is voting for yet. He said he likes Sen. Elizabeth Warren, D-Mass., who has released the most ambitious proposal on drug addiction.

Warren’s plan woiuld dedicate $100 billion over 10 years to tackle the opioid crisis with more spending on treatment services paid for through a wealth tax. In her proposal, Warren vows to pursue criminal charges against the Sacklers, the New Hampshire family behind Purdue Pharma LP, developer of the addictive opioid OxyContin.

Sen. Amy Klobuchar, D-Minn., also proposed a $100 billion policy addressing addiction funded in part by manufacturers and importers, through a 2-cent fee on each milligram of active opioid ingredients in prescription pain pills.

At her campaign rallies, Klobuchar talks about her own father, an alcoholic, and how his substance abuse disorder taught her to accept parts of people she doesn’t always agree with.

“He chose treatment … in his words, he was pursued by grace,” Klobuchar said. “I don’t always see things in the extremes … if I wasn’t like that growing up, I wouldn’t have been able to love my Dad like I did and I do.”

Some New Hampshire residents touched by the epidemic said they did not think spending more money on treatment would benefit them.

Jonathan Egan, a 31-year-old Independent and a former heroin user, is voting for Trump. He likes that Trump is creating change, even if it’s not always change that he agrees with.

He doesn’t like policy proposals where people are handed benefits they don’t work for. He appreciates policies to decriminalize opioids but doesn’t believe change will happen.

“Saying and doing are two different things. I’ve heard it before,” said Egan, in reference to Warren’s ambitious drug treatment proposal. According to Egan, compared to previous presidents, Trump has done the most work to address the opioid crisis.

According to state records, the New Hampshire has received $60 million in federal funding to implement a statewide program called, The Doorway, where those battling addiction can walk in and begin the process of getting help. Egan has worked at The Doorway’s Manchester location.

Under the Trump administration, New Hampshire has also received an additional $5 million through a Medicaid grant to improve opioid addiction treatment for pregnant mothers. The “maternal opioid misuse model” will be implemented in 2021. The $5 million will be distributed over five years.

Richard Beauliu, father to a pregnant 20-year-old with a substance abuse disorder, will also vote for Trump in the primaries. He believes that Trump’s immigration policies also help keep the synthetic opioid, fentanyl, out of the country.

Beauliu said his own daughter started using heroin because it was so affordable when mixed with fentanyl.

A convicted felon, Banfield said he can’t vote, but he would support Democratic businessman Andrew Yang if he could, because he likes Yang’s plans for a guaranteed income and the decriminalization of opioids.