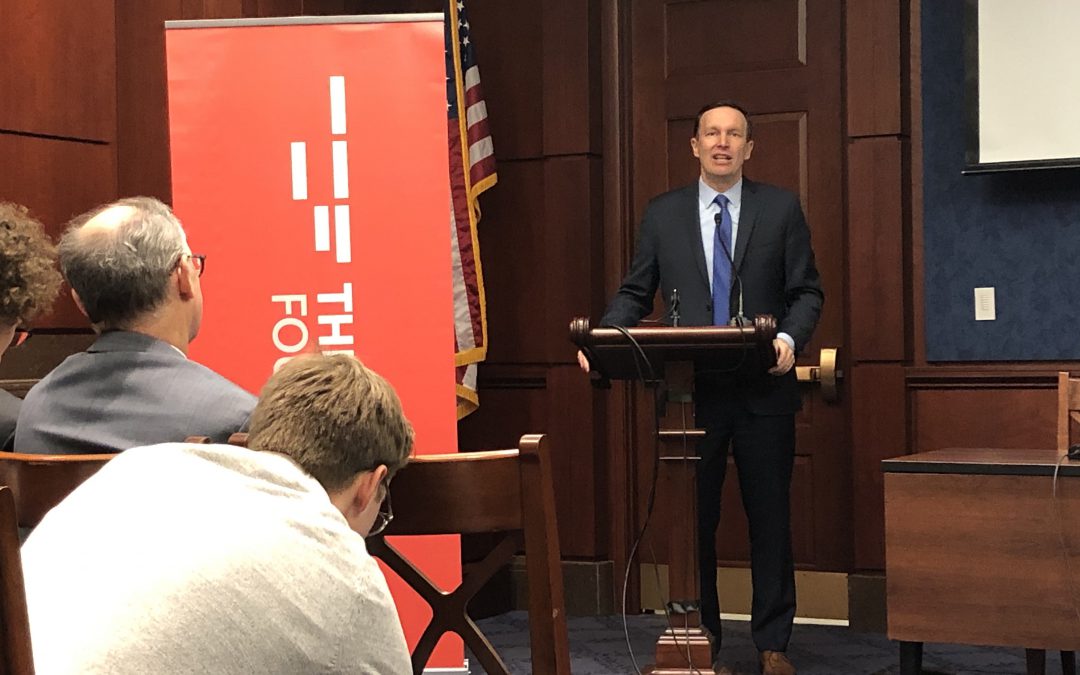 WASHINGTON — National security will likely be an important issue for Democrats during the 2020 presidential election cycle, Sen. Chris Murphy, D-Conn., said Wednesday at a panel discussion on foreign policy.

“We just went through an impeachment crisis that was all about foreign policy,” Murphy said. “This is not a domestic policy impeachment trial. This was about a president trying to use the foreign policy of the nation to gain political personal benefit.”

The senator, who sits on the Senate Foreign Relations Committee, gave a keynote address before The Century Foundation’s panel discussion on progressive U.S. policies in the Middle East during the post-Trump era. Rep. Ro Khanna, D-Calif., — who has partnered with Murphy on legislation that seeks to end U.S. support for the Saudi-led war in Yemen — also addressed the audience.

It seems, Murphy added, that President Donald Trump stumbles into a near disaster “somewhere around the world” almost every month. Because of this incoherent approach, Murphy said the country could foreseeably be in the middle of another crisis when fall comes.

Because of that possibility, Murphy said the Democratic Party should be ready to campaign “in whole or in part” on national security matters.

Murphy said while pundits suggest an election cycle focused on national security will benefit Republican candidates, that doesn’t have to be the case. The senator argued that a progressive foreign policy is an “internationalist-looking” foreign policy.

Some progressives, Murphy said, argue that U.S. involvement in foreign entanglements distracts from economic priorities at home. Others, he said, suggest it is “old-fashioned, imperialistic American hubris” to believe the U.S. can solve any global conflicts.

But Murphy argued there is no domestic priority that does not involve foreign policy. The failure to contest foreign nations attacking American democracy leaves the nation vulnerable to more attacks, Murphy added. Combating climate change and protecting American’s wages require a global presence, he said.

In June 2017, Trump announced the U.S. would stop participating in the Paris climate agreement. Nearly 200 countries — including the U.S. — signed the agreement in 2015, pledging to reduce greenhouse gas emissions. Murphy said re-entering the agreement would be the easy part.

“The hard part is then building an international consensus to actually get countries to meet those goals,” Murphy said. “That involves an America that is everywhere, in order to protect our environmental interests.”

Dina Esfandiary, a fellow at The Century Foundation, echoed concerns about the Trump administration’s broken agreements with foreign countries. In May 2018 Trump broke from the Iran nuclear deal. Under the Obama-era agreement, reached by seven countries, Iran agreed to limit sensitive nuclear activities and permit inspections in return for lifted economic sanctions.

Esfandiary, an international security program research fellow at Harvard’s Kennedy School, said Iranian leadership might be less willing to engage diplomatically with a Democratic administration because they know a Republican administration might undo any progress made.

Khanna — who represents California’s 17th District, the heart of Silicon Valley — also criticized the U.S. relationship with Iran. He said the U.S. has been “bogged down” in over 40 conflicts since 1979, the last year China went to war. During that period, he said China invested in infrastructure, higher education, high-speed internet and clean energy. Meanwhile, Khanna said the U.S. has been obsessed with the threat posed by Iran, a country that only makes up .44% of the gross domestic product.