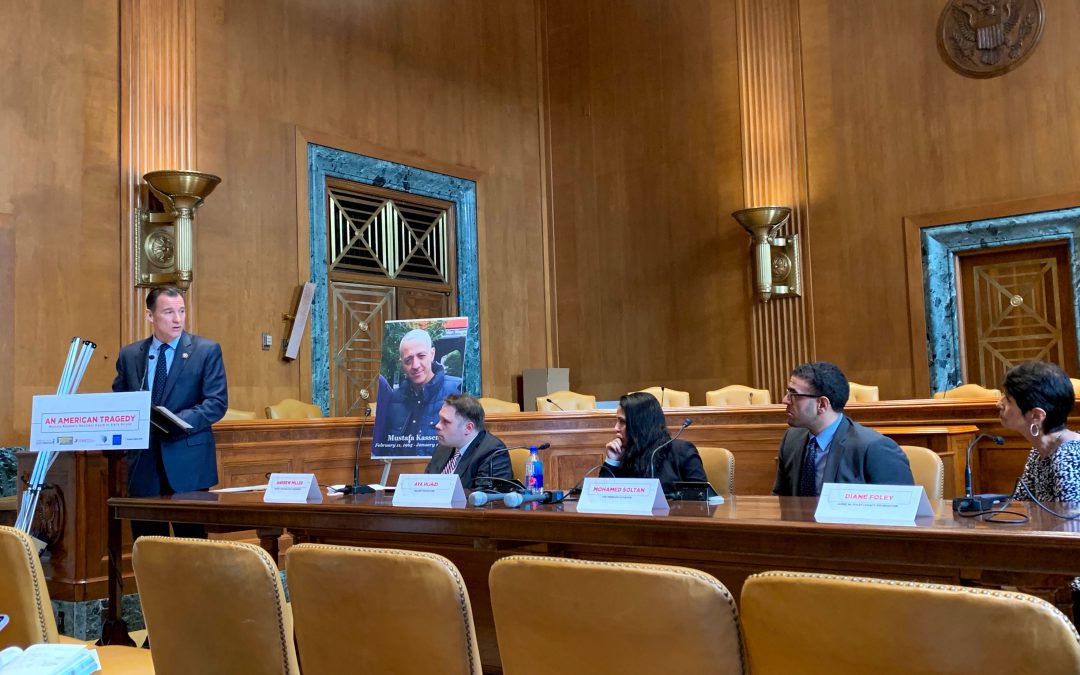 WASHINGTON— Several Democratic and Republican members of Congress on Wednesday called on President Donald Trump to impose sanctions on those responsible for the death of Mustafa Kassem, an American citizen who died Monday in an Egyptian prison after being detained in 2013.

Rep. Jim Mc Govern, D-Mass., said that the current administration did not do enough to save Kassem’s life. Several members of Congress had called on Egypt directly to release Kassem.

“It is time for a debate on our foreign policy with Egypt,” said McGovern. “We cannot continue to provide massive military support to an authoritarian leader that imprisons American citizens and tens of thousands of its own citizens in trumped up charges.”

Egypt is the world’s second largest recipient of American military aid. In 2019, the U.S. provided Egypt with $1.4 billion in bilateral assistance, according to the Congressional Research Service.

An Egyptian-American, Kassem was on a home visit to Egypt when he was arrested during a military crackdown and faced more than five years in pretrial detention. The Egyptian government believed Kassem was linked to President Abdel Fattah el-Sisi’s political opposition. After a mass trial, Kassem was eventually sentenced to 15 years in prison, but died earlier this week after going on hunger strike.

While in prison, Kassem sent letters to Trump and Vice President Mike Pence urging the administration to secure his release. It is unclear whether the president and vice president read his letters.

“These guards keep insulin from me and do not treat my basic medical needs. My body now shakes and has become frail and weak. I no longer recognize myself,” Kassem wrote in a letter to the president. “I don’t want my children to remember me this way, but I am going on a hunger strike because I am losing my will and don’t know how else to get your attention. President Trump, from one American to another, I need your help.”

Sen. Patrick Leahy, D-Vt., who organized Wednesday’s event and the other members of Congress criticized Trump for calling el-Sisi his “favorite dictator.”

Sen. Chris Van Hollen, D-Md., acknowledged that the Trump administration rightfully sanctioned Iranian officials responsible for committing similar acts against American citizens in Iran, and urged Trump to act as forcefully toward Egyptian officials who are infringing on human rights.

Sen. Chris Murphy, D-Conn., urged the administration to use laws that permit sanctions against foreign officials who infringe on human rights and that allow a president to cut aid to countries that don’t honor human rights to limit Egyptian aid.

“We need to take a harder line with the Egyptian government and Congress has given the president the tools to do that,” said Murphy.

Rep. Peter King, R-N.Y., who represented Kassem in Congress, said he sent letters to the Trump administration about Kassem’s imprisonment. Although he acknowledged the importance of maintaining a good relationship with Egypt to fight al-Qaida and ISIS, the New York representative also called on Trump to impose sanctions on individuals responsible for Kassem’s death.

“I don’t see this as being a partisan issue. To me, all Americans should be united behind this issue,” said King. “We cannot have American citizens, let alone innocent American citizens, being arrested overseas, held under the most inhumane conditions.”

Diane Foley, whose son James, a journalist, was abducted and killed in Syria by ISIS in 2014, said that the Obama and Trump administrations had leverage to release Kassem.

“This administration and the previous knew who Mustafa was,” said Foley. “They knew he was innocent and so this makes this an incredible tragedy because we could’ve done better and we must do better. So I call on the Trump administration to save the Americans that are still being held.”

On Tuesday, the Egyptian foreign minister was at the White House for a meeting.