Doomsday closer than ever before say scientists, global leaders 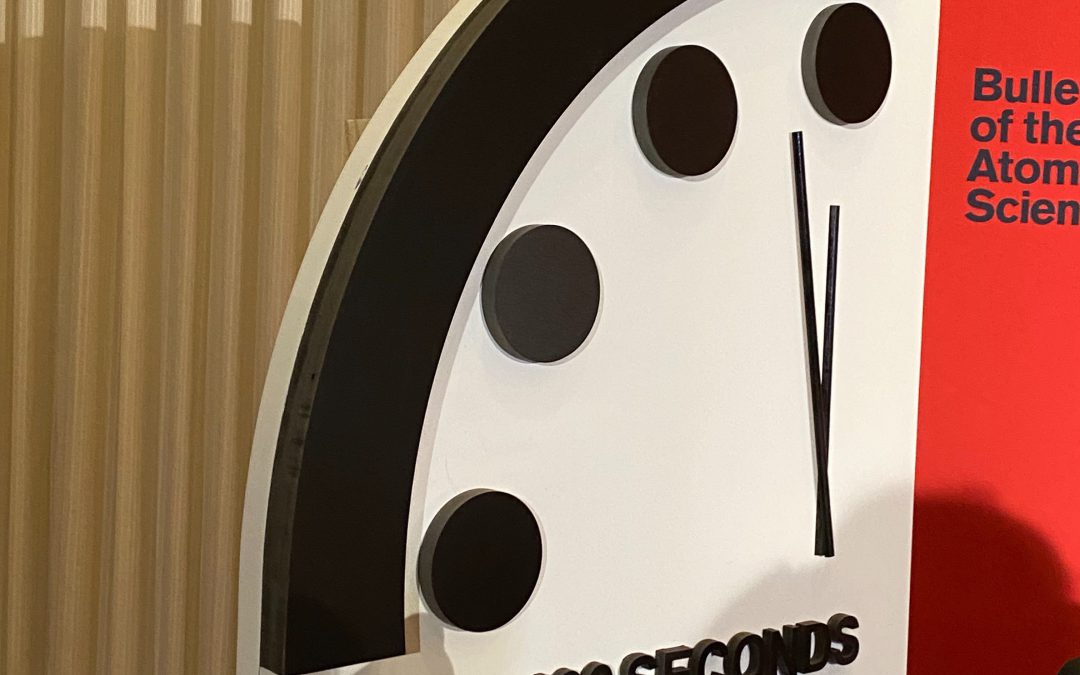 The Doomsday Clock has shifted to 100 seconds to midnight, the closest its been in history (Zamone Perez / MNS)

WASHINGTON— The Doomsday Clock was reset to 100 seconds before midnight, the closest the clock has inched to midnight and a signal of “a very dangerous world,” officials of the Bulletin of the Atomic Scientists said on Thursday.

The world’s proximity to Doomsday moved 20 seconds closer because of the persistence of “abnormal” actions and issues, such as the inability of the public to discern true and false information, Robert Rosner, a member of the Bulletin’s Science and Security Board, said after unveiling the new clock’s new setting.

In 2002, the clock was set at seven minutes to midnight.

“What we have called the ‘new abnormal’ this last year, a dismal state of affairs in the realms of nuclear security and climate change, now has become an apparently enduring, disturbing reality, which things are not getting better,” he said. “We have indeed normalized a very dangerous world.”

With midnight on the clock representing the end of human civilization, members of the Bulletin have monitored threats across the globe since 1947 — with an initial focus on nuclear proliferation after World War II.

But since the clock was created, other issues have gained the attention of the Bulletin, including increasingly rapid climate change and disinformation campaigns around the world.

Political figures from across the world also attended the unveiling to urge the public, governments and news media to take action to combat the numerous threats that led to the clocks move forward. Brown cautioned that the world is “not there yet,” but it will take serious efforts to move the clock backward.

“The world is not over,” Brown said. “We have an incredible opportunity to reverse the nuclear arms race, the carbon emissions and the headlong run to ever more dangerous technology.”

Robinson, in a light-hearted moment at the more somber event, said she felt a “strong personal reaction, the reaction of an angry granny,” after she heard the news of the clock’s move forward. She said the factors that led to that decision were “unacceptable.”

With the 75th anniversary of the United Nations this year, Former UN Secretary-General Ban Ki-moon called on themes of multilateralism and diplomacy to help solve issues regarding climate change and nuclear threats, urging the United States to take a leadership role in the effort.

“I am deeply concerned by the fact that multilateralism is now on the serious attack,” Ki-moon said. “This is an opportunity for world leaders and citizens to renew this commitment to multilateralism.”

Brown urged people to understand the weight of the problems that moved the Doomsday Clock forward and speak out about the major issues facing the planet.