FOR MIGRANT CHILDREN AT THE BORDER, CONFUSION CLOUDS THE FUTURE 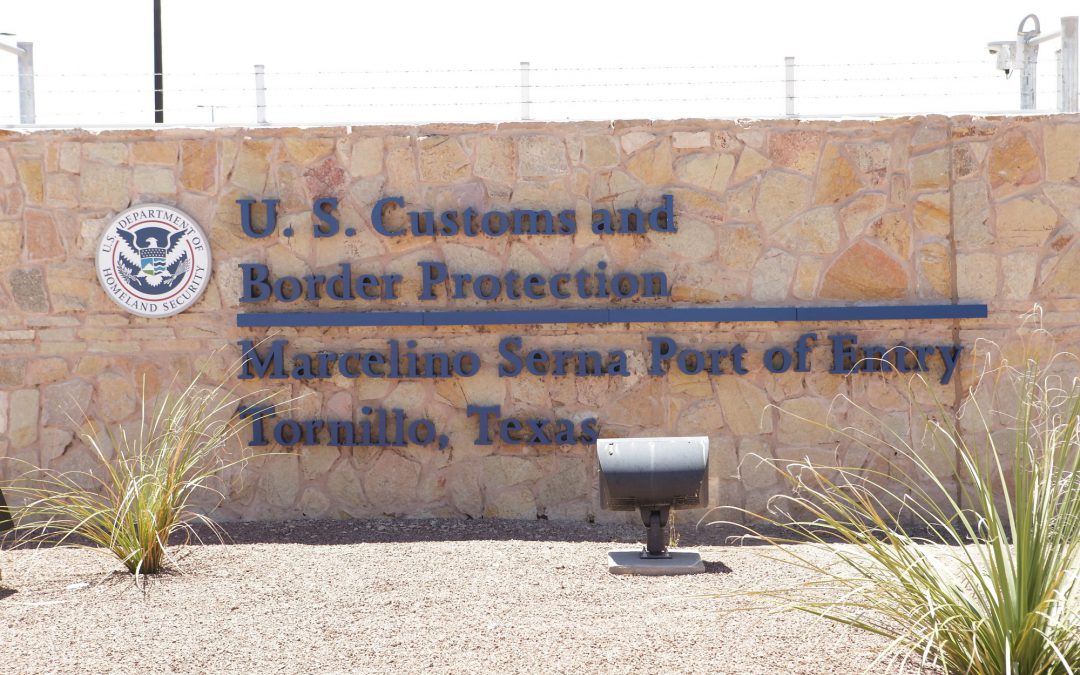 WASHINGTON – In the months after the Trump administration formally ended its family separation policy at the U.S.-Mexico border, more than 200 new immigrant children were separated from their families and the number previously separated was much larger than reported. And thousands more than originally reported were separated earlier.

According to some lawmakers, the new separations and underreporting of previous separations is the result of two issues: a lack of communication among immigrant agencies and an unwritten policy that still permits family separations.

“It’s as if nobody discussed how reunification would happen before this policy was implemented,” said Rep. Diana DeGette, D-Colo., chairman of the House Energy and Commerce Subcommittee on Oversight and Investigations, during a Feb. 7 hearing on the Trump administration’s family separation policy.

“I really think that what we’re talking about is state-sponsored child abuse, and I would go as far as to say kidnapping of children,” Rep. Jan Schakowsky, D-Ill., said during the hearing.

Family separations began under the Justice Department’s “zero tolerance” policy. After public outcry, President Donald Trump’s executive order ended the separations in June 2018. However, from the end of June through December last year, there have been at least 218 more separations, according to a Jan. 17 report from the Office of Inspector General in the Health and Human Services Department.

This report also revealed that there were “thousands” more migrant children separated from their parents than the government previously recorded, which signals that the full extent of the family separations under the Trump administration is larger than many believe.

To better understand why hundreds of immigrant children are still searching for their parents in the U.S., it’s helpful to examine the processes of implementation, identification and reunification under current Trump administration policy.

On April 6, 2018, then Attorney General Jeff Sessions issued a memo outlining the department’s new “zero tolerance” policy, which directed federal prosecutors to criminally charge adult migrants entering the U.S. illegally and border officials to separate them from any children they brought. Children cannot be held in immigration detention facilities with their parents because they are not referred for prosecution. Instead, they are held in separate child detention facilities.

A Houston Chronicle report contradicted Nielsen’s claim, even citing cases of family separation before Session’s April 2018 memo. The report found 22 cases from June to November 2017 of parents with no history of immigration violations who were prosecuted for the misdemeanor crime of improper entry and separated from their children.

Improper entry is defined as entering the country outside of established ports of entry as designated by U.S. immigration officers.

“It’s a very cruel irony that this policy is being enforced at points of entry where people are trying to seek asylum legally. If they cross between the points of entry they are not currently subject to this policy,” Kizuka said.

Facing mounting pressure from Congress and the public, Trump ended family separations under the administration’s “zero tolerance” policy on June 20, 2018 with an executive order.

“What we’ve relied on for the last couple of years has been a strategy of public pressure and that was what really forced this administration to back down from the child separation policy,” a Democratic Senate aide said.

A federal judge followed Trump’s move with a June 26 decision ordering the government to reunify all separated children and parents.

After Trump’s executive order and subsequent court order, the Office of Refugee Resettlement was responsible for coordinating the placement and care of unaccompanied immigrant children through its Unaccompanied Alien Children program. ORR does not apprehend migrants at the border or enforce U.S. immigration laws.

Jonathan White, former deputy director of ORR, claimed HHS worked closely with Homeland Security, Customs and Border Protection and Immigration and Customs Enforcement after the June 26 court order to identify all parents of children in ORR’s care who met the criteria for reunification.

White claimed that there were 2,816 children who qualified under court order to be identified and reunited with their parents, all of whom were able to be located by the UAC Portal case management system.

The Government Accountability Office released this chart which reveals the total number of children that ORR identified for potential reunification as of September 10. (G

However, a Government Accountability Office report from October revealed that the HHS did not have a consistent method of identifying separated children and their parents, which presented difficulties in reunifying families.

Prior to the court’s ruling, HHS had never been required to identify, categorize or track separated children entering ORR care for the purposes of reunification.

HHS had to additionally assess the health of the parent, determine the location of their apprehension and separation, and evaluate if reunification with the parents could present a danger to the child.

White said that HHS collected a wide variety of data sets from different agencies, including CBP and ICE, and the case management records for every child in ORR care as of June 26, 2018 to identify family matches.

But HHS was not obligated to identify children separated from their parents if the children were released by ORR to a sponsor or someone claiming to be their guardian, before the June 26 court order. Because of that, HHS officials estimated that thousands of additional children were separated by DHS, referred to ORR care, and released through standard ORR processes prior to that date, according to Ann Maxwell, assistant inspector general for HHS Evaluation and Inspections.

Maxwell added that incomplete information about separations that happened after Trump’s executive order and the court injunction hurt ORR’s ability to identify the remaining separated children for reunification.

“Separation is a possibility under exigent circumstances in order to protect the child and to ensure the wellbeing of the child and are not attributable to zero tolerance,” said a CBP official. The official added that these circumstances can include a parent who has a criminal history, outstanding criminal warrant, communicable disease, fraudulent claim of guardianship or drug smuggling charge.

After HHS identified the 2,816 children separated from their parents, the process of reunifying them began. 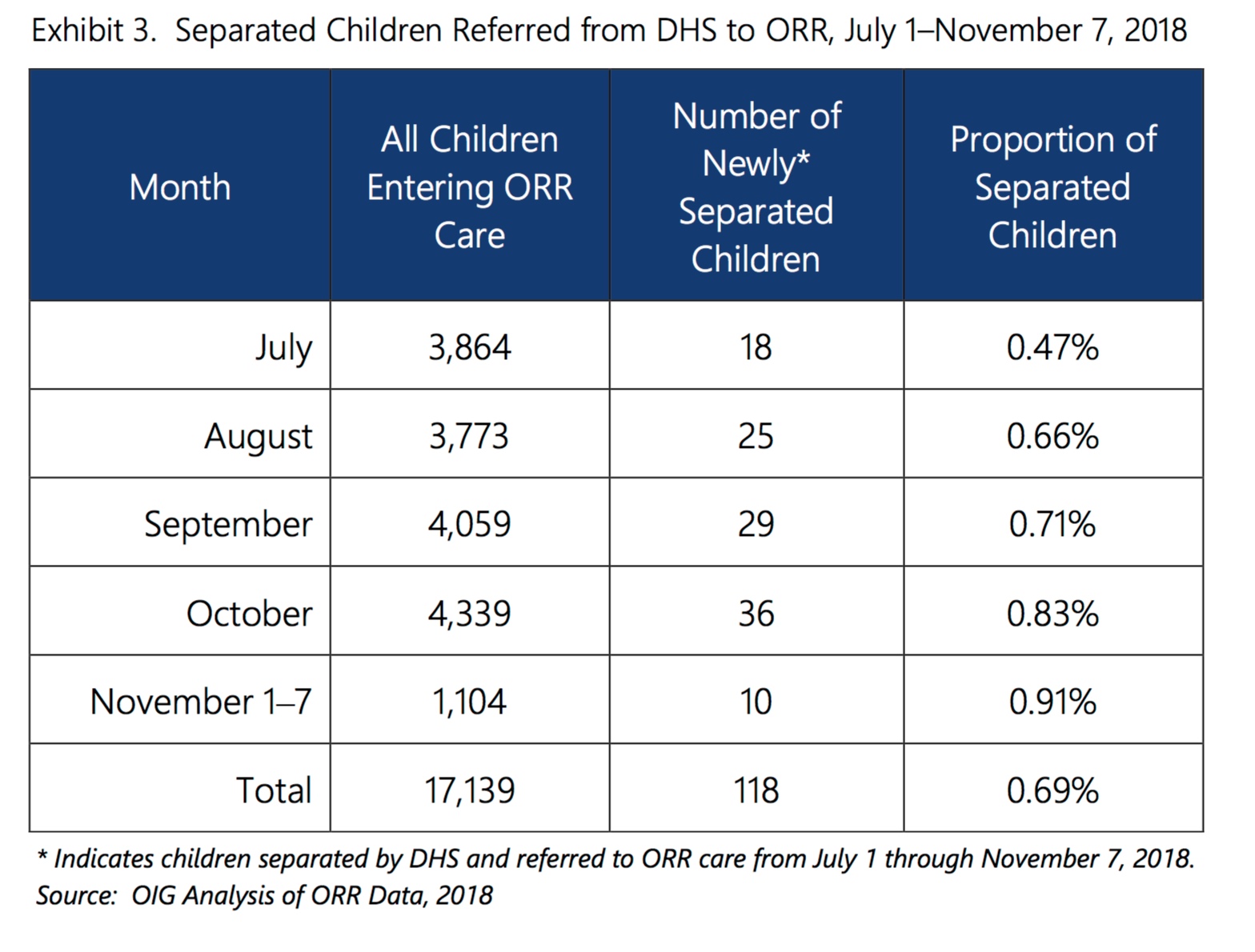 This chart from an HHS report indicates the number of migrant children referred to ORR by DHS from July 1 to Nov. 7, 2018.

In his ruling, Sabraw said families could be only separated under very limited circumstances in which a parent posed a danger to the child. However, Sabraw did not establish standards of oversight for this requirement.

As of Feb. 7, White said, 2,155 of the 2,816 children identified for reunification were with the parent from whom they were separated.

The remaining 661 children left ORR care through other appropriate discharges, remained in the U.S. with a sponsor or did not have parents who met the requirement for reunification.

The American Civil Liberties Union, which filed the federal class action lawsuit, is responsible for aiding the parents in the process of reunification with their children.

There are still reports of family separations at the U.S.-Mexico border, as ORR received at least 118 children separated by DHS from July 1 through Nov. 7, 2018 for reasons including a parent’s gang affiliation, illness or hospitalization, or immigration history.

The Justice Department told the ACLU that it isn’t obligated to report new separations because they are no longer done under the zero-tolerance policy. In some cases of family separations, DOJ would not specify certain crimes, nor the evidence, that migrant parents were suspected of committing.

As CBP stated previously, parents can be lawfully separated from their child if they pose a danger, which was supported by Sabraw’s court ruling.

However, Sabraw did not establish specific standards of oversight for this requirement.

As a result of this absence of oversight, immigration rights groups have claimed that border agents now have the authority to determine what classifies a parent as a danger to the child.
“In the U.S., lawful rights are always seen by a judicial process and that’s part of what’s been missing in this whole situation,” said Lee Goodman of the Shut Tornillo Down Coalition, which aims to end the children’s detention centers. “Border patrol agents, ICE officers and others have been allowed to operate without much oversight, particularly since the children don’t have representation.”

The coalition lobbied to shut down the child detention center in Tornillo, Texas, which closed in January.

Some migrant parents have filed lawsuits against the federal government for the damage that the separations caused them and their children, while lawmakers try pin down exactly how many children were separated before the DOJ’s April 2018 memo.

Nielsen is scheduled to testify before the House Homeland Security committee on March 6. Chairman Bennie Thompson of Mississippi will likely question Nielsen about the magnitude of the administration’s family separation policy.