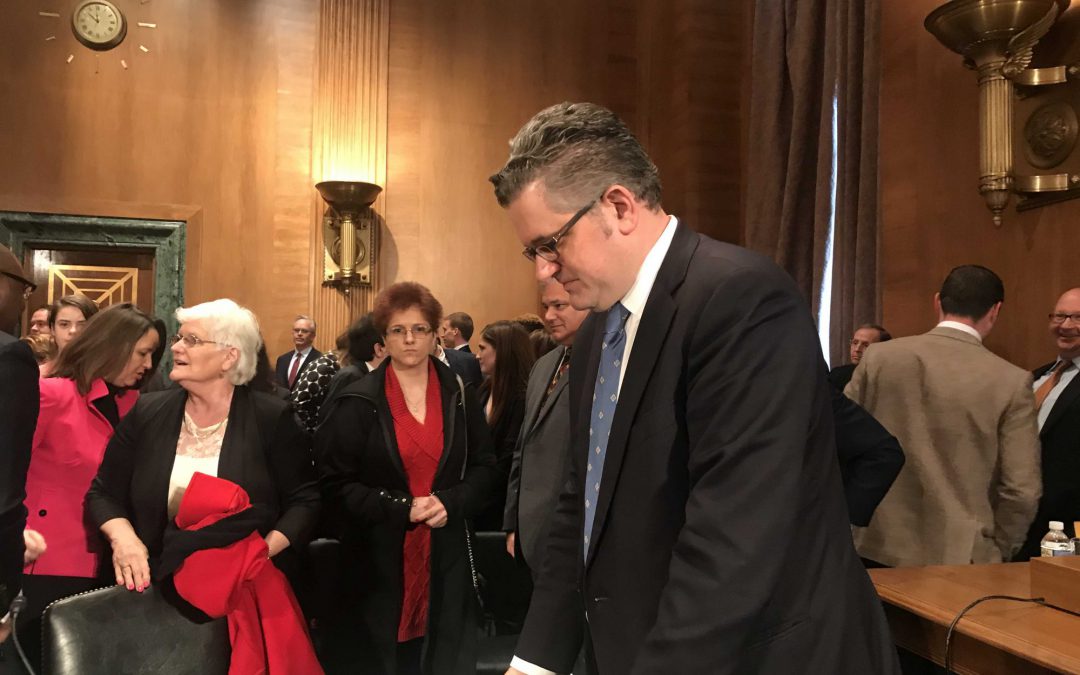 Speaking at a Senate Banking, Housing and Urban Affairs Committee hearing, Mark Calabria said that the 2008 bailouts of Fannie and Freddie “bred a lot of deep cynicism in the American public about our political and financial system.”

The finance agency itself was created by the Housing and Economic Recovery Act of 2008 to regulate Fannie and Freddie, the two government-sponsored enterprises, or GSEs. It also oversees the Federal Home Loan Bank System.

Calabria, the chief economist for Vice President Mike Pence, has come under heavy criticism from the left for blog posts on the libertarian Cato Institute website in which he argued against the federal control of Fannie and Freddie. He was director of financial regulation studies at Cato from 2009 to 2017.

Ranking member Sherrod Brown, D-Ohio, pushed Calabria about a post in which he labeled borrowers who’d defaulted “deadbeats.” Sen. Jon Tester, D-Mont., told Calabria that his writings on the causes of the 2008 crisis were “disturbing.”

When asked about his commitment to Fannie and Freddie, whose purpose he had questioned, Calabria said, “I’m very concerned about any large financial institution where we push it to take the additional risk without the appropriate regulatory structure in place.”

“All [of them] need to be well-capitalized, well-managed and well-regulated,” he said. “The GSE’s were none of the above before the [2008 financial] crisis.”

GSE critics have long considered Fannie Mae and Freddie Mac responsible for the 2008 recession. The organizations create a liquid secondary market in which financial institutions can sell mortgages they originate.

Committee Chairman Mike Crapo, R-Idaho, proposed a plan earlier this month that would privatize the organizations.

Miami University finance professor Andrea Heuson said in a phone call that when the GSEs were created and made federal, they worked as intermediaries.

“Lenders made loans, the GSEs were involved in the packaging of those loans. That worked beautifully,” she said. “Because they were intermediaries, the loans just passed through — they didn’t need a lot of capital.”

Before the housing boom, the GSEs turned themselves into investors.

“Once you invest in those assets,” said Heuson, “once values dropped, you don’t have capital.”

Though Heuson suggested returning the GSEs to their intermediary functions, Calabria said at the hearing that he supported “getting significantly more capital.”

However, he said that under the current terms, the agency director does not have the authority to increase the capital requirements for Fannie and Freddie past the current $3 billion. Getting the power to do so unilaterally would require an altered agreement.

Instead, to fix the two GSEs, Calabria said he wanted to regulate them in the same way that other financial institutions are. He spoke negatively of them being under federal control, in a status called a government conservatorship.

Calabria was also questioned on his commitment to the federal 30-year-fixed-rate mortgage, which he wrote was unneeded in a 2011 article. Fannie and Freddie buy the mortgages from lenders and make them more accessible through the GSEs’ roles as middlemen.

It isn’t known yet when or if Calabria will be confirmed. A spokesperson for the committee said information on the nomination could be available on the website next week. Calabria would replace acting Director Joseph Otting, a former banking industry executive who’s served in the role since January.