Regulators call for rules on Bitcoin, other virtual currencies 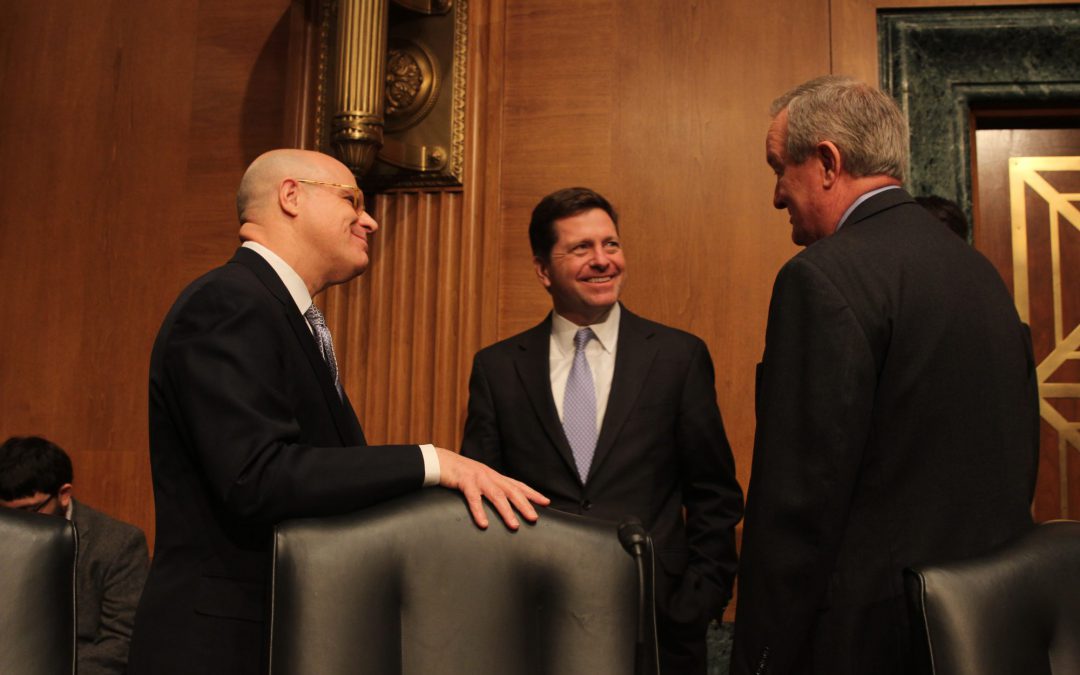 Chairman of the CFTC J. Christopher Giancarlo and Chairman of the SEC Jay Clayton prepare to testify before the Senate Banking, Housing and Urban Affairs committee. (Caroline Vakil/MNS)

WASHINGTON – Virtual currencies and the online platforms where they are traded must be regulated by the government, top financial regulators told lawmakers Tuesday.

Collective market capitalization of cryptocurrencies topped $700 billion last month, Clayton and Giancarlo said in a Wall Street Journal column in January. In December, the value of an individual bitcoin shot up to over $19,000. But the price has been gradually decreasing and yesterday the price had dropped to roughly $7,000, underscoring the cryptocurrency’s volatility.

“We should all come together and have a coordinated plan to deal with the virtual trading currency market,” said  Clayton. Clayton explained that there’s an assumption that “they are regulated in the same way a stock exchange is regulated and it’s far from that.”

Created in 2009, bitcoins allow people to buy things anonymously and are typically stored in a “digital wallet” ‒ either in a person’s computer or in the cloud.

With a lack of federal oversight, bitcoins have been traded over “bitcoin exchanges” like Coinbase and Bitstamp, which are not regulated like traditional security exchanges. It also means that bitcoin is more vulnerable to being stolen by online hackers.

Brown called the volatility of Bitcoin “remarkable”, and said its immense growth has “shown us the intersection of ingenuity and greed.” He expressed concern that when banks commit wrongdoing they simply pay a fine and avoid major punishments, a practice he fears may continue in the unregulated cryptocurrency network.

“I’m concerned it’s business as usual when it comes to violations of big banks through potential abuses in the virtual currency market,” he said.

The SEC and CFTC, in particular, are concerned about cryptocurrency regulation because some of the virtual currencies have characteristics similar to exchanges and contracts that the SEC and CFTC oversee. Initial coin offerings (ICOs) are an unregulated fundraising tool that companies use to raise money in the form of cryptocurrencies like Bitcoin. ICOs are similar to initial public offerings (IPOs), where investors buy company shares. While IPOs are regulated as securities by the SEC, ICOs are not.

The CFTC regulates futures and options markets. Futures contracts is an agreement on an exchange that an asset will be bought or sold a predetermined time in the future at a fixed price; options contracts is an agreement between a buyer and seller to give the purchase the option to buy or sell an asset at a predetermined time in the future with an agreed upon price. Because bitcoin acts like an asset, allowing an investor to buy or sell it, the CFTC also wants to regulate the cryptocurrency.

“When you have an unregulated exchange, the ability to manipulate prices goes up significantly,” Clayton said during his testimony. “An asset that’s highly volatile is not an effective means of exchange, you expose yourself to significant risk using it.”

Aswath Damodaran, professor of finance at New York University Stern School of Business, explained “there is going to be a digital currency because we live digitally” but that bitcoin’s volatility comes from the fact the first phase of market and technology disruption is always messy.

Sen. Mike Rounds (R-SD) asked Giancarlo if virtual currencies such as Bitcoin are currently being traded as commodities or securities, but Giancarlo said that characterizing bitcoin into one category proves to be a challenging task as it has characteristics of multiple different things.

“Bitcoin has been described as a medium of exchange, a store of value or a means of account ‒ and those three things have different connotations to them,” he said. “From the CFTC’s point of view, when it’s used as a store of value it’s very much an asset, like a commodity. The problem is we don’t have regulatory authority in the cash market, which means we can’t set the standards, but what we are doing is looking for fraud and manipulation, and we intend to be very aggressive.”

Giancarlo also discussed the measures that the CFTC is taking to protect investors from falling prey to fraudulent schemes.

“We hired our first Chief Innovation Officer, teamed up with the Consumer Financial Protection Bureau to educate consumers and created a virtual currency task force that has brought out three violations so far,” he said. “Word is getting out that we will go after misconduct, and I think you’re starting to see that reflecting in the price of bitcoin.”

Damodaran explained that SEC and CFTC can only educate individuals so much about the risks of trading bitcoin.

Chairman Clayton said that he is confident that the enforcement division at the SEC will “police securities laws vigorously” and put out warnings for investors looking to purchase virtual currencies. However, hiring enough qualified personnel is proving to be a big challenge for the agency.

“We have a hiring freeze at the moment, and could use more people working in enforcement and in trading and markets,” he said.

But that can’t be a task for U.S. regulators to tackle alone, Damodaran said, stressing that the challenge requires global coordination with international groups like central banks.