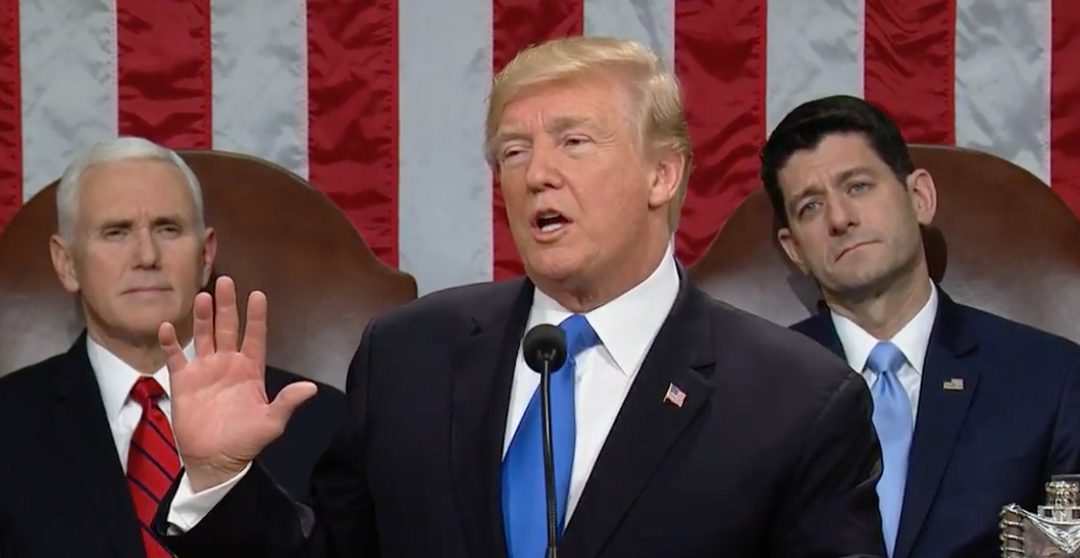 Keep up with #SOTU18 as reporters Anna Laffrey and Maggie Harden fact-check President Trump’s first State of the Union address in real time.

How did Trump do overall with accuracy? Politifact says several of his points were “fatally flawed” and the speech overall had “mixed accuracy,” and we agree. He correctly stated statistics regarding ISIS and drug overdose, but his points on tax and immigration reform were particularly misleading.

To continue following our SOTU coverage, stay tuned for stories like these: Anna Laffrey will be reporting on infrastructure, Catherine Kim and Kristina Karisch are compiling an infographic comparing this address to others, and other reporters will be gathering reactions from both sides of the aisle.

Trump finishes his first official State of the Union with some uplifting prose.

“Americans fill the world with art and  music. They push the bounds of science and discovery, and they forever remind us of what we should never never forget… There is nothing we cannot achieve as long as we have confidence in our values, faith in our citizens, and trust in our God.”

“No regime has oppressed its own citizens more totally or more brutally than the cruel dictatorship of North Korea.”

Trump says we are waging a campaign to prevent any nuclear aggression from North Korea. He says he will not repeat the mistakes of complacency and concession that have led to danger in the past. Trump was expected to go hard on North Korea, root for more defense spending.

@POTUS addresses ongoing threat of ISIS and terrorism, saying “Terrorists are not merely criminals. They are unlawful enemy combatants.” To applause from Republicans, he says he signed an order to keep open detention facilities at Guantánamo Bay.

President Trump said that the coalition to defeat ISIS has liberated almost 100 percent of territory.

FACT CHECK: This is true, although this trend did not start with Trump’s presidency and Syria is still currently undergoing a massive civil war.

President Trump said he wants to end the process of immigrants being able to bring in a “virtually unlimited number of distant relatives.”

FACT CHECK: Immigrants who are current U.S. citizens can only sponsor immediate family members, including parents, children, or spouses/fiancées. How many people they can sponsor depends on the U.S. citizen’s income and relationship to the incoming immigrant.

President Trump brought up how over 64,000 people died in 2016 from drug overdose.

FACT CHECK: This is true, and means that more Americans died of drug overdose in 2016 than died in the Vietnam War. More than 75 percent of these overdoses were opioid overdoses, which is an issue President Trump has declared a public health emergency but has done relatively little to combat.

He calls these four pillars a “down-the-middle compromise” that will create a  “safe, modern and lawful immigration system.”

“Tonight I am extending an open hand to work with members of both parties, Democrats and Republicans.”

Trump was expected to call on bipartisanship at the address. He said all Americans are “dreamers.”

“Open borders have allowed drugs and gangs to pour into our communities.”

He’s talking about the families of two young girls killed by MS-13 gang members. This has been one of Trump’s strategies since the early days of his campaign.

He laid out some minimum tools necessary: a billion trust fund for the border wall system; additional funds to hire new DHS and ICE personnel; ensuring the detention and removal of criminal aliens, gang members, violent offenders, and aggravated felons; among others action items.

POTUS: Open borders have “allowed millions of low-wage workers to compete for jobs and wages against the poorest Americans.”

FACT CHECK: According to the Pew Research Center, the U.S. workforce includes about 8 million undocumented immigrants. However, the U.S. does not have open borders.

"The era of economic surender is over."
~@POTUS

Trump says $ 1.5 trillion will be invested for a new infrastructure plan. This is different than what he told a group of the nation’s mayors last week – he first said $ 1 trillion, but said it would likely actually be a $ 1.7 trillion project.

“Any bill must also streamline the permitting and approval process, getting it down to no more than two years… Together we can reclaim our great building heritage.”

Trump: “It’s time to rebuild out crumbling infrastructure.” He says we build the Empire State building in a year, but it can take up to 10 years to get a permit for road construction to be approved.

He’ll calls on bipartisanship for a “safe, fast, reliable, and modern” infrastructure plan.

A budget proposal leaked to Axios last week sheds some light on what this plan might actually look like. Federal incentive grants should use up 50 percent of the allotted budget. 25 percent will be dedicated to rural issues, specialized for every community. There will also be funding meant specifically for “innovative or transformative” projects getting off the ground.

Trump said earlier in his speech that “millions of Americans will have more take-home pay starting next month.” Note that the Americans receiving the most increases in income, according to the Urban-Brookings Tax Policy Center, are the ones already in or above the ninetieth income percentile. 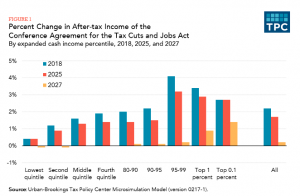 Some Dem members snickered after @POTUS said the past year has brought a government that represents more Americans.

Medill News Service reporters follow along from the chamber @medillonthehill

POTUS: Last year, the Federal Drug Administration approved more drugs than ever before in U.S. history.

This claim is true, with 46 new medicines receiving an approval from the FDA in 2017.

Trump said Alabama was chosen as the site of a new auto plant by Toyota and Mazda. That’s true — the two Japanese companies said the plant would open in 2021 and be capable of making 300,000 cars a year. It’ll cost $ 1.6 billion to build.

Trump announced that Chrysler will be moving a plant from Mexico to Michigan. However, CNN reports that Fiat Chrysler is not shutting down its plant in Saltillo, Mexico, but rather simply moving some operations to Warren, Michigan. In total, Fiat Chrysler has six plants in Mexico.

Trump: “We have ended the war on beautiful, clean coal.”

But, one of his nominees was withdrawn because he couldn’t answer basic legal questions. That was Matthew Spencer Petersen, who was up for a seat on the D.C. District Court.

There are currently 51 nominations to Article III courts awaiting Senate action, including 7 for the Courts of Appeals and 44 for the District Courts.

“In our drive to make Washington accountable, we have eliminated more regulations in our first year than any administration in history,” the president said during his address.

FACT CHECK: The Washington Post reports that, compared to his most recent predecessors on their first sweeps through regulations, he has cut the most out of Clinton, Bush or Obama. However, experts say the number of regulations withdrawn might not be the best metric, because those are rules that never went into effect to begin with. There are few other metrics that would really prove this, and so in reality it’s hard to tell, according to experts.

President Trump said earlier in his speech that wages are finally on the rise, after years of wage stagnation. Here’s a chart from the Federal Reserve Bank of Atlanta detailing the last twenty years of wage changes — note that they have been generally increasing since 2010 and started stagnating only beginning in 2017. 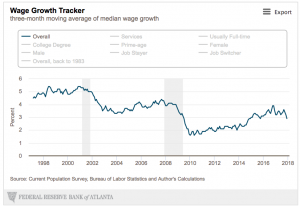 President Trump has said his recent tax overhaul is the biggest tax reform in American history.

President Trump said that his administration has created 2.5 million jobs since the election, and that the country is finally seeing wage rises after years of wage stagnation.

FACT CHECK: Approximately 2.5 million jobs have been created since Trump’s election (which notably includes the last three months of Obama’s presidency). However, as with any president, it takes at least several months for the economy to undergo change based on any policy.

Trump: “Since the election, we have created 2.4 million new jobs, including — including 200,000 new jobs in manufacturing alone. Tremendous.”

Does this apply to African Americans? Yes, black unemployment rate is currently 6.8%, the lowest in 45 years.

However, this trend started under Obama, and has not intensified under Trump. Black unemployment rate has been steadily falling since 2010.

President Donald Trump: “We have gone forward with a clear vision and a righteous mission. To make America great again, for all Americans.”

President Trump opened by speaking about the optimism the country has had since his last address to Congress, despite the fact that his approval rating (38 percent) has reached historic lows

SCOTUS is entering – only 4/9 justices are present.

Reporter Jakob Lazzaro tweeted that four of nine Supreme Court justices are present. Ginsburg, Kennedy and Sotomayor have prior engagements. Alito hasn’t been since Obama’s 2010 SOTU, where he was caught shaking his head. Thomas has called the speech a partisan event, and has no interest in attending.

Reporter Caroline Vakil is at The George Washington University watching the speech with a college republicans group. Here’s her preview about students and #SOTU.

College Republicans optimistic before Trump’s State of the Union address

The First Lady has also invited some public servants who responded to national crises this year.

We’re all watching the crowd this year, Maggie. We know the First Lady will bring special guests to the State of the Union, just like every year — usually symbolizing an ideal that is included in the president’s speech.

Police Officer Ryan Holets is among special guests seated with the First Lady this year. Holets adopted a baby from parents who were addicted to opioids, bridging between law enforcement and abusers.

Trump launched a commission to study the opioid epidemic, but has not allotted any additional funding since. Does this guest indicate some sort of action might be taken to address a drug influencing so many Americans?

In addition to ISIS, the president is expected to give a “forceful” warning to North Korea, according to reports from CNBC (perhaps he will echo earlier sentiments he made about the U.S. “nuclear button”).

Anna, can you tell us a little bit about which guests will be in attendance tonight? 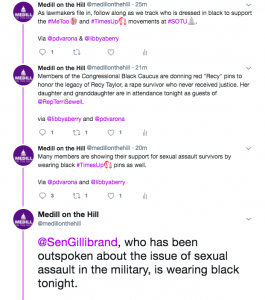 From our Twitter: Reporters Libby Berry and Paola Verona are on the Hill reporting on the members of Congress showing their support for sexual assault reporters and the #MeToo movement. You can follow this thread @medillonthehill

Trump is expected to tout efforts against ISIS, liberating regions of Iraq and Syria. Maggie, any other themes we should be expecting from the speech this year?

President Trump is expected to primarily focus on the benefits of his recent tax overhaul, immigration and infrastructure, according to expert predictions. Experts also raise questions of whether the president will be able to stick to his prepared remarks, which was something he was praised for at a joint address last year.

According to excerpts released by the White House, Trump will say “There has never been a better time to start living the American dream” and that “Together, we are building a SAFE, STRONG, and PROUD America.”

From the looks of the excerpts, Trump will tout economic growth and grapple for bipartisanship.

Trump’s been making impromptu edits to the speech today, and for the past few weeks, the White House said.