Calling for “New American Moment,” Trump reaches across the aisle 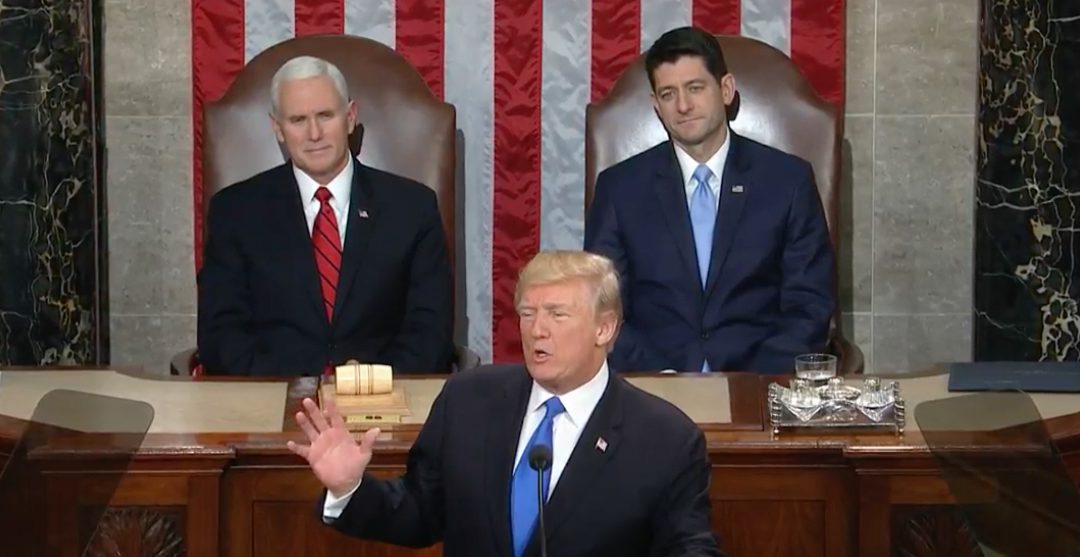 WASHINGTON — Facing political turmoil and historically low approval ratings, President Donald Trump stressed unity and bipartisanship in his first State of the Union address, appealing to  Americans’ sense of civic duty and proposing new infrastructure projects across the country. He appeared strident on some issues, calling to keep the Guantanamo prison open and warning that North Korean nuclear missiles could “very soon threaten our homeland,” but he extended an olive branch to his opponents on others.

Envisioning Americans “together, as one team, one people,” Trump also call on Democrats and Republicans to work together to pass immigration and infrastructure legislation.

“I am extending an open hand to work with members of both parties, Democrats and Republicans, to protect our citizens, of every background, color and creed,” he said.

No modern presidents have faced such political firestorm in their first year. In the month leading up to the historic address alone, Trump has come up against a government shutdown, a bestselling book allegedly exposing secrets of his administration, and a request by FBI Special Counsel Robert Mueller to interview the president. Trump’s approval rating sits at 39 percent, almost 10 points lower than Barack Obama and 41 points below George Bush at the one-year marks of their respective presidencies.

With Republicans in full control of the federal government, Trump noted the key wins his administration has notched — overhauling the tax code, rolling back regulations, the appointment of conservative Supreme Court justice Neil Gorsuch and twelve circuit court judges, a record for a first-year president.

In what was arguably his most-watched appearance of his presidency, Trump tried mightily to win bipartisan support on the Hill for proposals that will need it.

Referencing his immigration reform framework and border security, the president said he aims “to defend Americans … and their right to the American Dream.” The president outlined a four-pronged plan that would create a path to citizenship for nearly 2 million immigrants, some of which are enrolled in Deferred Action for Childhood Arrivals program, set to expire in March.

The plan also calls for $25 billion in federal funding for a border wall and significant changes to legal immigration programs. Trump called the proposal a “fair compromise,” where neither party gets “everything they want, but where “our country gets the critical reforms it needs.”

Speaking to reporters after the speech, moderate Rep. Charlie Dent (R-PA), said Trump’s principles for immigration lay the foundation for a fruitful negotiation. Dent said Trump was right in talking about “legalization and ultimately citizenship for the ‘dreamer’ population.”

“I believe that there is a bipartisan path forward on immigration and border security,” he added.

“To all the Dreamers watching tonight, let me be absolutely clear,” he said. “We will fight for you.”

Infrastructure is an area where Trump may have a better chance at gaining bipartisan support. He promoted his $1.5 trillion infrastructure improvement plan, saying it’s time to “rebuild our crumbling infrastructure.” Trump said he is asking both parties to join together “to give us the safe, fast, reliable and modern infrastructure our economy needs and our people deserve.”

The plan to repair roads, bridges and transit systems allocates 25 percent of the anticipated $200 billion to rural infrastructure grants that have no federal requirements, allowing state and local governments to decide how best to use the money. The plan also requires that no individual state can receive more than 10 percent of the amount available.

“We will do it with American heart, American hands and American grit,” he said.

Before laying out his proposals on immigration, infrastructure and the military, Trump claimed credit for a robust economy. He touted high wages for workers and a relatively low unemployment rate, citing the 2.4 million new jobs generated since his election.

“Since we passed tax cuts, roughly 3 million workers have already gotten tax cut bonuses – many of them thousands of dollars per worker,” he added.

The president’s critics and supporters dispute how much credit he deserves for the country’s economic growth over the past year. Trump said unemployment claims have reached a 45-year low, but the declines in these rates continue a long downward trend that began before Trump’s presidency.

The speech was particularly light on environmental issues and climate change, although he did claim to have “ended the war on American energy” and “the war on beautiful, clean coal.”

President Trump also pointed to his next big economic push — trade. Last week, he spoke at the World Economic Forum in Davos, Switzerland, encouraging foreign companies to invest in America.

“America first is not America alone,” he told the crowd.

But in the House chamber, Trump embraced his protectionist roots, blasting “unfair trade deals that sacrificed our prosperity and shipped away our companies, our jobs and our nation’s wealth.”

On defense, the president claimed that “rivals” like China and Russia challenge not only the U.S. economy but also American values. He said the country must be prepared to confront “rogue regimes” and terrorist groups, which begins with Congress’ full funding of the military and modernization of the country’s nuclear arsenal.

“Past experience has taught us that complacency and concessions only invite aggression and provocation,” he said. “I will not repeat the mistakes of the past Administrations that got us into this dangerous position.”

What little comity the speech might have engendered will be likely short lived. Even in the hours preceding the speech itself, controversy raged over the Justice Department’s Russia investigation. The president’s attorneys argued that special counsel Robert Mueller’s team does not have sufficient cause to interview a sitting president face to face.