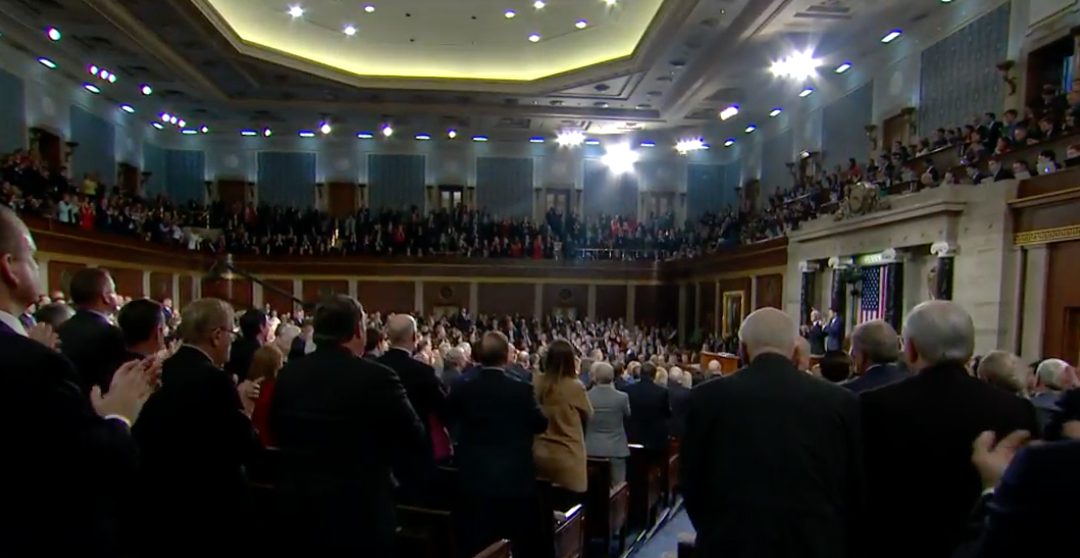 WASHINGTON — During his first State of the Union address, several of President Donald Trump’s remarks Tuesday were met with silence or lukewarm applause from Democrats. None of them appeared to divide the House chamber more, though, than his immigration reform package.

As expected, Trump called for bipartisan support of a four-pronged immigration proposal the White House unveiled last week. While Republicans on one side of the floor cheered on Trump’s speech, many Democrats booed and at one instance screamed “lies!” as he urged Congress to end chain migration.

After Trump presented his proposal to allow 1.8 million “dreamers” to get citizenship after 12 years, to fund a border wall, end the visa lottery and eliminate chain migration – allowing immigrants to bring family members into the country more easily – except for immediate family, he called his reform a “down-the-middle compromise,” a phrase that caused several Democrats to laugh loudly.

“For over 30 years, Washington has tried and failed to solve this problem,” Trump said. “This Congress can be the one that finally makes it happen. Most importantly, these four pillars will produce legislation that fulfills my ironclad pledge to sign a bill that puts America first.”

Eskinder Negash, acting chief executive officer of the U.S. Committee for Refugees and Immigrants, said he hopes both parties will come to an agreement.

“The devil is in the details in those kind of things,” he said. “But this is very much the proposal that everyone has been talking about.”

The chamber was packed with “dreamers” who were invited by members of Congress, among them Democratic Sens. Dick Durbin and Kamala Harris, and House Minority Leader Nancy Pelosi. The young adults, who were brought into the country illegally as children, have temporary visas that begin expiring in March, after Trump ended the Obama administration’s Deferred Action for Childhood Arrivals program.

A number of lawmakers wore butterfly pins in support of the dreamers.

In contrast, guests in the first lady’s box highlighted the need for border security and protection against gang violence. Melania Trump stood by the families of victims most likely killed by MS-13 gang members, along with Agent C.J. Martinez, a supervisory special agent for the U.S. Immigration and Customs Enforcement’s Homeland Security Investigations unit, whose work has led to more than 100 arrests of these gang members.

The new immigration proposal Trump stressed in his speech would grant citizenship to 1.8 million undocumented people brought into the U.S. as children, more than the Obama administration’s DACA order protected. However, the proposal also intends $25 billion for increased border security.

Durbin and Sen. Lindsey Graham, R-S.C., previously led a bipartisan immigration proposal in the Senate, which was rejected by Trump and declared dead by GOP leaders.

Stacie Blake, director of government and community relations at the U.S. Committee for Refugees and Immigrants, said Trump has supported resolving the partisan fight over DACA in the past.

Nonetheless, Trump has held a firm position on border security since his campaign trail days. His hallmark promise to build a wall on the U.S.-Mexico border has divided Congress. His signing of the travel ban, an executive order barring citizens of seven Muslim-majority countries from entering the U.S., just a week after Inauguration caused national uproar. A year later, partisan conflict over immigration resulted in a three-day government shutdown as Democrats initially refused to pass a federal spending bill without a DACA deal.

“What we see as a result of these acts is separated families and so much uncertainty and fear for folks who are either waiting to come … but now find themselves in limbo, or people who are here awaiting family reunification,” Blake said. “The impacts are direct and real on individuals and families.”

Some of the president’s more incendiary remarks have sparked divisive responses from various immigration groups. Over the year, Trump has accused Mexicans of bringing drugs and crime, and has reportedly called Haiti and African nations “shithole countries.” He also called for more than 200,000 El Salvadorans to leave the U.S.

Marguerite Telford, communications director of the Center for Immigration Studies, a group that presses for less immigration, said Trump’s comments are only “a teeny tiny part [that shadow] his accomplishments.”

“This is the White House plan. … Build a big, stupid, wasteful and insulting border wall, paid for by American taxpayers and not Mexico, so that Trump and his followers can extend the middle finger to Latin America,” Sharry said.

Despite the dissenting response on immigration, Trump pressed Congress to come to a fruitful solution and protect both dreamers and the nation’s borders.

“Let’s come together, put politics aside, and finally get the job done,” Trump said.