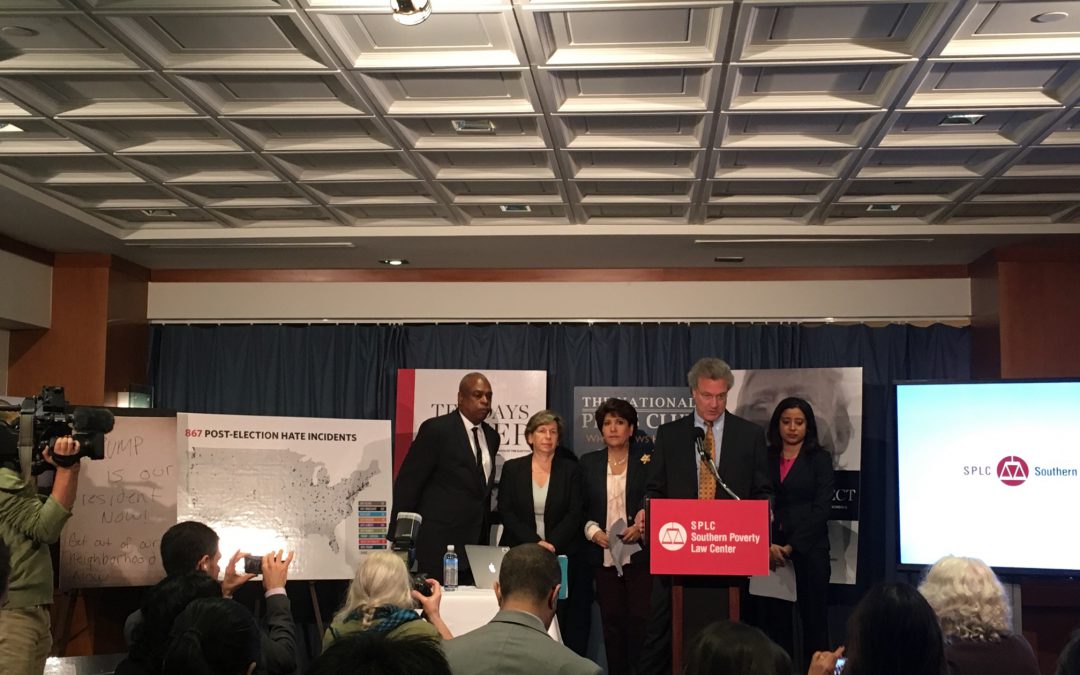 WASHINGTON — The Southern Poverty Law Center recorded more than 860 bias-related incidents nationwide in the 10 days following the presidential election, according to a report released Tuesday by the legal advocacy group.

The SPLC, an organization which tracks hate crimes and other instances of discrimination, said the 867 incidents ranged from offensive speech to violence after the election of Republican Donald Trump.

The incidents were reported either to the SPLC directly or chronicled through news reports, the group said. Online harassment and events discredited by authorities were not included, but the veracity of all reports could not be confirmed, according to the report.

On Nov. 18, 10 days after the election, Attorney General Loretta Lynch said in a video statement that reported hate crimes spiked by 6 percent in 2015, and by 67 percent in instances directed specifically toward Muslim Americans. She urged victims of hate incidents that occurred in the wake of the election to report them to authorities.

SPLC President Richard Cohen said at a news conference that the catalogued incidents were likely a “tremendous, tremendous undercount.”

Not all incidents were linked to Trump, Cohen said, but many invoked his “name, slogan or words.”

“The level of hate that’s been unleashed by the election … is something entirely new,” Cohen said. “[Trump’s] been singing the white supremacist song since he came down that escalator and announced his candidacy.

Cohen, along with leaders of civil rights groups and union organizations, called on Trump to disavow hateful incidents carried out in his name. When previously questioned on the issue, Trump has said he condemns such acts.

Janet Murguia, president of Latino advocacy organization National Council of La Raza, said Trump’s statements in interviews did not suffice and called on him to reach out to “marginalized communities.”

“While he has said he wants to be the president for all Americans, we have heard precious little of what is going on in his name,” Murguia said.

In an additional report released Tuesday by the SPLC, the organization said it surveyed more than 10,000 educators since the election, 90 percent of whom reported that their school climate had been negatively impacted since the election.

Randi Weingarten, president of the American Federation of Teachers, said reports of bullying and intolerance in schools have increased since Trump’s election. She said he refuses to “speak up for the littlest guys — our children.”

“The President-elect knows how to use his voice,” Weingarten said. “He’s done so to denounce a Broadway show, to denounce media personalities, but his lack of leadership here… is deafening.”

Wade Henderson, president of the Leadership Conference on Civil and Human Rights, said he believed most Trump supporters were not intolerant, and that progress could be made if the president-elect commits himself to the cause.