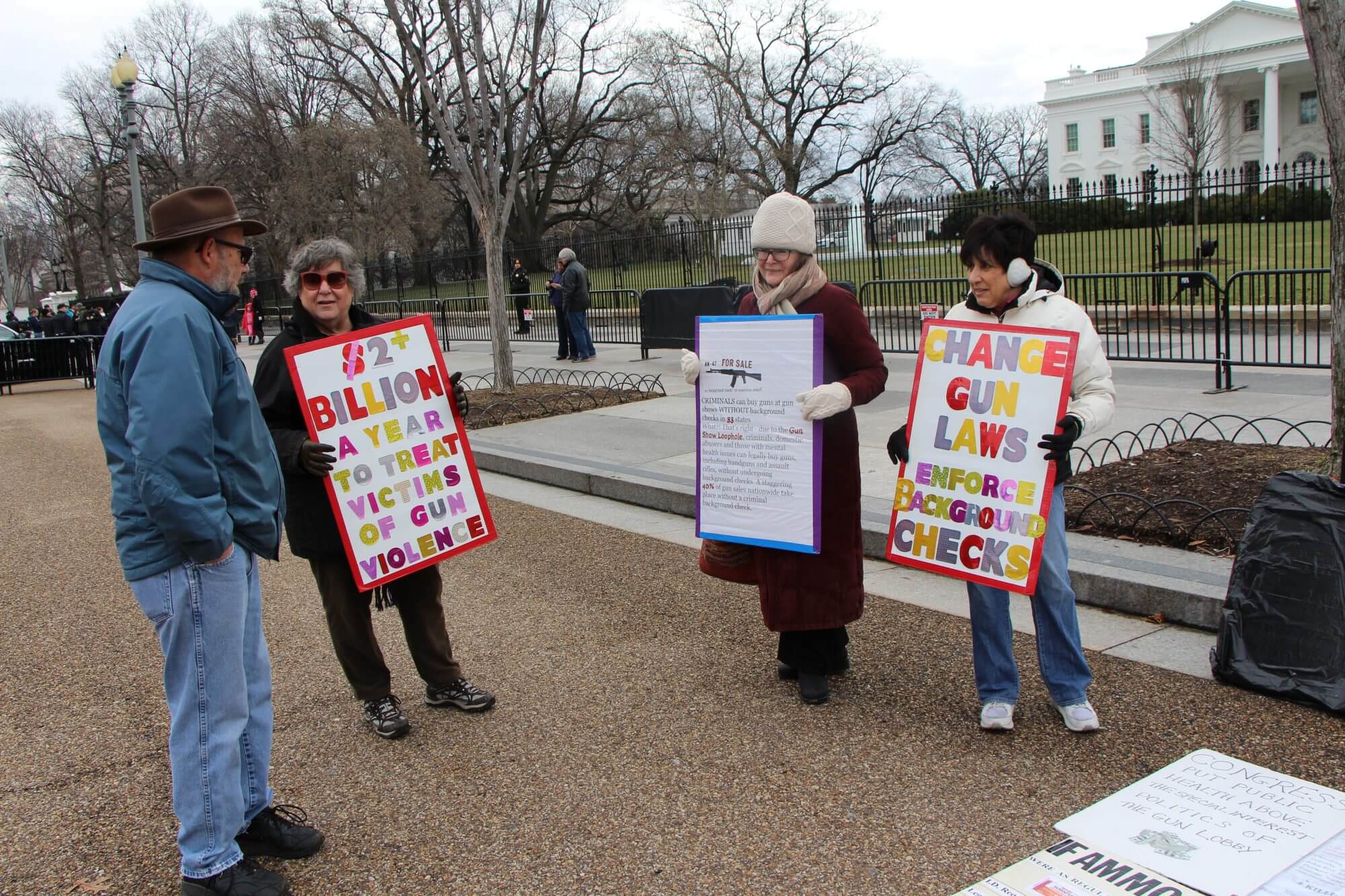 Protesters with We The People for Sensible Gun Laws demonstrate in front of the White House. "I’ve not personally experienced gun violence, but after the Aurora Theater shooting, myself and two other women decided we just needed to do something," said Linda Finkel-Talvadkar (white coat). (MNS)

Protesters with We The People for Sensible Gun Laws demonstrate in front of the White House. “I’ve not personally experienced gun violence, but after the Aurora Theater shooting, myself and two other women decided we just needed to do something,” said Linda Finkel-Talvadkar, in white. (Madeline Fox/MNS)

WASHINGTON – A group of nine protesters decided to honor Martin Luther King Jr.’s memory in the same way they spend every Monday—demonstrating for more restrictive gun control laws in front of the White House.

Linda Finkel-Talvadkar, who started the protest group, We The People For Sensible Gun Laws, in July of 2012, identified Dr. King as one of the early victims of a wave of gun violence in the U.S. that she dated to the assassination of President John F. Kennedy in 1963.

“We have to honor them and their sacrifices, especially Martin Luther King,” Finkel-Talvadkar said on the holiday dedicated to the memory of the civil rights leader. “Martin Luther King believed in nonviolence and that it’s only though peace that change can come about.”

The group, formed in the wake of the 2012 shooting at Aurora Theater in Colorado, assembles on Pennsylvania Avenue with about ten demonstrators every week, said protester and former schoolteacher Jan Fenty.

The White House demonstrators’ are not optimistic about the 114th Congress’ willingness to pass similar legislation.

“I don’t expect much coming from this Congress,” Finkel-Talvadkar, 63, said. “That’s not OK, but we will persevere. I think inherently, a lot of congresspeople are for common sense gun laws, but given the pressure or the desire to not be ‘primaried’ out, they choose not to voice their opinions.”

Fenty, 70, added that while the new Congress may not pass gun control laws advocated by the demonstrators, there is still cause for hope.

“Things can change,” said Fenty, a Washingtonian. “People say it’s never going to happen, but we say, years ago with the tobacco lobby we never thought we’d see all the restrictions on cigarettes that we do, so we just have to keep doing this.”

The Newtown Action Alliance, a grassroots organization for “smarter, safer gun laws,” formed in the wake of the shootings at Sandy Hook Elementary in Newtown, Conn. It is one of many groups working to push more restrictive gun control through Congress.

“We’ve been working to change the conversation which will ultimately change the culture and change the laws,” said Po Murray, chairwoman of the alliance. “We want to make sure that we keep guns away from dangerous people.”

One person hoping to bring about this change is Rep. Robin Kelly, D-Ill., who introduced the Keeping Guns from High-Risk Individuals Act  on Jan. 8. The bill would clarify and strengthen existing law prohibiting the distribution of firearms to certain classes of high-risk individuals such as individuals convicted of a felony. The National Rifle Association’s Institute for Legislative Action, the NRA’s lobbying arm. ,   opposes many of the restrictions advocated by gun control groups, including bans on assault weapons and high-capacity magazines and more extensive state and federal level background checks to cover sales at gun shows.  The NRA and other gun rights groups cite the Second Amendment to the Constitution as protecting the individual right to bear arms.