Attack of the drones: the hidden dangers of more unmanned aircraft 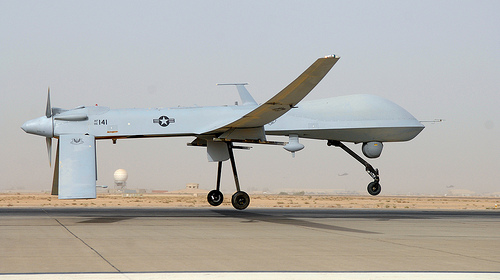 WASHINGTON – The September attack in Yemen that used Predator drones to kill al-Qaida leader Anwar al-Awlaki was the latest high-profile strike showing that future wars could be remote-controlled.

The key to the airstrike wasn’t the Hellfire missiles that took out Awlaki or the Predators’ stealth capabilities. It was the real-time data gathered by the drones’ high-tech sensors – and the 60 military personnel analyzing it.

Unmanned aerial vehicles – UAVs – are the Pentagon’s relatively cheap, precise and safe weapons system of the future. But the amount of information a UAV gathers and transmits can be too much of a good thing. It not only costs billions to gather and creates security risks by stretching military communications systems thin, but it also increasingly strains human pilots’ ability to keep up with all the data.

A 2010 analysis by the New York Times estimated that drones over Afghanistan and Iraq took 24 years’ worth of video footage in 2009 alone. That number is expected to increase by a factor of 30 in two years.

Oct. 30, 2006 – Supposed Taliban training camp in northern Pakistan is just a madrasa, and a strike kills 82. At least 69 victims identified as children.

May 21, 2010 – Al-Qaida’s third in command and CFO both die in strike in northwestern Pakistan.

All data transmission – including that on personal computers – requires a certain amount of bandwidth. And as the amount of information collected by drones skyrockets, the Pentagon must address both whether it has enough secure avenues through which data can flow and if there are sufficient operators to direct traffic.

A hidden, but growing, cost

The deluge of UAV information has proven too much for the military’s in-house communications systems. In 2009, the Pentagon scrapped a $12 billion satellite program that was under construction and would have  transmitted information around the globe through high-speed laser beams.

Instead, the Defense Department has increasingly turned to the private sector for its bandwidth needs, said Bill Ostrove, an aerospace analyst for the defense consulting firm Forecast International. The Pentagon expects to pay commercial providers about $500 million per year over the next decade in its new bandwidth acquisition plan, fulfilling about 80 percent of its communication needs.

In 2000, the military spent less than $100 million on commercial satellite space, according to the National Security Telecommunications Advisory Committee.

The conflicts in Iraq and Afghanistan forced the military to “scramble to get as much bandwidth as possible,” Ostrove said, to avoid severely limiting both UAV and ground operations.

The proportion of robots in the military’s air fleet grew from 5 percent to 31 percent between 2005 and 2010, according to a January Congressional Research Service report.

During that time, the Defense Information Systems Agency reported the military had increased its bandwidth by 1,100 percent. The price for each unit of information capacity, meanwhile, rose about 30 percent, according to a 2011 Government Accountability Office report.

Increasing costs are due both to demand created from more drone use and because U.S. forces are concentrated in developing areas between North Africa and Afghanistan.

“Part of the problem now is that in a lot of these regions…you have increased demand for commercial bandwidth as well,” Ostrove said. “There’s less supply going around so prices are going up.”

Todd Harrison, a senior fellow at the Center for Strategic and Budgetary Assessments, said demand is so high in the regions that the Department of Defense vies directly with Internet and cable providers.

“In many cases they’re going to be competing, literally, for the same space on the same satellite,” Harrison said. “That’s a trend that’s only going to continue to grow in the future because DoD just can’t build and launch satellites fast enough to keep up with the demand.”

A different type of threat

The military’s information needs have soared as more UAVs have taken flight. One Global Hawk drone, wrote the CRS, requires five times more bandwidth than the U.S. military used in the 1991 Gulf War.

In an era of shrinking defense budgets, the growing cost of bandwidth will squeeze funding from other military programs. Many satellite systems, Harrison said, are already oversubscribed.

But the lack of available commercial bandwidth isn’t the only threat to UAV use.

“Many of these commercial satellites can downlink to ground stations that are in other countries,” Harrison said. “And we don’t necessarily have control of where that data is going when it hits the ground or who has access to the facilities. And we don’t have control over who else is using the same satellite at the same time.”

In addition to an initial security evaluation by the agency, companies must complete training programs to familiarize themselves with security protocol and benchmarks for encryption codes and satellite infrastructure, Edwards said.

“It’s not only the initial process where the vendors had to demonstrate an understanding of what those requirements were,” he said. “But it is, in fact, an ongoing process throughout the contract.”

Keeping up with the machines

Concerns for future UAV use, however, aren’t limited to bandwidth and its security. An “unmanned” predator drone already requires more than 100 people for flight – more than 60 of whom analyze real-time data and video footage.

CLICK FOR LARGER IMAGE: A year-by-year look at drone casualties in Pakistan, where 90 percent of the past decade's drone strikes have occurred. Source: Bureau of Investigative Journalism (David Uberti/Medill)

The mountain of information will only grow as the Pentagon upgrades its drone fleet. The military has already begun to phase out Predators in favor of Reapers, according to its 2012 procurement plan, meaning that operators will fly UAVs that are bigger, faster and equipped with more high-tech sensors than ever before.

The military has already hinted at concern regarding the growing gap between UAVs’ computing capacity and operators’ ability to sort through it.

While it’s widely expected the military will give drones increasing autonomy in picking and engaging targets, a 2010 Air Force report proposed another solution: Using drugs or implants to help human operators keep up.

Closer integration of UAVs and their operators will be crucial, the Air Force wrote, while “augmentation of human performance will become possible and essential.”

“Augmentation may come…via drugs or implants to improve memory, alertness, cognition, or visual/aural acuity,” it said.

But while operator “augmentation” is likely, it shouldn’t be expected any time soon, according to Peter Singer, a senior foreign policy fellow at the Brookings Institution. The military’s more immediate plan is to give the machines more autonomy, he said.

“The plan moving forward is to have more [artificial intelligence] and distribute it across the system,” Singer wrote in an email. “[Expect] not just planes that fly themselves, but smart sensors that make sense of what they are seeing and only report back what is important.”

Despite UAVs’ increasing ability to make judgments on their own, their precision remains a hot-button issue for critics. A report by the British Bureau of Investigative Journalism concluded U.S. drone strikes killed more than 2000 people between 2004 and 2011. The proportion of civilian deaths, meanwhile, is highly disputed.

Still, the Pentagon insists drones’ accuracy is one of their greatest strengths – as seen in September’s strike that took out Awlaki and three militants in Yemen.

Reinforcing that strength “all comes down to connectivity” between UAVs and their operators, said Col. Eric Mathewson, director of the Air Force’s Unmanned Aircraft Systems Task Force.

“That connectivity allows you to always get back in control,” he said in 2009. “There’s nothing unmanned about unmanned aircraft, and that can never change.”