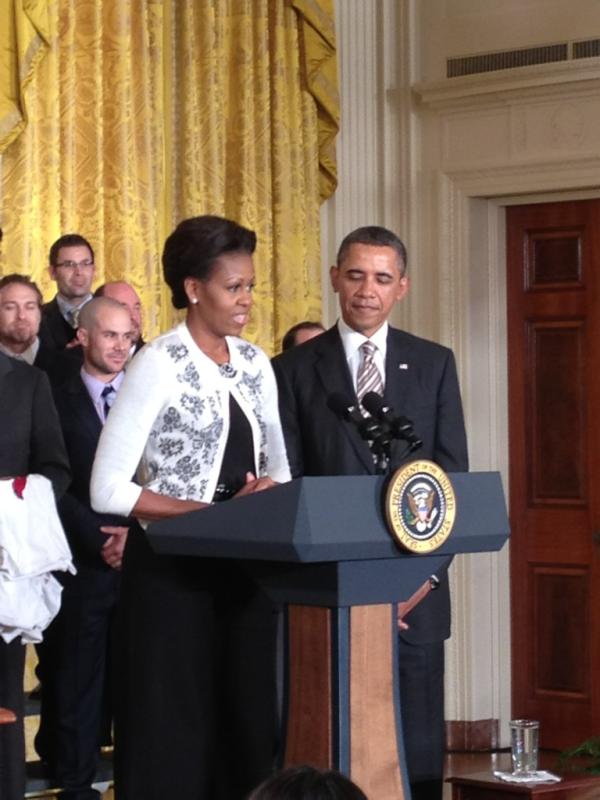 WASHINGTON – President Barack Obama didn’t hold back in praising the 2011 World Series champion St. Louis Cardinals: “Over 200,000 games have been played…17,000 players have gone through the league. This is a sport that has seen it all…It is my pleasure to stand here with the greatest comeback team in the history of baseball.”

Even given the unprecedented and improbable nature of the Cardinals World Series victory, the team followed a precedent set by numerous championship teams – visiting the president in the White House on Tuesday to commemorate the historic title.

The majority of the team was in the East Room, according to the St. Louis Post-Dispatch. The most notable absences were Albert Pujols, who is no longer with the Cardinals and also declined the invitation following the Cardinals 2006 title. Recently retired Manager Tony La Russa also missed the event.

The event began with a speech by first lady Michelle Obama, who was celebrating her 48th birthday. Mrs. Obama spoke not of baseball, but instead thanked the Cardinals for their support of the Wounded Soldiers Initiative. Several wounded veterans were in attendance at the event.

“Together we’re showing it doesn’t matter who you are, whether you’re a Cardinal or a Cubs fan…we all can find a way to give something back to our troops and veterans who have given us so much,” she said.

When it was his turn, Obama spoke of the determination and will of the Cardinals on the field. The team sneaked into the playoffs, gaining a wild card berth with a victory on the final night of the regular season, and at one point, “in Las Vegas they were 500 to 1 long shots to win the World Series,” Obama said.

“Of course, the most memorable moment was game six of the World Series. I’ve got to say that has to be one of the best baseball games of all time,” he added to rousing applause from the nearly 200 people in attendance.

Despite the strong praise Obama gave the Cardinals for their actions both on and off the field, the president didn’t miss an opportunity to mention his hometown team, the Chicago White Sox.

“I won’t lie, I’m a little disappointed I had to leave my White Sox jacket in the closet for another year,” he said. President Obama also pointed out that Cardinals Manager Tony La Russa began with the White Sox, which prompted Mrs. Obama to tell him “Let it go.”

Following his speech, President and Mrs. Obama were each presented with Cardinals jerseys bearing the number 44, in honor of the fact that Obama is the 44th president of the United States, and Mrs. Obama was given a commemorative baseball bat, although the president said he was “kind of worried about giving my wife a bat.”