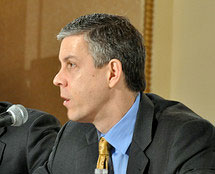 WASHINGTON–Education Secretary Arne Duncan pitched the administration’s 2012 education budget request to a roomful of mayors from around the nation Wednesday, emphasizing how increased funding for early childhood and adult education will address the concerns of urban areas from Fresno, Calif. to Southfield, Mich.

The administration’s “cradle to career” focus will help mayors tackle the daunting task of closing the achievement gap, Duncan told the attendees at the U.S. Conference of Mayors Work and Opportunity Summit.

“Using your bully pulpit and your moral authority to drive real change is challenging,” Duncan said. “It’s not something every mayor wants to do. [But] having the courage to challenge the status quo with things not working is important.”

Seventy-five percent of U.S. dropouts are students of color, Duncan said. Changing that statistic will require intervention at every level, from improving urban preschools to expanding job-training opportunities.

The Obama administration hopes to increase total education spending by $2 billion next year, according to a budget proposal Duncan released Feb. 14 at a Baltimore public school. That figure includes $350 million for a fund to raise the quality of early learning programs and $635 million for adult education grants.

Financial investment alone will not be enough to eliminate the nation’s dropout factories, Duncan said. He called on the mayors to rally their communities behind the administration’s goals and help schools communicate with the parents of at-risk students.

“Is that principal willing to go knock on doors?” Duncan asked. ‘Where that happens, I think parents will be engaged.”

In response to a plan by Wisconsin’s governor to strip labor unions of their collective bargaining rights, which led thousands of the state’s teachers to call in “sick” and protest at the state capitol last week, Duncan also touched on the role unions can play in improving education. Stripping them of their power would not make sense, he said.

“Everyone has to move outside their comfort zones—school boards, unions,” Duncan said. “It’s not a time to point fingers and lay blame.”