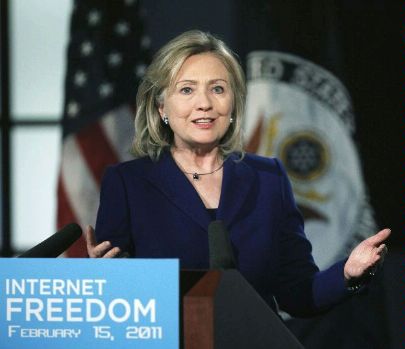 WASHINGTON — Secretary of State Hillary Clinton said Tuesday that the U.S. continues to support the protection of such basic human rights as speech and assembly, whether online or off.

However, Clinton did not say if the ability to access the Internet at all was a right, or whether the U.S. would protect it.

Outlining the new U.S. policy on Internet Freedom at George Washington University, Clinton pointed out that two billion people are connected to the Internet around the world today, with five billion more due in the next 20 years.

“The Internet has become the public space of the 21st Century – the world’s town square, classroom, marketplace, coffeehouse and night club ,” Clinton said. “We all shape and are shaped by what happens there, all two billion of us and counting.”

The U.S. wants that number to keep growing, she said, and as it does the same rights that would apply to any public space—rights such as assembly and association—are also applicable to the Internet. Clinton called it the “freedom to connect.”

Questions regarding Internet rights have arisen in the wake of protests throughout the Middle East. In Tunisia and Egypt, protesters employed social media tools such as Twitter, Facebook and YouTube to broadcast their messages worldwide, eventually forcing the displacement of two longtime leaders.

Days into the massive anti-government protests in Cairo, Egyptian President Hosni Mubarak shut down Internet access, causing a media blackout across the country. Thousands in Egypt were forced to use a call-in Twitter transcription service to continue reporting the events.

Aside from rights protecting online conduct, the blackout raised the question of whether people had a right to access.

Clinton said the U.S. cannot demand that governments provide Internet access for their people, but it is willing to work to help reformers get around state barriers to promote democracy and human rights online. She said its role as a public space for political discourse must be defended.

“There is no silver bullet in the struggle against Internet repression,” Clinton said. “There’s no ‘app’ for that. And accordingly, we are taking a comprehensive and innovative approach — one that matches our diplomacy with technology, secure distribution networks for tools, and direct support for those on the front lines.”

Ultimately, she said walls dividing the Internet and prohibiting speech are far easier to erect than to maintain, and entail a variety of costs.

“Countries may be able to absorb these costs for a time, but we believe they are unsustainable in the long run,” Clinton said. “There are opportunity costs for trying to be open for business, but closed for free expression.”

“History has shown us that repression often sows the seeds for revolution down the road,” she added. “Those who clamp down on Internet freedom may be able to hold back the full impact of their people’s yearnings for a while, but not forever.”

Clinton’s speech, which was billed as a major policy statement by the administration, was a follow-up to one she made a year ago in which she acknowledged that the Internet could be used both by reformers trying to dislodge repressive regimes and rulers trying to root out dissent.

But efforts have been stalled — and Congress has been pushing hard on the administration to unveil a new plan.

Clinton said the State Department would award more than $25 million in new funding for the fight against internet repression this year, in addition to the $20 million it has appropriated over the last three years.

She also announced that Christopher Painter, formerly director of cybersecurity at the National Security Council, will head a new initiative charged with uniting different segments of the State Department working on digital matters.