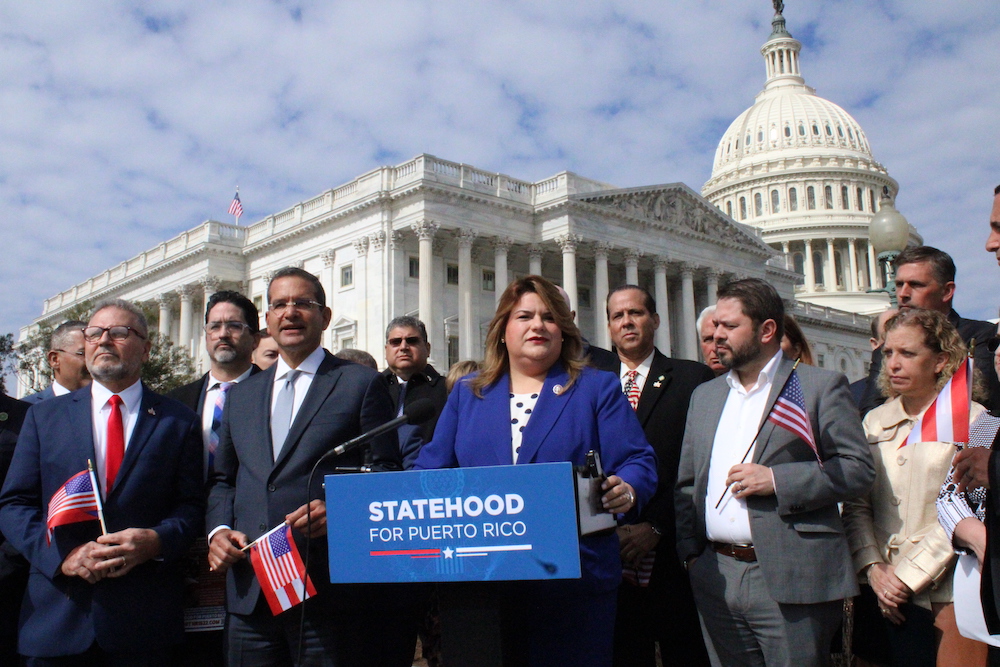 It began with Missouri and Maine back in 1890.

It ended in 1959, when Democrats pressured Republican President Eisenhower to grant statehood to Alaska if he hoped to make Hawaii the 50th state.

For decades, states were added into the Union in pairs, the intent of this being to balance electoral power — hoping to preserve an even number of leaning Democrat and Republican states.

Now, some advocates hope the next pair of new states can be the District of Columbia and Puerto Rico.

Del. Eleanor Holmes-Norton (D-D.C.) has supported statehood for Puerto Rico and has often referenced how two states have come into the union at once in the past, usually a blue state and a red one.

“We want statehood for D.C.,” Lightfoot said. “And we’ll get it in whatever way we can, with Puerto Rico or without it, we just want statehood.”

But for Puerto Rico, agreeing to join this pact isn’t cut and dry.

A Not So Significant Majority

Contrast these numbers with D.C.’s overwhelming 86% of the population in favor of statehood, and you see a clear difference regarding interest in the movement by Puerto Ricans and Washington residents, respectively.

This statistic has even made previous supporters of statehood hesitant to continue supporting it.

Senate Majority Leader Chuck Schumer — who in the past said he’d “love” to make Puerto Rico a state — recently told “El Nuevo Día” that the plebiscite “did not reflect the strong consensus required to advance a pro-statehood bill.”

Since being given the right to vote in general elections, Washington D.C. has consistently voted for Democratic presidential candidates since gaining the right to do so.

It’s because of this that all Republican senators have opposed statehood for the District.

Senate Republican leader Mitch McConnell (R-Ky.) made it clear in 2019 that he will never allow Washington D.C. or Puerto Rico to become a state since he considers that the idea is part of the “socialist agenda” of the Democrats to control the Senate.

While Puerto Rico has long been a potential Democratic bastion — when participating in the 2016 presidential primaries in Puerto Rico, the vote leaned Democrat by more than two to one — Republicans have also influenced Puerto Rico’s political representation.

Officially, González Colon belongs to the New Progressive Party, but she caucuses with the House Republican Conference.

Pact advocates see this contrast between Washington and Puerto Rico as a way to guarantee the electoral balance needed to satisfy both parties.

However, island leaders like the Puerto Rican Governor Pedro Pierluisi see Puerto Rico as a potential swing state, sullying the validity of these claims.

“Our rural communities are populated by people with conservative values and could very well vote Republican. Our urban areas are more liberal,” Pierluisi said. “We will be a swing state.”

The resident commissioner also predicts that Puerto Rico would be a swing state, but she bets that voters would favor Republican candidates.

The reality seen by Republicans is that admitting Puerto Rico as a state along with Washington D.C. would be to the Democrats’ advantage. Sentiments brought up for discussion by “Latino Rebels” after President Biden told González Colón he’d vote for statehood if he were living in Puerto Rico.

The status bill presented in this session has reaffirmed the Republicans’ disinterest in this debate.

“I do respect the real concerns of the people of D.C.,” González Colón said at a press conference. “But my priority is the people of Puerto Rico, the 3.2 million Americans, that have been waiting for [statehood] a very long time.”

However, as previously mentioned, not all 3.2 million Puerto Ricans favor statehood.

A vocal population of independentists, including “Radio Independencia” co-host Andrés González Berdecía, have more than “123 years worth of reasons” to want to avoid assimilation with the United States — the biggest example being the debt crisis.

Puerto Rico got into debt after companies took advantage of a U.S. tax break and then went back home after it was phased out. The island tried to sell Wall Street bonds to fill this hole, but that only deepened its debt crisis.

The U.S., wanting the island to pay what they say it owes, has made it take funds away from things like pension plans, infrastructure and public schools — since 2016, 523 schools have closed in Puerto Rico.

“Seeing young people react to all these systems of oppression shows me that they understand that the status quo no longer works and that statehood continues to be unreachable,” Adriana Gutiérrez Colón, co-host of “Radio Independencia,” said. “They’re seeing independence as a potential first step to begin to develop ourselves as a sovereign nation.”

An alternative to González Cólon and Rep. Darren Soto’s (D-Florida) bill is the Puerto Rico Self-Determination Act of 2021.

Introduced in the House by representatives Alexandria Ocasio-Cortez (D-N.Y.), and Nydia Velázquez (D-N.Y.) and by Bob Menendez (D-N.J.) in the Senate, the measure calls for creating a “status convention“ made up of delegates elected by Puerto Rican voters.

The delegates would be responsible for coming up with long-term solutions for the island’s territorial status — statehood, independence, a free association or other options beyond its current territorial arrangement.

The bill has been able to garner support from independentists like González Berdecía and Gutiérrez Colón, saying that a bill like this is one that those at the Puerto Rican Independence Party “have tried to push,” and is one they believe would be “favored by most Puerto Ricans.”

The legislation has also generated support from the movement “Victoria Ciudadana” and the speaker of the Puerto Rico House of Representatives, among others.

Published in conjunction with: