TROUBLED WITH “TPS”: IMMIGRANTS, ADVOCATES HOLD OUT FOR DESIGNATION AS STATUS IS GIVEN TO OTHERS 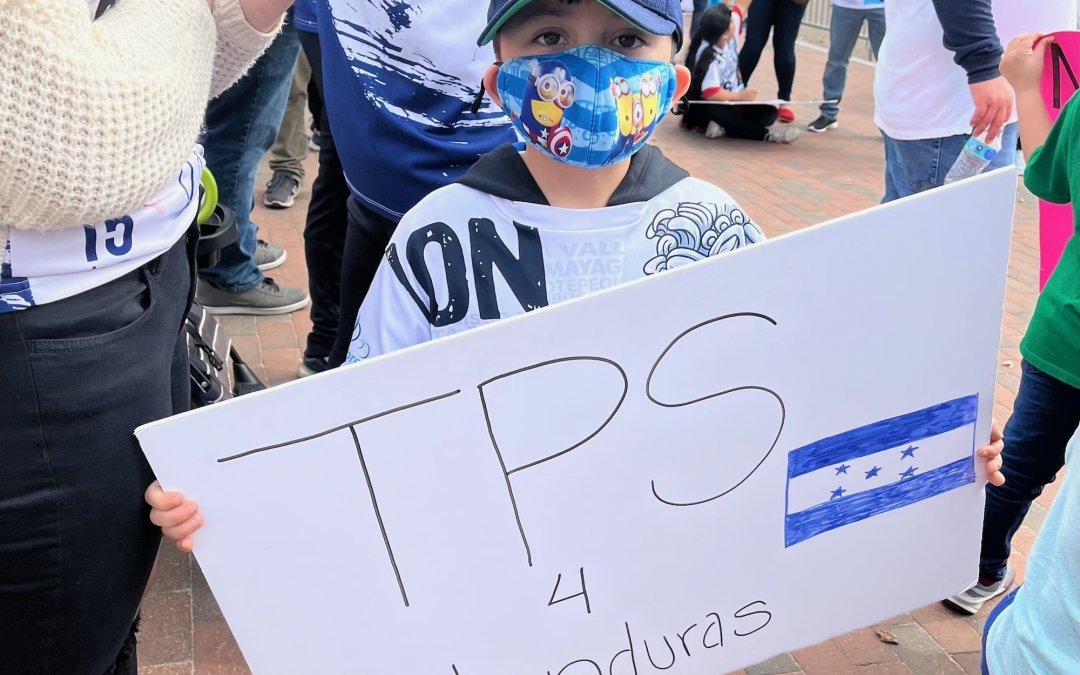 Hosted by Fundación 15 de Septiembre, Honduran immigrants gathered in front of the White House to protest for re-designation of TPS for Honduras. Today, the U.S. is host to over 80,000 Honduran TPS holders. (Ali Bianco/MNS)

WASHINGTON – As Russian troops descended, hundreds of thousands of Ukrainians started to flee their country. Eight days after the invasion, the Department of Homeland Security announced that Ukrainian refugees would be given temporary status, granting eligibility to 75,000 nationals present in the U.S. starting March 1, according to a DHS spokesperson.

Throughout the country, over 300,000 Central Americans make up the majority of Temporary Protected Status holders. In their home countries, they faced violence, political instability, environmental disaster and most recently, the ravaging effects of a global pandemic. For decades, they have depended on this status to ensure their security in the United States.

Now, after news of the swift action for Ukraine, many immigrants from Honduras, El Salvador and Nicaragua continue to hold their breath, waiting for word about their own temporary status that has yet to come since Biden took office last year.

“I felt, like everyone else, that it was necessary,” said Juan Flores of Fundación 15 de Septiembre on the designation for Ukraine. “For Central Americans, they try to not give anything – trying to criminalize Central Americans for the crises on the border, crises that have been inherited over decades. They imagine that in giving TPS, they are promoting more immigration and more Central Americans can come in, but they don’t consider that this is a part of the law that’s existed since 1990, and that laws are made to be followed.”

Fundación 15 de Septiembre hosted a protest in front of the White House on Monday calling for TPS for Honduras. But it’s not just advocacy organizations that have been putting pressure on the president to take action.

Over 30 senators wrote a joint letter in early January to Secretary Mayorkas and Secretary of State Antony Blinken, urging them to re-designate TPS to El Salvador, Honduras and Nicaragua, and to add a designation for Guatemala.

“It is our assessment that the severe damage caused by back-to-back hurricanes just over one year ago, combined with extreme drought conditions, and the social and economic crises exacerbated by the COVID-19 pandemic, warrant such an action by the Administration,” said the senators in their statement.

Technically speaking, Central Americans do have TPS right now. Honduras and Nicaragua have been designated for TPS since 1999, with El Salvador added in 2001. But this designation was almost terminated, and today it hinges on a court case that hasn’t been finalized yet.

Back in 2017, the Trump administration attempted to end TPS designations for several Central American countries. A judge on the U.S. District Court for the Northern District of California upheld an injunction, preventing the termination. By 2020, a three-judge panel on the 9th U.S. Circuit Court of Appeals found that the district court had overstepped.

The kicker is that the 9th Circuit has not issued its final guidance to the lower court. Until the case is finalized, the injunction remains in effect and statuses are renewed every 16 months.

In non-legal terms, this means the ongoing TPS designation for hundreds of Central Americans continues to be up in the air. Lawmakers and advocates alike have been calling for a new re-designation from the Biden administration, creating clarity for these communities.

Given the back and forth that has occurred on TPS for Central Americans for years now, it’s unsurprising that some immigrants and advocates felt uneasy with the speed at which TPS was granted to Ukraine.

But this is just one part of a larger trend of viewing Latino immigrants as a danger rather than an asset, explained Flores.

“The topic of immigration is used to create fear, no matter the administration,” said Flores. “The Biden administration stood up to that fear and were going to support immigrant communities – and these communities turned out massively, mostly Hispanic, to vote. Inspired by immigrants without documents, immigrants that clean houses, [Biden] told them, ‘Help us to vote against the hate, the racism and the fear.’ But we’ve now found ourselves in the same place with a different rhetoric.”

“The problem for Central Americans is that we haven’t had a voice to defend us and fight for our cause,” said Flores. “Still President Biden stays silent, and that is our consternation.”

Many immigrants hoped President Joe Biden would make and reaffirm TPS designations during his State of the Union speech. But this moment never came.

“We’re in trouble,” Rep. Alexandria Ocasio-Cortez (D-N.Y.) told Medill News Service. “I think that there’s a lot of focus around bipartisanship; it’s understandable, it’s valuable. There’s a lot of political chatter about the president’s polling numbers. But polling numbers don’t just come from Republican approval ratings. They come from people who supported this president in an election and are starting to feel disappeared, unseen and undervalued in governance.”

But this issue isn’t black and white. There are large operational and political concerns that come with re-assigning countries TPS, according to Theresa Cardinal Brown, a managing director of the Bipartisan Policy Center and a former DHS official.

“The Biden administration came in promising that they wanted to create a safe, orderly and humane system dealing with migration at the U.S.-Mexico border. They have not been able to implement such a thing. They have moved extraordinarily slowly at changing any of the existing operational or infrastructure that we have at the border to deal with migration,” said Cardinal Brown. “If they were to rush to do something right now that created additional migration at the border, they don’t have capacity to manage it.”

Granting re-designations of TPS could risk a higher influx of migrants at an already-strained southern border. On top of these concerns about how to manage the flow of immigrants, there’s the potential of lawsuits and courts hanging like a Damocles sword over immigration policies, explained Cardinal Brown. These administrative issues, coupled with the politically-charged precedents that accompany progressive immigration changes, could be the fundamental deterrents of TPS.

“I think that absent some other significant change in Central America, like another major natural disaster, I have a hard time seeing them moving on it in the near term,” said Cardinal Brown.

But with Central American TPS designations banking on blurry lines and court cases, one thing remains certain for many immigrants: all eyes are on the Biden administration. The White House did not respond to comment on whether these designations are forthcoming.

“Under these immigration reliefs and laws that have existed since 1990, Honduras qualifies. And since Honduras qualifies, you only need to follow the law,” said Flores “The law is clear that when a country suffers catastrophic damages environmentally, guerillas or pandemics, this country can help them. But even still, after a year of Biden knowing the conditions of Honduras, he doesn’t want to designate TPS.”