TABLING “TPS”: DEMOCRATS CALL FOR SUPPORT AMID LACK OF DESIGNATION FROM BIDEN ADMINISTRATION 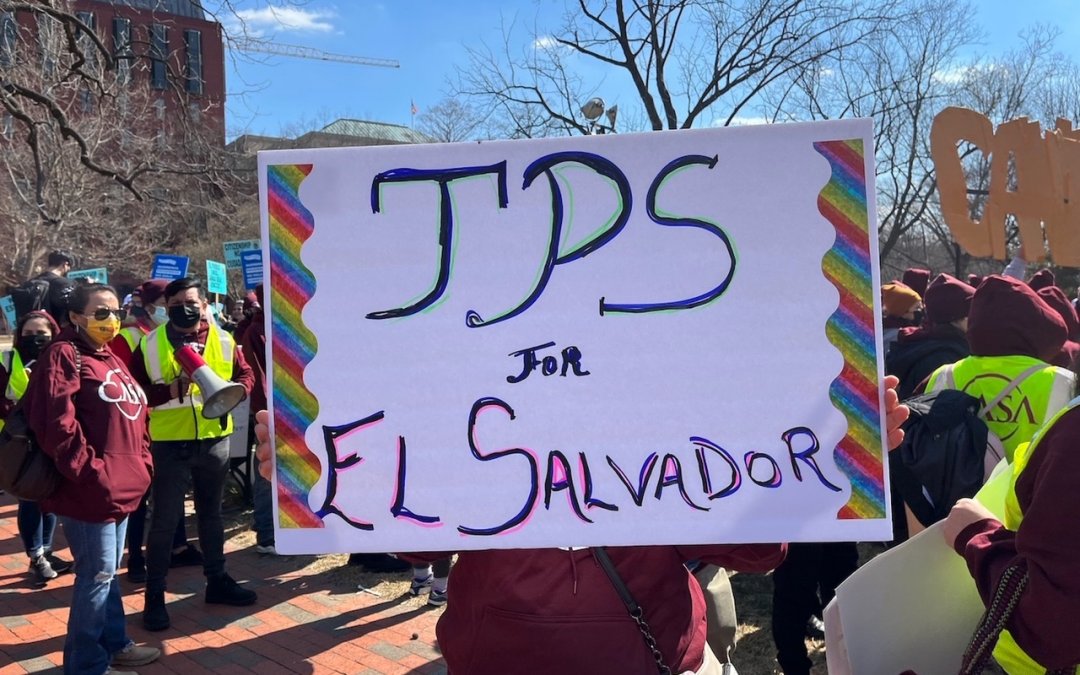 Immigrants protest for TPS re-designation at "People's State of the Union." (Ali Bianco/MNS)

WASHINGTON – As countless Ukrainians begin to leave their homes following the Russian invasion, conversations have spurred around the Capitol about President Biden potentially designating the country for Temporary Protected Status. All the while, countless Central Americans continue to face insecurity about their own status as their TPS designations hang in the balance.

“I have in the past written letters to the administration on TPS for Ukrainians and Central Americans, and I’m hoping to work with some colleagues on some TPS reforms,” said Sen. Tim Kaine (D-Va.).

In the days leading up to and just after the State of the Union address, many Democratic lawmakers threw their support behind extending TPS to Ukraine and continuing to reauthorize the status for Central Americans. But the increased attention on protecting Ukrainian immigrants has led to questions about why countries like those from Central America lack similar jolts of support.

“I think this is exemplary of what we’ve seen even just in broader media coverage and overall policy response, which is giving support to refugees. We should be supporting TPS for Ukrainians. But I also think what many people around the world are seeing is how Ukrainian refugees are being treated, that we are capable of treating all refugees this way,” said Rep. Alexandria Ocasio-Cortez (D-N.Y.).

These affirmations for the program come one day after Homeland Security Secretary Alejandro Mayorkas announced they would be adding Sudan and reauthorizing South Sudan as eligible for TPS.

“I think he should, I wrote a letter to him,” said Sen. Dick Durbin (D-Ill.) about adding a designation for Ukraine. For Central Americans, he added, “I’m all for that. I’ve been for it, it’s been part of every package on immigration.”

More than 30 senators, including Durbin, wrote a joint letter to Mayorkas and Secretary of State Antony Blinken in January asking for TPS renewal for Central Americans.

Ocasio-Cortez, Durbin and Kaine were joined by Democrats from both chambers who affirmed the importance of TPS designations and their extension to people in need.

“It affords them some level of protection,” said Rep. Veronica Escobar (D-Texas). “With the kind of instability that is happening all across the globe, we need to continue to provide as much stability as we possibly can.”

The program allows the president, via DHS, to designate citizens of countries facing armed conflict, environmental disaster or other unlivable conditions to have a direct line to immigrate to the U.S. This program is temporary, and therefore offers no pathway to permanent residence.

The Biden administration has not given a timeline about if or when these designations will come, Durbin told MNS.

“Fully support it,” said Rep. Ritchie Torres (D-N.Y.) on TPS. “That’s something the president can do unilaterally, and he should do it.”

“I want to hear that we’re going to offer TPS status to Ukrainians who have to flee the country and that we have a plan for comprehensive immigration reform. This is part of our responsibility,” Warren told MNS ahead of the State of the Union.

A bipartisan pathway  to reform could be possible, according to Kaine. And while some of his Republican colleagues have closed the door on this issue, others might be open to a window.

“I’m going to wait and see what [Biden] proposes on that,” Sen. Susan Collins (R-Maine) told MNS. “With regard to immigration in general, I think we do need an immigration bill to take care particularly of the Dreamer population.”

Sen. Joni Ernst (R-Iowa) told MNS that helping Ukraine regain stability needs to be the country’s focus but did not explicitly shut down calls for temporary status.

“I do believe that welcoming refugees is really important, and the TPS program has been very important,” said Ernst. “But what we want to see hopefully is a positive end to what’s going on in Ukraine, where Ukraine maintains an independent country.”

The broad support for Ukrainian immigrants poses a question that Ocasio-Cortez herself was asking: “Why is it that some refugees are more acceptable than others?”

“It’s on the front page, it leads the news,” said Durbin on the support for Ukrainians. “People are empathizing with the plight of these poor people, but they should feel the same thing about other TPS recipients.”

This sentiment extends beyond Central America into other parts of the world that have experienced the same differential treatment on immigration, according to Rep. Ilhan Omar (D-Minn.).

“I think it is important for the world to show up for those that are in the midst of war, but it’s really disheartening to see just the way in which everyone, including here in the United States, is responding in comparison to Syrian immigrants, Iraqi immigrants, even Afghans that were directly impacted by our policies and our invasion of their country. To our brothers and sisters at the border who desperately need our support and our admission,” said Omar.

There is not as much controversy surrounding the admittance of people from Honduras or El Salvador under the Biden administration as there was under the Trump administration, partly because these countries have held TPS designations for several decades and are important to the American economy, according to Kaine.

“One of the reasons that there hasn’t been much controversy about Central American TPS recently is because they’re such a key part of our workforce in Virginia,” said Kaine. “So when I meet with the Associated General Contractors or I meet with [the agricultural industry] in Virginia, it used to be that they wanted to just talk about taxes and regulation. Now they want to talk to me about TPS extension, which shows that these folks are part of the fabric of our commonwealth and are really necessary.”

The importance of TPS remains unquestioned for many Democrats, but the ongoing uncertainty surrounding the status, both for those who are waiting on designations and those who currently have it, is part of a larger problem of failing to live up to immigration promises.

“We passed the Dream and Promise Act, we continue to advocate for the extension of TPS but without really passing comprehensive immigration policy, we’re going to continue to be in this cycle of promises made not kept,” Omar told MNS.

With the majority of the 400,000 TPS holders coming from south of the border, Escobar explained that help for many Latino immigrants needs to be a Congressional priority.

“If we want to truly address some of the human misery that we see on the southern borders as people continue to flee their homeland, we’ve got to expand legal pathways and that’s on Congress,” Escobar told Medill News Service. “Do I have faith in the Senate on this front? I don’t.”

Updated 6:10 pm: Mayorkas announced that TPS will be designated to Ukrainians for 18 months beginning with those who arrived in the U.S. starting March 1, 2022. This announcement comes eight days after the Russian invasion began. There is still no word on Central Americans’ TPS status.