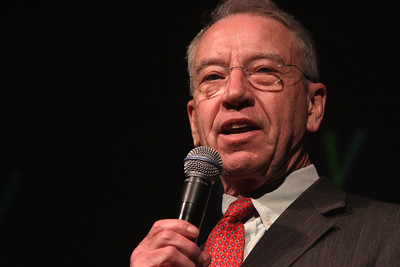 “Over a long period of time, I have found that the people that come into those programs don’t meet all the requirements of the law,” Grassley told Medill News Service. “I want to make sure that the integrity provisions are beefed up.”

This legislation aims to ensure that the employment and wage requirements of these visas are met. It also prioritizes the employment of Americans over foreigners

The push for a merit-based immigration system is not something new. Some senators have proposed this reform for years.

“I had a campaign — ran for president — and that was part of the proposal that I made,” Sen. Mitt Romney (R-Utah) told MNS. “And I still agree with that.”

“I’ve been for it for years,” Graham told MNS.

The push for merit-based immigration has bipartisan support, both from its co-sponsors and from other lawmakers, such as Sen. Tim Kaine (D-Va.), so long as it does not drastically change the countries from which immigrants come.

“I am very open to that idea as long as it doesn’t dramatically shift focus away from country,” Kaine told MNS. “You could conceive of merit-based systems that would kind of maintain the status quo about where people are coming from but use merit criteria. I don’t have any problem with that as a concept.”

This legislation does not address the issue of border security and, therefore, does not entirely solve this issue of immigration reform, some Republican lawmakers told MNS.

“I think that until we secure the border, though, it’ll be difficult to even have a merit-based immigration system in place or one that addresses, comprehensively, all the issues associated with it.,” said Sen Mike Braun (R-Ind.).

Immigration reform should instead be focused on other issues within the system, according to Sen. Elizabeth Warren (D-Mass.).

“We need comprehensive immigration reform. I want to see us, right now, offer citizenship to our Dreamers, to those who are here,” Warren said. “I think that’s where we start this.”