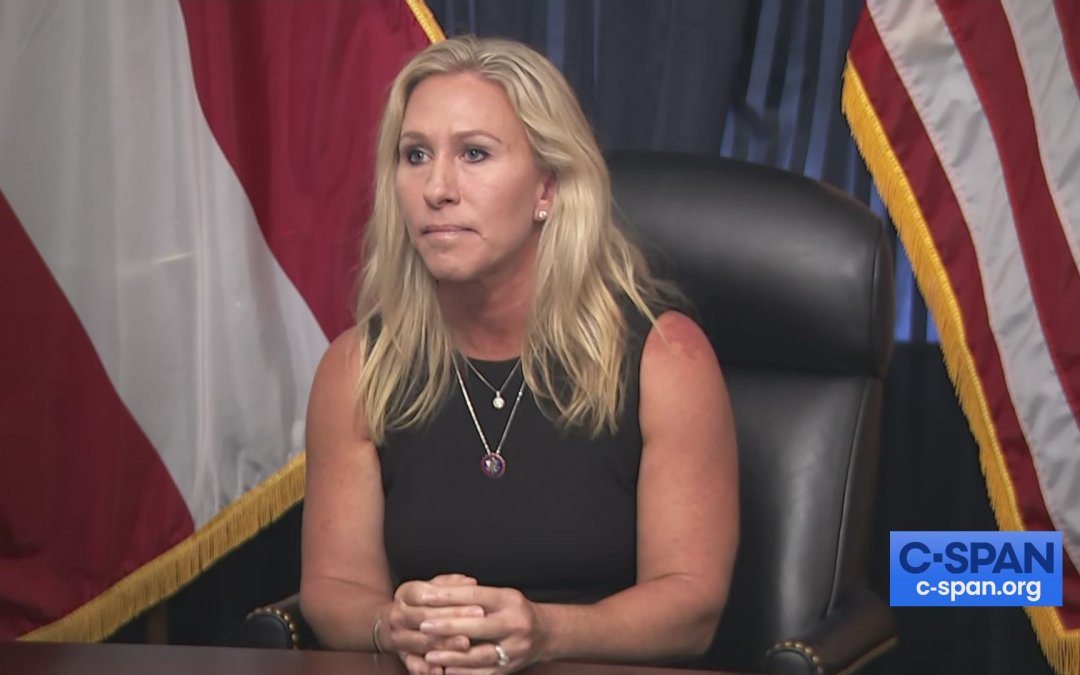 WASHINGTON – While Gov. Kim Reynolds (R-Iowa) dinged President Joe Biden on issues salient to the American people like crime, education and inflation in the official GOP response to the State of the Union, Rep. Marjorie Taylor Greene (R-Ga.) took a different approach in her speech, accusing her political opponents of treason and making spurious claims about Biden’s actions in office — after calling herself a “forgiven sinner washed in the blood of Jesus Christ.”

“We have a mentally incompetent, feckless, dementia-ridden piece of crap” in the White House, said Greene from a lectern at a D.C. area hotel, who “doesn’t work for America; he works for China.”

Greene’s response came hot on the heels of her address at the America First Political Action Conference, a group founded by white nationalist and Holocaust denier Nick Fuentes. That gathering was not the first time Greene has associated herself with such a worldview; she previously shared a video on Facebook promoting the idea that “Zionist supremacists have schemed to promote immigration and miscegenation” and accused the Rothschild banking firm of having started California wildfires with a laser beam from space, among other incidents.

Greene’s comments about Jews and fraternization with white nationalists have engendered upbraidings from elected Republicans including Rep. Dan Crenshaw of Texas, House Minority Leader Kevin McCarthy of California and Sen. John Thune of South Dakota. Even Republican National Committee Chairwoman Ronna McDaniel expressed concern, saying “white supremacy, neo-Nazism, hate speech and bigotry are disgusting” and that “they have no place in our party.

Quite tellingly, though, McDaniel did not say the RNC would censure Greene for her statements and associations. That step, it seems, is reserved for such “destructive” figures as Reps. Liz Cheney (R-Wyo.) and Adam Kinzinger (R-Ill.), who sit on the House select committee investigating the Jan. 6 attack.

Tuesday night’s speech did not lack for thinly-veiled antisemitic remarks, with Greene rattling off a laundry list of grievances — including an open border and “traitors within” — she attributed to the U.S. government’s removal of prayer from the classroom and pursuit of “globalism.”

“The war hawks, globalist elites and neocons are beating the drums of war, preparing to sacrifice more of our sons and daughters to defend another country’s borders, but not our own,” Greene said amid specious accusations that Biden has sent “thousands of troops” and U.S. Customs and Border Patrol agents to Ukraine.

Greene continued the speech with rabid and salacious attacks against the Democratic Party, saying “not only did Democrat authoritarians kill off our elderly … they hurt our companies” and that “the left needs to stop empowering men to beat women, and we won’t stand for them to beat our daughters.”

Perhaps most important within the context of internecine Republican battles were Greene’s comments about the 2020 presidential election and the Jan. 6 attack on the Capitol.

“Stolen elections have consequences … No one trusts the results of that election,” Greene said before saying of the Capitol rioters: “Democrats and the media condemn any American that wants to put America first,” and that is why they are in jail.

Few Republican senators wished to speak about Greene’s Tuesday speech, with Mike Braun (R-Ind.), Senate Minority Leader Mitch McConnell (R-Ky.) and Tim Scott (R-S.C.) refusing to comment on the address to Medill News Service —  a quiet “she says a lot of stuff” aside from Braun notwithstanding.

Sen. Ted Cruz (R-Tx.) said, “I recognize that the press loves nothing more than asking one Republican to criticize another Republican. You’re welcome to play that game, but I’m not interested in playing it.”

Others were quick to point out that they did not watch the speech and had no interest in doing so, with Sen. Lindsey Graham (R-S.C.) saying, “I haven’t heard it, so that’s how much attention I’ve given it,” and Sen. Chuck Grassley (R-Iowa) saying, “I didn’t watch that. I watched Gov. Reynolds and then I went to bed.”

Some GOP senators, though, were willing to share their thoughts.

Sen. Joni Ernst (R-Iowa), responding to a question about Greene’s comments regarding Jan. 6 defendants, said, “I’m sure they do love America. We all love America, but I don’t excuse their actions.”

“I’m not a big fan of the people that stormed the Capitol on Jan. 6,” Sen. Kevin Cramer (R-N.D.) told Medill News Service, “even though there were several who, I suppose, you could say innocently followed others in.”

Cramer said Greene’s “bombastic rhetoric” surrounding the riot “takes away the seriousness of some of the real situations related to Jan. 6, including some people who seem to be in jail way too long for things way too minor. Beyond that, I don’t have a lot of time for that kind of rhetoric.”

One comment Cramer made to Medill News Service seems to capture that wing of the Republican Party’s feelings toward characters like Greene:

“I am a big-tent Republican, but even a big tent should have some walls.”