A progressive push to make abortion “unnecessary and unthinkable” 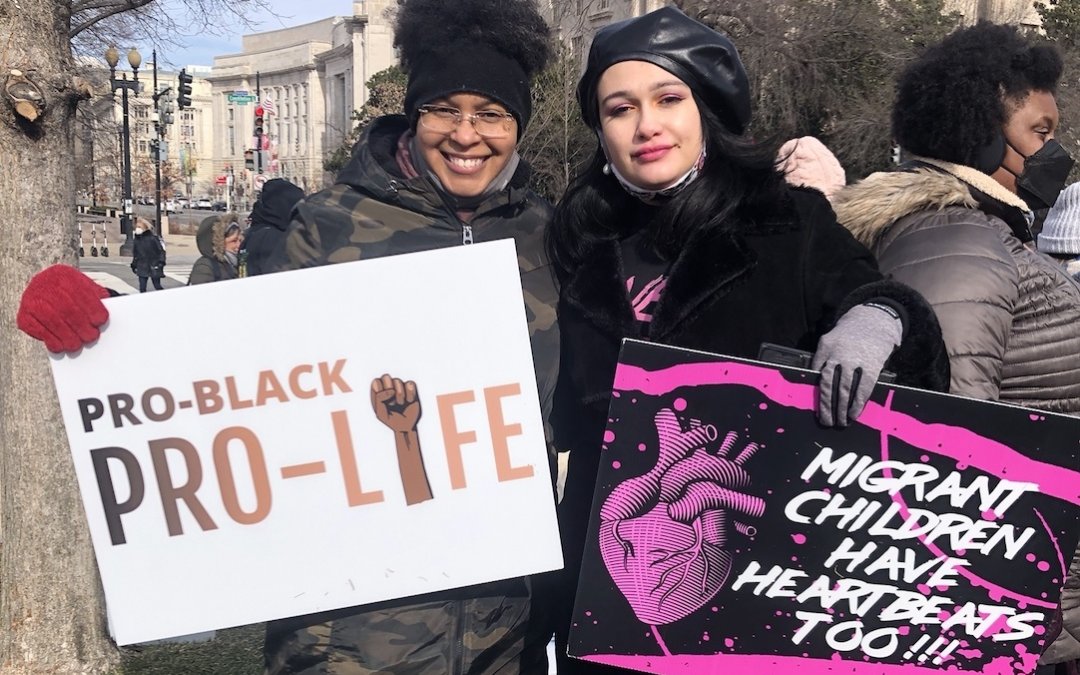 WASHINGTON — Cherilyn Holloway was born and raised in Oberlin, Ohio, a key stop on the Underground Railroad.

She was taught to be proud of that history and to stand for justice. After the murders of George Floyd and Ahmaud Arbery, she took to the streets and founded an organization that teaches the “real Black history.”

In January, Holloway headed to Capitol Hill for the annual March for Life. To her, the two issues are intertwined.

“Whether I’m at [the March for Life] or I’m at Black Lives Matter march, I want [my grandchildren] to be able to see consistency in that I show up,” Holloway said. “As an African American, this is what our history is rooted in – marches and sit-ins and protests – and this is how we get things done. And the fact that abortion disproportionately affects the Black community, I have to show up.”

In May 2020, Holloway founded Pro-Black Pro-Life after realizing that while the anti-abortion movement was interested in her voice when discussing abortion in the Black community, they weren’t when it came to any other racial injustice. She couldn’t separate the two.

“I just felt like I couldn’t stay in a space that wouldn’t recognize these lives having value,” she said.

With anti-abortion advocates hoping that the Supreme Court will use a Mississippi law that bans most abortions after 15 weeks to overturn Roe v. Wade, a number of progressive anti-abortion groups are focused on their own refrain: making abortion unnecessary and unthinkable. For some that means actively working to overturn Roe, but for others the focus is on building up social support systems, including affordable housing, healthcare and child care, to ensure that the decision to get an abortion isn’t due to a lack of resources.

“My work doesn’t change. Whether it’s overturned or not, it doesn’t change, women are still going to be having abortions,” said Destiny Herndon-De La Rosa, the founder and president of New Wave Feminists. She went on to explain an experience where a woman in Brownsville, Texas called her organization looking for pregnancy resources. Herndon-De La Rosa found nothing in the woman’s area – a group had previously existed, but after one of the local Planned Parenthood clinics was shut down, they dissipated.

“It’s my biggest fear that that could happen on a larger scale,” she said. “That we could see these resources dry up because people who have never broken laws and never experienced that type of desperation or panic assume women will not do that.”

While some of these organizations, like the Progressive Anti-Abortion Uprising, are single-issue, many follow what’s called a consistent life ethic, or whole-life philosophy. That stance values life at all stages, condemning, among other issues, abortion, the death penalty and euthnasia.

“I oppose all forms of violence against human beings, no matter their circumstance, no matter their age, their size, their race, their level of ability,” said Aimee Murphy, the founder of Rehumanize International. Later adding, “If we actually want to end abortion, not just make it illegal, but if we actually want to end abortion, we need everyone to believe that abortion is an unacceptable act of violence.”

Comfortable in the messy middle

Progressive and feminist anti-abortion organizations have existed for years – Feminists for Life was founded before Roe in 1972 — but over the past decade there’s been a surge of new groups.

“I harbored pro-life views for years before I actually identified as being pro-life, and that’s because I just didn’t see anyone else like me doing it. I didn’t see any secular or left-leaning people who identified as pro-life,” said Terrisa Bukovinac, the executive director of the Progressive Anti-Abortion Uprising, which she founded last October.

“I was potentially harboring years of activism secretly simply because I didn’t see other people like me doing it, so the representation is really critical to mobilizing,” she said.

Even with the growth of new progressive anti-abortion groups though, Pro-Black Pro-Life still stands alone as an organization “completely focused on the Black community.”

“I don’t typically talk about pro-life issues without talking about racial justice issues. Outside of that I don’t talk about racial justice without talking about pro-life issues,” Holloway said. “I found a place that I was comfortable with where I didn’t feel like I had to be different people on different sides, but I could stand directly in the middle and be comfortable.”

Herndon-De La Rosa said she’s developed a “very thick skin” existing in the middle ground of the anti-abortion and feminist movements and is “used to being hated.” It’s a sentiment shared by others, who embrace both despite consistently hearing that the identities can’t co-exist.

Straddling issues that are among the most polarizing in the United States, some of these activists register as independents and describe themselves as “politically homeless.” Others use terms like “leftist” and “progressive” or explicitly affiliate with the Democratic Party.

Regardless of how they identify, they are in the minority. Only 19% of Democrats and those who lean toward the Democratic Party say abortion should be illegal in all or most cases, according to a May 2021 Pew Research Center poll. That number becomes even smaller among ​​liberal Democrats and Democratic leaners.

“I always joke and say, ‘I don’t know why I didn’t get the call to, you know, to homelessness or to feed hungry children, why I had to be in the middle of the most hated battlegrounds right now in the United States,’” Holloway said. “People tell me it’s because I can.”