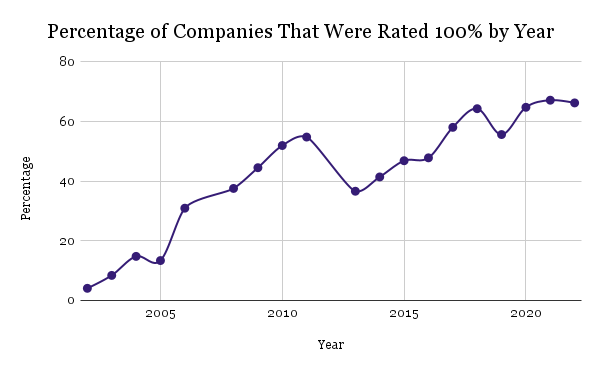 “We are never going to reach a destination but will always be on a path of continuously improving workplaces and setting better benchmarks that capture the needs and the requirements for the whole community to feel included and safe at work,” said Keisha Williams, the director of the Workplace Equality Program at the Human Rights Campaign Foundation.

The 2022 Corporate Equality Index report marks a record-breaking engagement from corporations with the participation of 1,271 companies, which includes 379 Fortune 500 companies. Of these participants, 66% received a score of 100% while only 1.73% received a 0%.

The same focus on protections for the LGBTQ community did not always take center stage, but there has been notable progress since the release of the initial report in 2002.

With time, as a growing number of corporations have shown tangible dedication to LGBTQ equality, the HRC has continued to raise the bar so as not to allow entities to become complacent.

“It’s harder to get a score of 100 now than it was 20 years ago,” said Karen Morgan, who serves on the HRC Board of Directors and Business Advisory Council as well as the CRM Operations Manager at GE.

There are seven companies that have maintained a score of 100% throughout the last two decades despite the increased difficulty in doing so. Some companies, however, took a bit longer to receive such high marks.

Originally, Accenture North America received 86% in 2002. Accenture worked to improve its score and consistently received a 100% for the last 15 years.

“Accenture’s been involved with the Index since its very first year: 2002. And for us, it reinforced how we can all do the right thing,” said Jimmy Etheridge, the CEO of Accenture North America. “All along the way, we have benefited from the Human Rights Campaign’s support.”

During an event to unveil this year’s findings, HRC leaders expressed pride in the progress that it has made over the last 20 years and looks forward to continuing on its mission in the future.

“While we celebrate our successes, we also know that the work must continue,” said Joni Madison, the interim president of the Human Rights Campaign. “With your help, we look forward to driving workplace inclusion and LGBTQ+ equality in the years to come.”