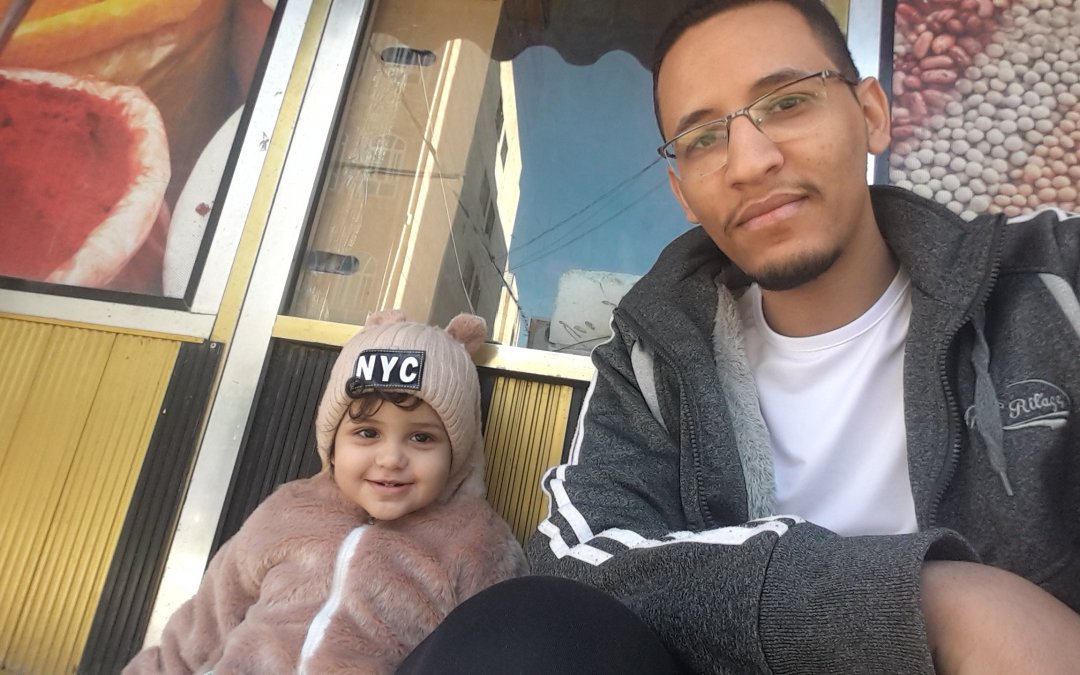 Mohammed Alarefi, a native of war-torn Yemen, shown with his child, was prevented from immigrating to the United States despite him and his wife winning the U.S. Diversity Visa Lottery a combined three times. (Courtesy of Mohammed Alarefi)

WASHINGTON — When Mohammed Alarefi, a native of war-torn Yemen, won the U.S. visa lottery in May 2018, it was the realization of his childhood dream: a chance to move to America.

“I registered every year until the miracle happened and I was chosen” for a diversity visa for fiscal 2019, Alarefi said.

The Diversity Visa Lottery program allows people randomly selected from countries with low levels of immigration to the United States to obtain visas. Every year, up to 55,000 diversity visas are available, and those selected may bring spouses and unmarried children under age 21, who are called derivatives. But the timing of Alarefi’s miracle couldn’t have been worse. Winners and their derivatives must complete the visa application process within the fiscal year for which they were selected. Fiscal years run from Oct. 1 to Sept. 30. Those who do not obtain their diversity visas before the end of the fiscal year will lose their spots. With a less than 1% chance of being selected in the visa lottery, not obtaining the visa in time means they most likely will have lost a once-in-a-lifetime opportunity.

In January 2017, President Donald Trump had signed an executive order prohibiting travel to the United States from seven predominantly Muslim countries, including Yemen. That was just the start of an assortment of barriers that prevented those who won diversity visas from coming to the United States.

The justification for Trump’s ban was national security, but critics assailed the rule as being targeted toward Muslims. Though the courts initially blocked it, and the list of banned countries changed several times, the Supreme Court eventually allowed the ban to go into effect.

And although it only was an entry ban, the State Department refused to issue diversity visas to lottery winners from countries subject to the ban. With that in place, Alarefi and his family were unable to obtain visas before the fiscal year ended.

“Here my dream was shattered for the first time,” Alarefi said.

But he refused to give up, applying for the visa lottery again the next year. Despite the odds, he won again in the fiscal 2020 diversity lottery. And again, he and his family weren’t able to obtain visas.

Solmaz Vosog, a 2019 visa lottery winner from Iran, said she feels her family has been discriminated against.

When they found out that they couldn’t get visas because of the travel ban, “my surprised son asked, ‘Is there still religious and racial discrimination in America?'” Vosog said. “The Constitution says all human beings are equal.”

On his first day in office, President Joe Biden issued a presidential proclamation ending Trump’s travel ban, calling it “a stain on our national conscience.”

However, Biden’s administration later announced that diversity visa winners whose status had expired during the ban would have to re-enter the lottery, citing federal law limiting their eligibility to one fiscal year.

“My wife and my child and I celebrated for days and nights,” he said.

But although the travel ban ended in January, Alarefi’s family still weren’t able to obtain visas. A series of bans, policies and delays related to COVID-19 caused many 2020 and 2021 winners to lose their chance to come to the United States.

They weren’t alone. A series of bans, policies and delays related to COVID-19 caused many 2020 and 2021 winners to lose their chance to come to the United States.

That is because on April 20, 2020, Trump issued Presidential Proclamation 10014, which suspended the entry of most immigrants, including visa lottery winners and their derivatives, into the United States to protect the country’s economic recovery from the pandemic.

The State Department interpreted this as a freeze on not only immigrant entry, but also on issuing immigrant visas.

Also, between January 2020 and April 2021, Trump and then Biden issued presidential proclamations that suspended entry of non-Americans from numerous countries to prevent the spread of COVID-19.

In March 2020, the State Department began to interpret these regional entry bans as a prohibition of the issuance of visas to individuals subject to the bans.

In March 2020, then-Secretary of State Mike Pompeo directed all diplomatic and consular posts “to immediately suspend all routine nonimmigrant and immigrant visa services” due to the pandemic.

Consular posts were restricted to providing “mission-critical and emergency visa services,” which did not include processing diversity visas.

After consular posts were allowed to resume services, the State Department in November 2020 implemented a tiered prioritization system that placed diversity visas in the bottom tier.

This scheme remained in place even after Biden reversed Proclamation 10014, and the State Department didn’t end it until November.

Tiered prioritization greatly limited the number of diversity visas issued. By the end of fiscal 2021, the State Department had issued only around 15,000 of the almost 55,000 visas allocated for the year.

Many visa lottery winners who couldn’t get visas say they were left worse off than before, as many had given up educational and job opportunities or even sold their homes in anticipation of moving to the United States.

A State Department official said the tiered prioritization scheme was implemented because the department had a reduced capacity for processing visa applications due to the pandemic and chose to prioritize family reunification.

Curtis Morrison, a lawyer who represents visa lottery winners who are suing the government because they couldn’t get visas due to COVID-19 policies, criticized the Biden administration for carrying on some of Trump’s policies and for fighting in court to keep from having to issue expired diversity visas.

“They want to keep out these diversity visa immigrants,” Morrison said. “Why that is, I have no idea, because Biden ran on a platform that said he was going to increase the number of diversity visa allotments, but he’s fighting the ones that were allotted. It doesn’t make sense.”

Hope exists for some visa lottery winners, thanks to a series of court cases in which judges ordered the State Department to either issue some diversity visas or to reserve a certain amount pending the outcome of litigation.

But for the vast majority of winners, their only hope is language in the current version of the Build Back Better bill.

It would make diversity visas for 2017 through 2021 available to winners and derivatives who were denied visas or admission due to Trump’s travel ban or who were unable to get visa interviews or enter the country due to COVID-19 or to bans, policies and processing delays related to the pandemic.

However, Morrison said he worries that the language won’t make it into the final version of the bill, since diversity visa winners don’t have as much support as other categories of immigrants, such as universities wanting to bring in international students or Big Tech wanting to bring people in on employment visas.

“I don’t want any of my clients to have false hope,” Morrison said. “I would hate for them to stay in limbo, wondering whether or not they’re going to get relief from Congress when I know that our Congress just isn’t known for that.”

However, Alarefi is not giving up hope.

“Our dream is simple,” he said. “Just immigrating to America.”