Biden signs off on millions for electric school buses. Here’s what that could look like. 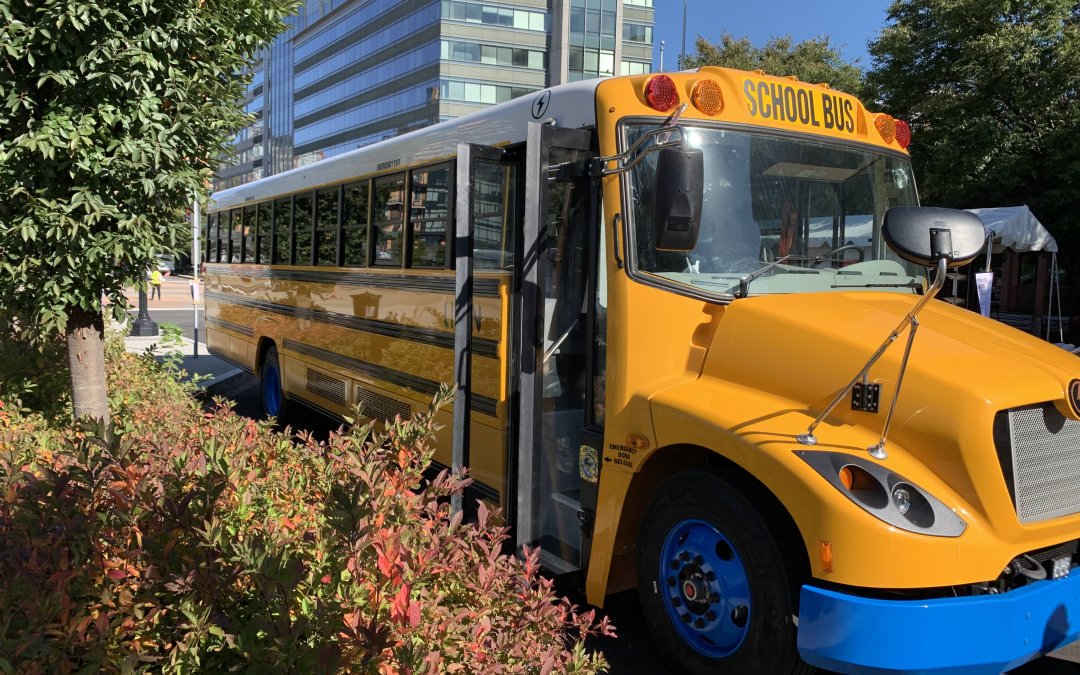 A Lion Electric school bus. Orville Thomas, Lion Electric's lobbyist, said the buses are designed to look the same as the diesel school buses most people are familiar with. (Yiming Fu/MNS)

WASHINGTON — Every morning, more than 20 million American children catch a school bus. Soon, many will be boarding electric buses, part of a $5 billion federal investment in clean school buses in the Biden administration’s infrastructure bill.

The bill, which President Joe Biden signed into law Nov. 15, earmarks $2.5 billion of the landmark $5 billion for clean school buses for electric school buses specifically. This money could bring electric school bus technology to the most polluted communities, whose residents are disproportionately living on low incomes and people of color, advocates say.

Around 95% of school buses in the U.S. run on diesel, which pollutes residential areas and can increase risks of bronchitis, asthma and pneumonia for young children, according to the Journal of Health Economics.

Until now, the greatest barrier for schools to buy electric buses has been the price tag. Biden’s investments could change that, Thomas said, because school districts will have access to federal funds, and manufacturers will be able to ramp up production and research new technologies.

Thomas predicts electric school buses will be the same price as diesel school buses in the next five to 10 years.

Athena Motavvef, legislative director at Earthjustice, an advocacy group fighting climate change, said she has fought for electric school bus funding because she had asthma growing up, which can be complicated by diesel pollution.

“You would expect a vehicle that takes you to school would protect you from those sorts of things,” Motavvef said.

Black Americans are 40% more likely to have asthma than white Americans, and Hispanic Americans are twice as likely to visit the emergency department for asthma compared to non-Hispanic whites, according to the Department of Health and Human Services.

Motavvef said that demand for electric school buses largely comes from wealthy white school districts, but the federal government needs to ensure the communities most impacted by diesel pollution, which tend to be Black, brown and low-income communities in urban cores, get their share of the money.

To ensure the money reaches communities that need it most, Gilbert Rosas, energy education specialist at the Stockton Unified School District in California, said the federal government needs to partner with school districts that have experience in school bus electrification.

“Time is money,” Rosas said. “And the government, in my opinion, the longer they touch it, the more they waste it. We need to get in, get out and get it done.”

Gilbert said government officials and activists in other districts should turn to Stockton United — a majority-Latino school district where 78.8% of students qualify for free and reduced lunch — as a roadmap for electrifying fleets across the country.

With a $5 million grant from the state of California, Stockton Unified bought four buses and 24 chargers, which were out on roads in less than a year. Rosas has continued to electrify the fleet: The district now has 11 electric school buses and is on track to convert a third of its fleet in three years.

He said he has brought in $16.8 million in electric school bus funding through grants and other incentives programs.

But, Rosas said, the journey wasn’t all smooth sailing. The district had issues with DC chargers and had to return the original chargers they ordered. Another hurdle was learning how to work with utility companies, which he said have complicated bureaucratic processes that set his timeline back by 6 months.

But Rosas pushed through, he said, because the work is all for the kids.

“These are kids in lower income places,” Rosas said, “and they don’t get a chance to see new things, let alone new things that help their health…I’m fighting for these kids to know all about what they can achieve.”

“I want to leave this story as our legacy,” Rosas said, “and I want our kids to take up the baton of green career paths.”