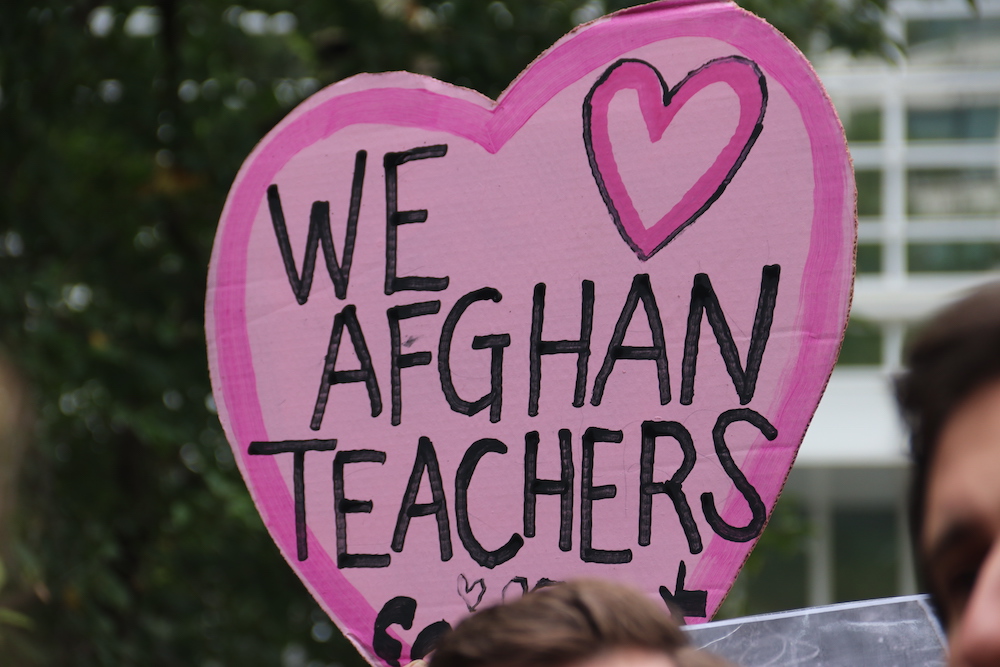 Demonstrators hold up a sign at a press conference outside the World Bank headquarters in Washington on Sept. 30. (Ali McCadden/MNS)

WASHINGTON — UNICEF launched a plan this month that aims to pay teachers’ salaries in Afghanistan without going through the Taliban-run government, which has been a sticking point for countries and international organizations that had provided billions in foreign aid to the previous Afghan government.

Teachers’ salaries traditionally have come from the Afghan government’s Ministry of Education, UNICEF spokesperson Joe English said in a statement.

To allow world leaders to deliver humanitarian aid to the country without funding the Taliban, bypassing the de facto Ministry of Education, UNICEF will send money directly to teachers by using private sector financial systems, such as private banks and mobile networks, English said.

English added that specific funding sources have not yet been agreed on, but UNICEF is in discussions with “several donors and international financial institutions.”

Meanwhile, the agency is preparing the groundwork to deliver payments – including visiting every formal public school in the country to confirm a list of existing teachers.

Afghanistan is one of the most aid-dependent countries, with 75% of the government’s budget coming from foreign aid, she said.

But the World Bank paused funding to Afghanistan in August, including the reconstruction fund.

That gap in funding, combined with decisions by the U.S. and the International Monetary Fund to freeze their aid to the country, meant Afghanistan lost billions of dollars and immediately entered into economic collapse.

Many workers previously paid through international funding lost their salaries, Barr said. The Biden administration announced it would provide an additional $144 million in essential, life-saving aid to Afghanistan in late October, bringing the U.S. total to $474 million this year. But It would not include education funding.

Tamana Azad, an eighth grade teacher at Sardar Mohammad Dawood Khan High School in Kabul, who has been out of work since August, said in an interview that many girls are becoming hopeless because they are stuck at home, unsure when they will be able to return to school.

Barr said providing foreign aid for education becomes complicated because the current system does not prioritize educational rights for women and girls.

“I don’t think donors should support a system that educates boys and not girls,” Barr said, adding that funding decisions should be part of a larger negotiation with the Taliban about women’s rights.

She met with the de facto Minister of Education Sheikh Molvi Noorullah Munir, who promised to deliver an action plan for reopening girls’ secondary schools – though he did not give a clear timeline.

Sherif said that an estimated $1 billion is needed for the education sector in Afghanistan. UNICEF is ready to act immediately once it receives funding, she said.

“Our priority is to make sure that education is part of the humanitarian response,” she said. “There are ways of doing this in a crisis situation like Afghanistan.”