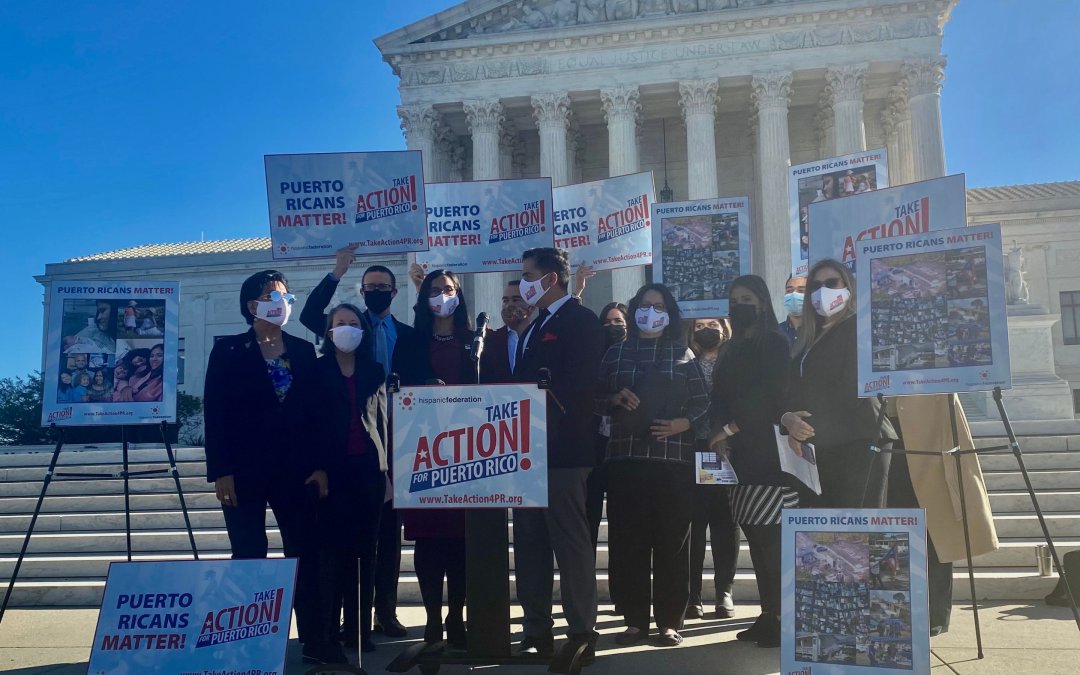 WASHINGTON — A dispute over $28,000 could have broad implications for the rights of Puerto Ricans and residents of other U.S. territories.

The U.S. Supreme Court heard oral arguments Tuesday on whether the exclusion of Puerto Rico from the Supplemental Security Income program violates the equal protection component of the Fifth Amendment’s Due Process Clause.

The SSI program provides monthly payments to low-income Americans 65 or over or who are blind or disabled who live in one of the 50 states, the District of Columbia or the Mariana Islands.

In 2017, the federal government sued José Luis Vaello Madero, now 67, for repayment of $28,081 it claims he wrongly received as a resident of Puerto Rico.

Vaello Madero was living in New York state when he began receiving SSI payments in 2012. In 2013, he moved to Puerto Rico to care for his ailing wife. As a result, he lost his eligibility to receive SSI benefits, but he continued to receive them for several years because the Social Security Administration was unaware of his move.

Vaello Madero’s lawyers argue the exclusion of Puerto Rican residents from the SSI program is unconstitutional because it denies them equal protection under the law, which the Supreme Court has held is implied by the Due Process Clause of the Fifth Amendment. A federal district judge and the 1st U.S. Circuit Court of Appeals sided with Vaello Madero.

Hermann Ferré, an attorney for Vaello Madero, told the Supreme Court the Due Process Clause mandates that the federal government treat residents of Puerto Rico the same as other Americans in all circumstances.

In their brief, Vaello Madero’s attorneys argue that denying Puerto Rican residents government benefits available to other Americans constitutes “singling out [Puerto Ricans] for second-class treatment that gives lie to their status as equal Americans.”

The government’s attorneys argue Puerto Rico’s status as an unincorporated territory means the federal government is within its rights to deny Puerto Rican residents SSI benefits.

The government has a rational basis for excluding residents of Puerto Rico from the SSI program, as Puerto Ricans do not pay federal income taxes, Deputy Solicitor General Curtis Gannon told the justices.

“Congress has a legitimate interest in avoiding a one-sided fiscal relationship under which Puerto Rico shares the financial benefits but not the financial burdens of statehood,” the government argued in its brief, “and declining to include Puerto Rico in the SSI program is a rational means of furthering that interest.”

However, Justice Sonia Sotomayor pointed out that people who are eligible for SSI benefits would not pay federal income taxes regardless of where they live.

“Puerto Ricans are citizens, and the Constitution applies to them,” Sotomayor said. “Their needy people are being treated different than the needy people in the 50 states.”

Puerto Ricans have been U.S. citizens since 1917, when President Woodrow Wilson signed the Jones-Shafroth Act. However, beginning in 1901, the Supreme Court ruled in a series of cases, known as the Insular Cases, that residents of Puerto Rico and other unincorporated U.S. territories do not have the same constitutional rights as other Americans. The high court worried that extending full constitutional rights to the “uncivilized” people of Puerto Rico, who were of “alien races,” would result in the “bestowal of citizenship on those absolutely unfit to receive it.”

In an amicus brief, civil rights group LatinoJustice asked the Supreme Court to overturn the Insular Cases, saying they are “predicated on racist assumptions and rationales that indisputably have no place in modern American jurisprudence.”

Before the oral arguments, the advocacy group Hispanic Federation held a news conference outside the Supreme Court.

Aurelius Aponte, a mother of two, said she returned to Puerto Rico from Florida to care for her sick mother and subsequently lost SSI benefits for her younger daughter, who suffers from several major heart conditions.

“Why would I stay in silence when someone wants to discriminate against my miracle baby?” Aponte asked.