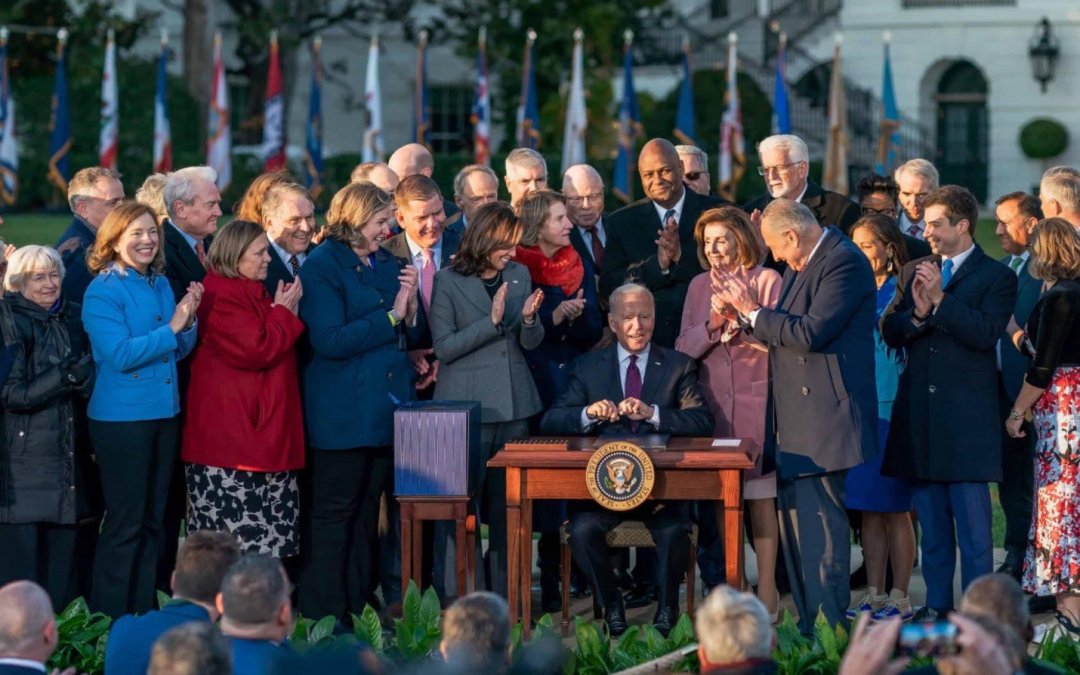 According to the White House, the infrastructure package for New York is intended to revamp roads and bridges, upgrade public transportation, expand its electric vehicle charging network, provide better broadband coverage, improve water infrastructure and modernize airports. Biden signed the bill during a ceremony on Monday on the White House South Lawn.

Senate Majority Leader Charles E. Schumer, who helped broker the bill, called it “a record deal and a once-in-a-generation investment in New York infrastructure.” He also said it would create jobs throughout the state.

Albany International Airport is expected to receive $28.7 million in federal funding, according to Schumer’s office.

Airport CEO Philip Calderone said some of the money would be used for three projects — modernizing the terminal, expanding the airport’s cargo facility and building a new aircraft hangar.

Calderone said the terminal was built before Sept.11, 2001, and the Transportation Security Administration’s checkpoints installed afterwards have created congestion during peak travel periods.

He said improving airport infrastructure will allow people to travel more easily, improve the quality of life for local communities and boost the economy.

“Airports are the front doors of our state and of our communities, and they help drive business growth and development, and attract visitors, tourists and residents to our state, into our communities,” Calderone said.

According to Schumer’s office, the Capital District Transportation Authority will receive approximately $113.9 million over the next five years if Biden signs the bill as expected.

Carm Basile, CEO of CDTA, said the funding will provide stability to CDTA and strengthen the transportation system in the Albany area.

“This is a great win for the transportation industry. For CDTA, this means a 30 percent increase in the federal funding we receive on an annual basis,” Basile said in an email. “This will allow us to put more service on the street and to develop innovative projects throughout the Capital Region.”

Albany County Executive Daniel P. McCoy said the county has approximately 300 miles of county highways, 86 bridges and thousands of culverts that need to be maintained.

“Beyond that, this funding will support my commitment to providing high-speed internet access to every county resident by 2023 and the electrification of the county vehicle fleet by 2030,” McCoy said in an email.

The infrastructure bill also includes funding for highways and bridges, as well as an estimated $175 million over five years to expand the electric vehicle charging network in New York, according to Schumer’s office.

“For decades, we have put investments in critical infrastructure on the backburner, leaving communities in our Capital Region and across the nation unequipped to deal with crumbling roads and bridges, insufficient public transit, unreliable broadband and countless other issues,” U.S. Rep. Paul Tonko, D-Amsterdam, said in a statement. “Our bipartisan infrastructure framework tackles these most pressing needs.”