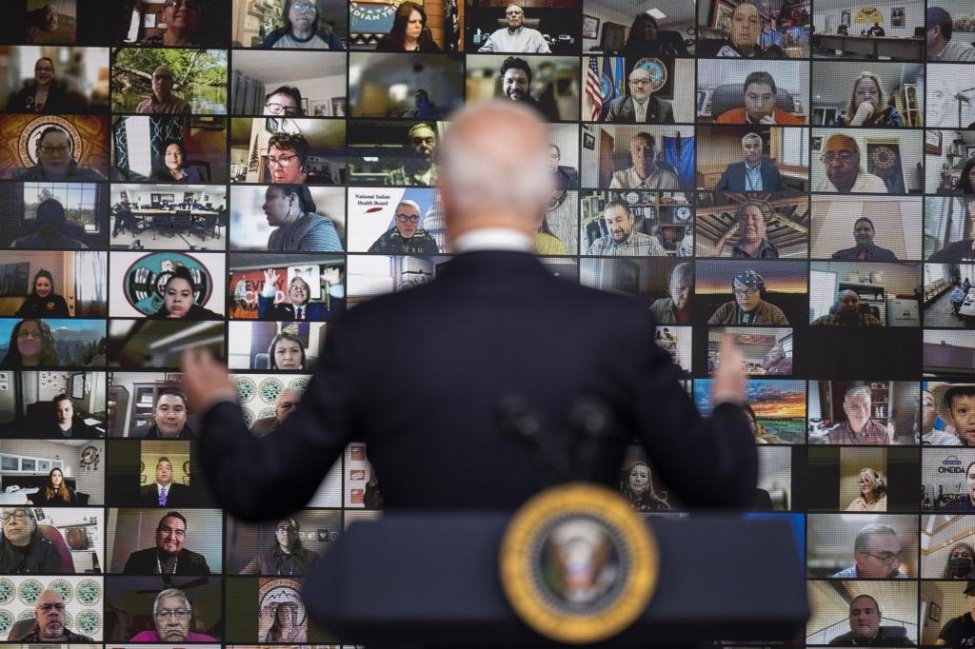 President Joe Biden participates remotely in a Tribal Nations Summit from the Eisenhower Executive Office Building in Washington, D.C., on Nov. 15, speaking with tribal leaders and announcing a number of steps to improve public safety and justice for Native Americans. Photo by Jim Lo Scalzo/EPA-EFE

A proposed amendment to the Indian Health Care Improvement Act is intended to improve healthcare access for American Indians who live urban areas, its advocates say.

The Urban Indian Health Confer Act would require the Department of Health and Human Services to consult with the 41 Indian organizations — nonprofits governed by Native Americans — on healthcare policies for the 2.8 million American Indians and Alaskan Natives who live in urban areas.

The bill was introduced by Rep. Raul Grijalva, D-N.M., and co-sponsored by 19 members of the House. It passed the House on Nov. 2 and awaits Senate action.

Roughly 70 percent of American Indians and Alaskan Natives live in urban areas and face inequities in healthcare access because the the Department of Health and Human Services is not required to consult with the urban organizations when it creates policies that impact urban Indians, Grijalva said.

Other American Indians have moved off reservation lands to pursue higher education and employment opportunities.

According to the Department of the Interior, the United States has a trust obligation to provide American Indians with healthcare, education and welfare in exchange for settling Native lands. This trust responsibility also follows individuals once they leave reservation land.

Yet, for many American Indians who move off tribal land, healthcare options are limited.

“Passage of the Urban Indian Health Confer Act will provide urban Indian health organizations with a critical role in planning and decision making for Alaska Natives and American Indians. I look forward to working with my counterparts in the Senate to get this bill over the finish line and onto the president’s desk,” Grijalva said in a Nov. 2 press release.

Sunny Stevenson (Walker River Paiute), the federal relations director for the National Council of Urban Indian Health, said Urban Indian organizations are under-resourced, underfunded and not found at all in all metropolitan areas.

Stevenson said the bill supporting urban Indians will not cut into IHS funding and will not disadvantage Indians living on reservations.

“An urban confer policy with any part of the administration does not conflict, supplant or undermine any tribal consultation or government to government relationship,” Stevenson said.

RoxAnne Unabia (Chippewa), executive director of the American Indian Health Service of Chicago, said benefits of the confer act would be monumental.

“We’re hoping through urban confer, we’re able to explain and discuss with Congress how severely funds are needed for urban natives,” Unabia said. “I have so many people who are opting to pay for their heat versus coming in for a visit.”

With additional funding, Unabia hopes to hire specialists, such as rheumatologists and cardiologists, to come into the clinic to better assist urban Indians.

American Indians are disproportionately affected by health problems, including lower life expectancies and higher rates of chronic disease, such as diabetes, according to the Indian Health Service.

Unabia said the clinic has to outsource appointments, meaning urban natives pay more and wait longer. Additional funding also could bring down co-pays for medications, which many of her patients cannot afford.

“Our patients have to decide between paying utilities, paying rent and buying prescriptions. And they want to keep living in their homes. They want a roof over their heads and their families’ heads,” she said.

Unabia said 40% of her patients are uninsured because they don’t qualify for Medicare and Medicaid, and many urban Natives do not have health insurance.

“When families were on the reservation, we were always told it’s part of your treaty right to receive health care,” Unabia said. “But the U.S. government has never fully fulfilled any treaty obligations.”

For Stevenson, an urban confer would be the first step toward improving urban Indian health, but confers need to be monitored to prove successful. She said it’s important for Urban Indian Organizations to complete a satisfaction survey after conferring with a federal agency. Then, the urban Indian organization’s feedback should be made public immediately.

“If the administration’s interested in furthering transparency, staying accountable, and being held to a high standard, it’s important that they release those survey results as they come,” Stevenson said.

Stevenson said federal agencies also will need to establish a point person to communicate with Urban Indian organizations. The point person should not only relay information but also be in a position to affect change, she added.

“If you have people on there that are just there to listen and relay information, that’s really insufficient,” Stevenson said. “You need to have people there who can agree to make commitments on behalf of Indians.”